Humans have relied on plants for their healing properties as long as we’ve been incarnated on this planet. Sumerian clay tablets from ancient Mesopotamia contained instructions for the herbal preparation of more than 200 different plants, including poppy and mandrake. A Neanderthal burial site discovered in the 1960s contained branches of a bush known to contain ephedrine, commonly used to treat breathing ailments, and several wildflowers that also have medicinal properties.

Harriet Tubman was a skilled wildcrafter who used her knowledge of plants to keep babies quiet while she helped their parents escape slavery and tended to Union soldiers during the Civil War.

In “Braiding Sweetgrass: Indigenous Wisdom, Scientific Knowledge, and the Teachings of Plants,” Robin Wall Kimmerer gently teaches readers how to see and receive the bounty of land as a gift. “The thriving of one in the best interest in the other,” she writes. “This, to me, sounds a bit like love.”

Last summer, under the weight of the pandemic and social justice protests, I turned to my deep network of Black, Latino and nonbinary herbalists around the country, who were generously sharing their ancestral knowledge of plants online to care for their communities and help them cope with the waves of grief, anxiety and depression. As we head deeper into the winter season, I spoke to several of those herbalists about how they are preparing themselves, their families and their communities for the intensity of the months ahead. 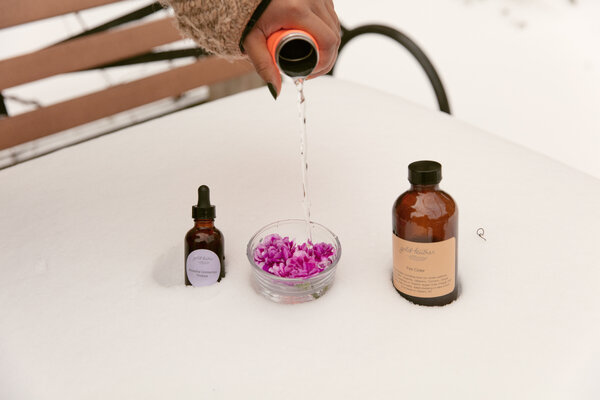 “In a moment of intense transition, I’m asking myself questions like: Are you rested? If not, what can you do to rest,” said Marisa Hall, 28, a Black femme community herbalist in the Bay Area. “Let’s reframe rest as part of the work. That’s really easily lost. We see rest is the antithesis of revolution or productivity but it is the bank — it’s what is going to allow any of us to do any type of work sustainably. And especially for Black people, it can feel impossible to just rest, but it’s so important.”

“I’m slowly learning to expect less from myself and to let go of trying to function at 100 percent,” said Salimatu Amabebe, one of the founders of a food collective called Black Feast in Portland, Ore. Ms. Amabebe recalled the terrifying fires that swept the Pacific Northwest, damping the sun and polluting the air for days. She and her family still haven’t recovered. “It’s challenging to manage your mental health right now and not fall into a state of total apathy while still trying to work from home and meet deadlines.”

“Even though I am in California, and we don’t really have seasons, I still try to align with the energy of winter,” said Jamesa Hawthorne, 29, an herbalist in Los Angeles. “It’s a good time to do dream work. I like mugwort for that. It helps with my mental health, to go inside my imagination and play a little bit. I use tinctures and tea blends with kava kava.”

"I am a chef, and I love how we can integrate medicine into our foods,” said Candace Taylor, 38, who lives in Winooski, Vt. “I love using cinnamon, star anise, cardamom in dishes, which all support lung health. Same with curries made with cayenne, turmeric, cumin and mustard seed, which is so powerful for lungs.” She also loves using eucalyptus, she added, “in a diffuser or even taking a hot bowl of water, placing plants like wintergreen, ginger, rosemary or cinnamon into the water, and draping a hot towel over your head and lowering your face to the bowl for a quick steaming session.”

“I’m growing mushrooms for the first time this year,” said Cheré (rere) Bergeron, 33, an herbalist in Minneapolis. “I put reishi and chaga mushrooms into everything I make, including my elderberry syrups and my bone broths. They also have a lot of vitamin D, and as we head into winter we aren’t getting enough sunlight and that’s also important. In fall and winter, the energy of the plants is traveling downward, back into the earth, so this time of year, eating things that grow in the ground can mirror that action and in our own bodies, helping to slow down so we can rest and move slower, at the speed of molasses.”

“The very first plant that I picked in herbalism school — like an herbal tarot card — was yarrow,” said Arvolyn Hill, 31, an educator and herbalist in Harlem. “It’s an abundant plant on the land I grew up on, it’s a warrior plant.”

“Part of the challenge of preparing winter medicines for my own household is making sure there’s something my wife, Naima, who is a picky eater, and a variation that Luna, my 3-year-old daughter, can take,” said Suhaly Bautista-Carolina, 34, an herbalist in Brooklyn. “We do a lot of hot chocolate, made with plant milk and those big bricks of Mexican chocolate, and I add heating spices, like cinnamon, nutmeg or star anise, and a bay leaf for good fortune. It is a very family-friendly way to get plant medicine in.”

“Nourishment and hydration is important,” said Berenice Dimas of Hood Herbalism, an educational herbal community and resource in Oakland, Calif. “I am checking my capacity more regularly and taking screen and social media breaks when possible. Along with all these little things, I am also sharing information with people that are taking my herbal classes. They are learning different ways to bring in plant medicine to support us during these times.”