The term fashion forward has become something of a cliché, but if you think about what it means—what it really means—then Casey Cadwallader is it. Since taking the reins as artistic director of Mugler in January 2018, Mr. Cadwallader has engaged with the house’s iconic ’80s and ’90s design vernacular, but with an eye toward creating trends (not following them) and for using fabric development to drive the brand forward. So it might come as a surprise—or perhaps no surprise at all—that he also serves as design lead for Aztech Mountain, a luxe, Aspen-based ski brand that is helping drive the ski world’s conversation around performance gear.

It isn’t uncommon for designers to undertake two creative jobs at the same time. Today, we see this with Gabriela Hearst for both her own brand and Chloé, Miuccia Prada for both Prada and Miu Miu, Jonathan Anderson with JW Anderson and Loewe, and Virgil Abloh for both Louis Vuitton and Off-White, to name a few. But what feels different about Cadwallader isn’t just that Mugler and Aztech are from different aesthetic universes; it’s that they are from different merchandise categories altogether. It’s almost impossible to imagine what a Venn diagram of these two brands might have in common or a retailer that would carry both in the same shop. 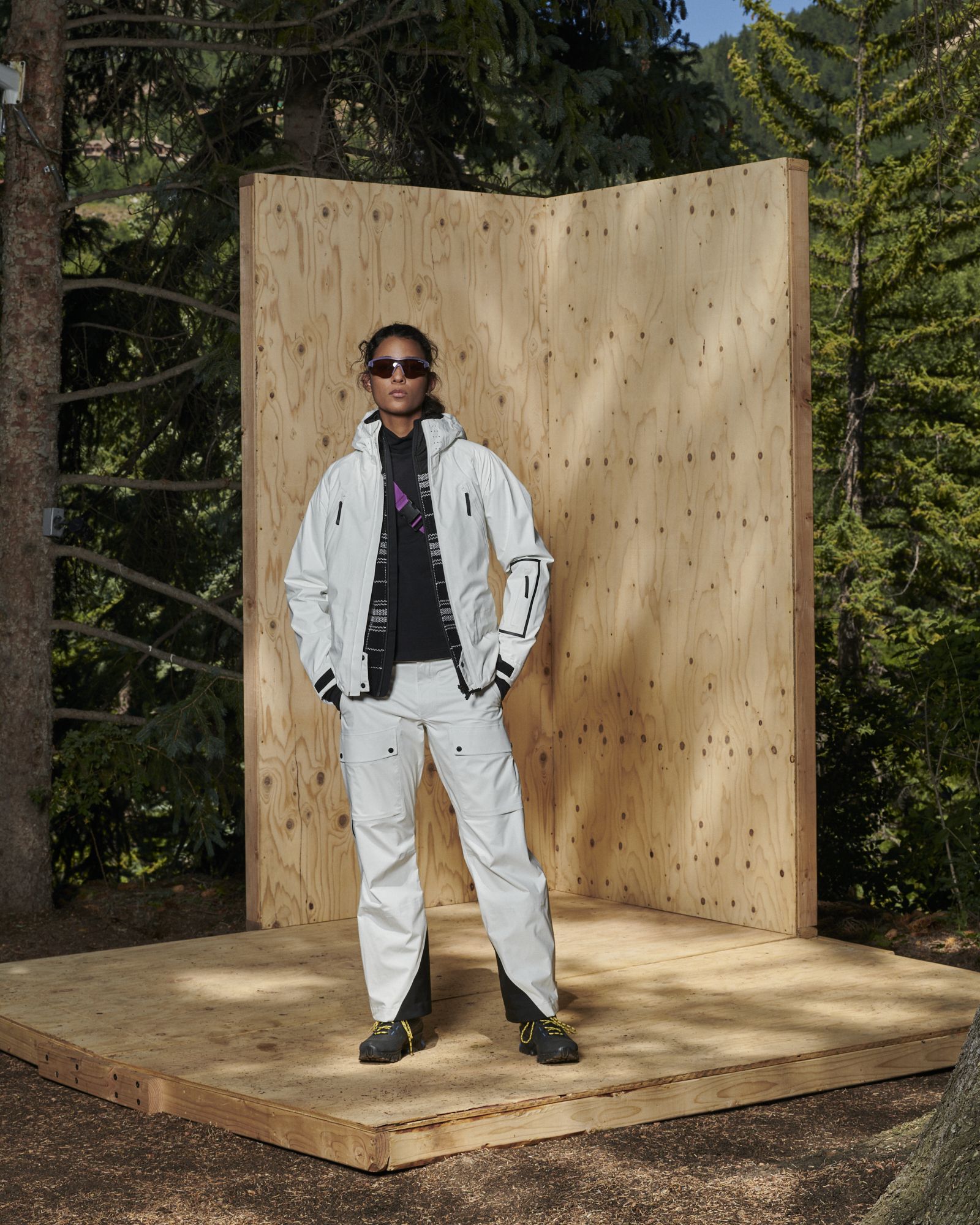 Cadwallader’s calling cards at Mugler include exaggerated and futuristic tailoring, technical fabrics, and dangerously down-to-there sheer paneling. Denim, too, seems to be a through line in each of his Mugler collections, with each season offering high-fashion takes on the all-American classic. Sure, Miley Cyrus in a sheer Mugler bodysuit gets a lot of attention on Instagram, but the staples that end up on the retail floor each season reverberate with—dare we say it—utilitarianism. Whether it’s Parisian glamour for a brand like Mugler or ski gear for Aztech, the yin-and-yang-type relationship between vision and function informs all of the designer’s work. Mugler and Aztech might have different missions, different customers, and different design languages, but both are fixated on the idea of moving things forward, whether it’s the world of European high fashion or the world of alpine sport.

“Good designers can really be a chameleon,” Cadwallader says in a phone interview about how he goes between the two design worlds. (It’s worth noting that Cadwallader’s head-of-design role with Aztech is more of a consensus-based design approach in conjunction with his business partners, whereas he is very much the top of the hierarchy at Mugler.) He intimates that now, after seven years with Aztech and three at Mugler, he feels a synergy between the two jobs. 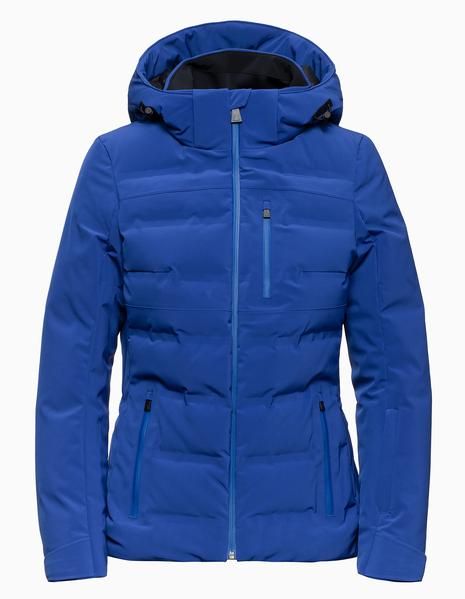 On a practical level, Cadwallader says that he draws major inspiration for both gigs from the annual ISPO Munich sports industry trade conference in Germany each February. Part of the conference includes exhibitions of the latest in performance gear technology—the newest fabrics, welding technologies, buckles, snaps, and so forth. “I started going there because of Aztech in the beginning, but now I bring people from Mugler with me because it’s fascinating,” says Cadwallader. At other fashion trade shows, he might find the same old buttons made from mother-of-pearl or horn, but by visiting a sports trade show such as ISPO, he might find things that are more technologically advanced and changing more frequently, such as magnetized, laser-cut, or rubberized buttons. Working with Aztech has certainly upped the ante with Cadwallader’s technical fabrications and finishes at Mugler. Performance design is a different way to exercise the couture brain. “There’s definitely something that crossed back over for me,” he says. “They cross over and inform each other.”

The gig with Aztech is also highly personal. A New Hampshire native, Cadwallader learned to ski at a young age, in an era when ripstop jumpsuits and unflatteringly bulky jackets dominated skiwear. After kick-starting his career with design jobs at Narciso Rodriguez, J. Mendel, and Acne Studios, Cadwallader was able to look back with a critical eye. “There used to be a lot of very odd aesthetics with skiwear,” he says. “You would just wonder, ‘What’s the brain that put that together?’” 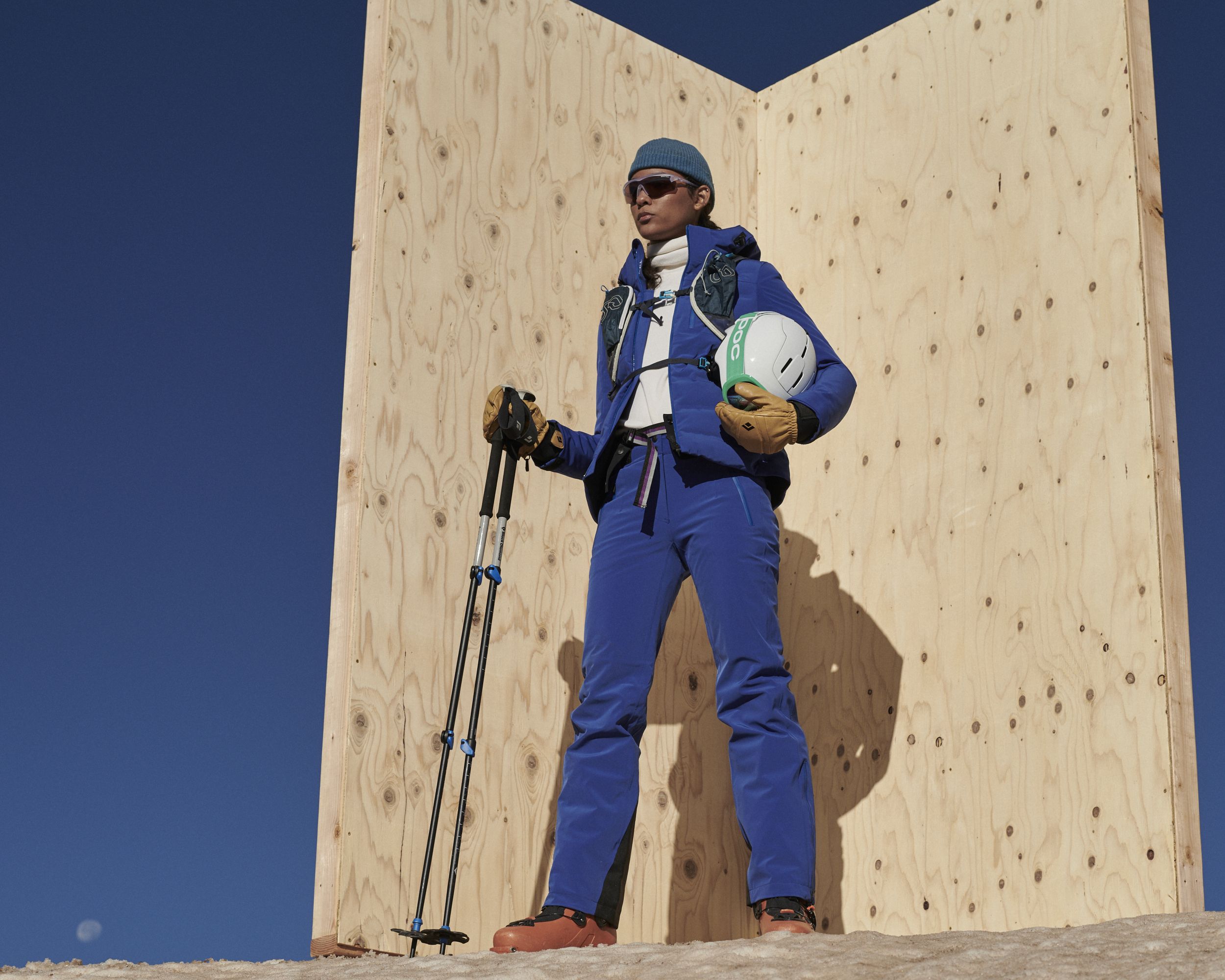 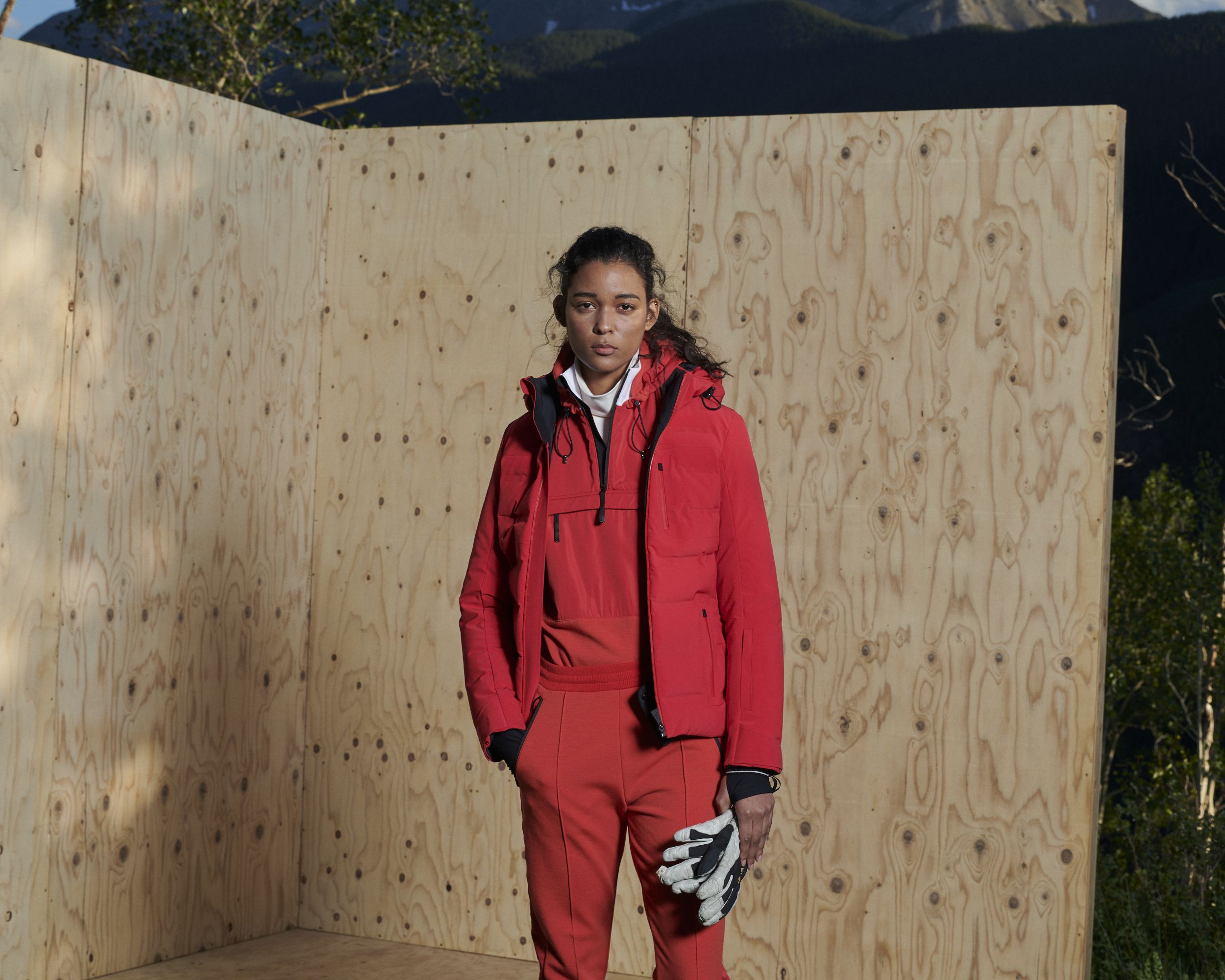 So when he was invited to join Aztech as a partner seven years ago, it became a chance not only to revisit his lifelong love of skiing, but also to create some of the best performance jackets on the market. Case in point: the Pyramid Jacket, new this season. Made from a durable, breathable, waterproof, and interesting motile 16-way stretch nylon, it combines performance with style in a way that few ski brands manage to achieve. The coat’s carefully tailored, articulated puffer ridges have the slightest “thermowelding” space between them—offering the warmth of a traditional puffer jacket, but the silhouette of something much more flattering and form fitting. Smooth panels over the shoulders and forearms keep the look from becoming too “Michelin Man,” without sacrificing warmth. The attention to silhouette on this piece is almost Mugler-esque. These aren’t just clothes that look beautiful; they perform beautifully too. 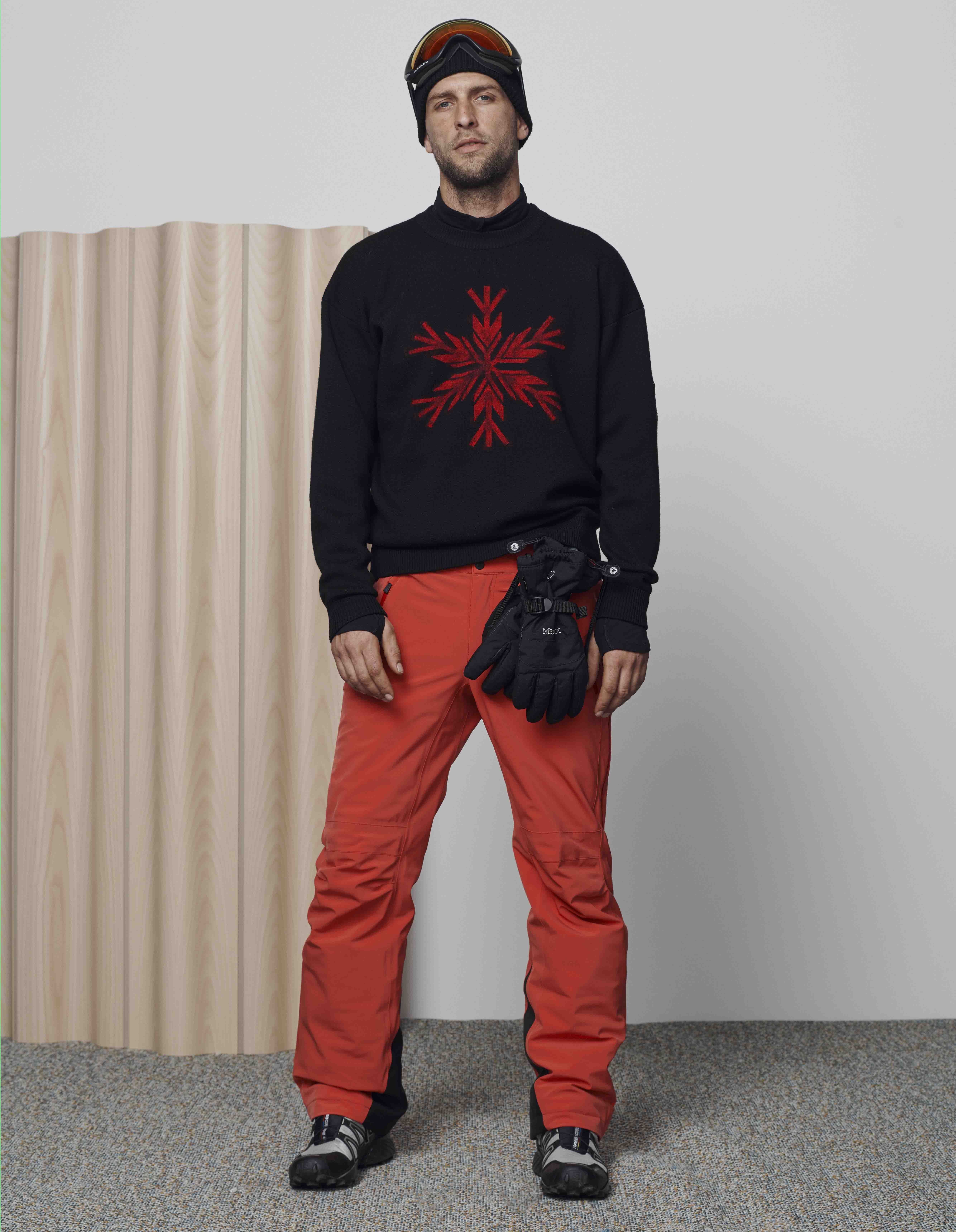 “We wanted to make things that can be chic enough and clean enough to be worn in the city, but then functional enough to work on the slopes,” says Cadwallader. “At Aztech, we all ski in these jackets and realize, this pocket needs to move, this needs to be larger, we prefer this sort of lining instead. So to arrive at the perfect product is a multiyear conversation.” 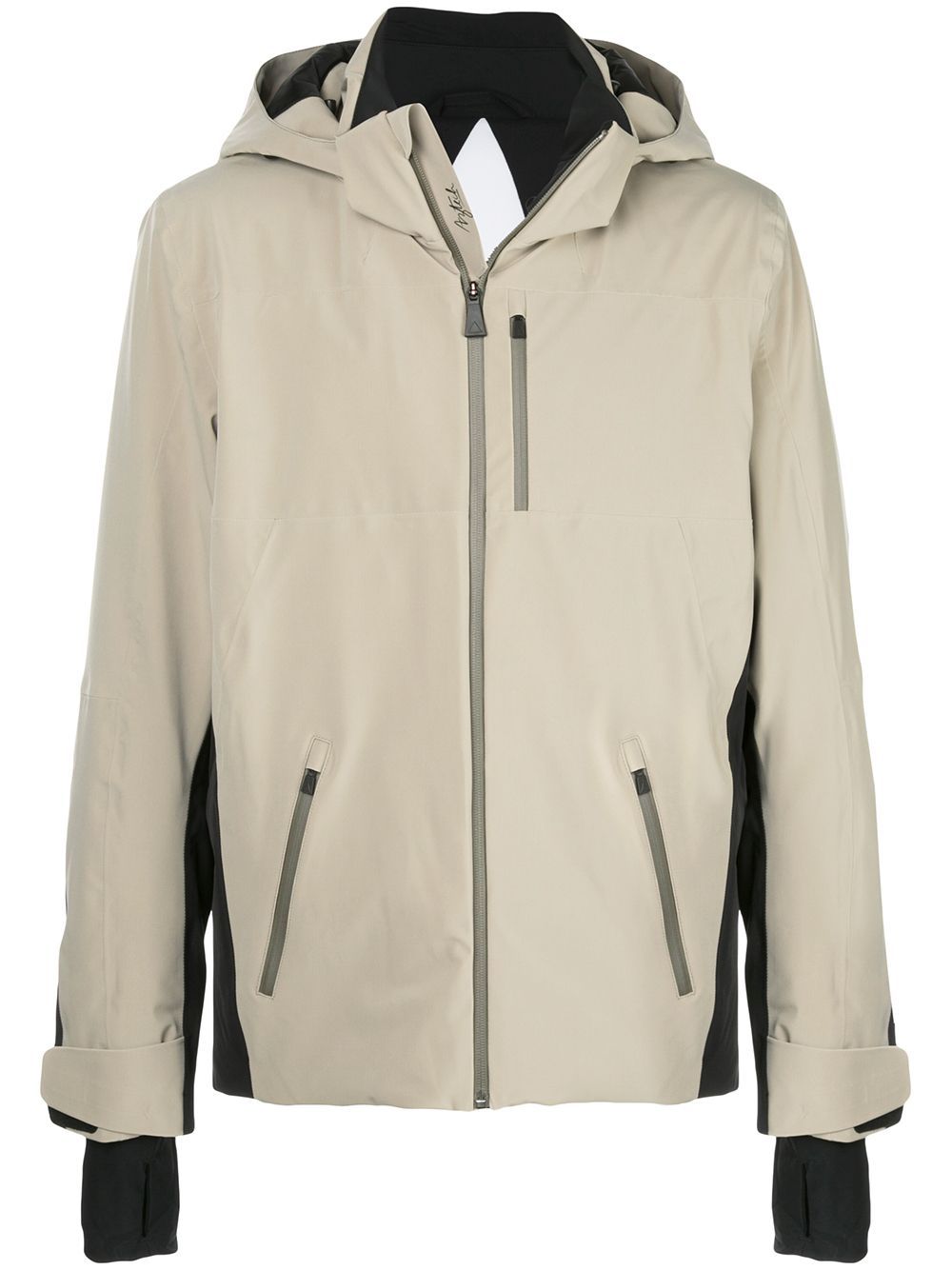 The chance to work on a highly edited product range and fine-tune it over a period of years is precisely the type of work many designers yearn for—as opposed to the mainstream (pre-pandemic) fashion market, which demands two, four, or more collections per year. “Eighty percent of the time, with a piece of clothing, it’s only for one season,” says Cadwallader. “In some cases, it’s carried through for a few years, but it’s not the same as when you do technical outerwear like what I do with Aztech. This is much more of a commitment.”