It is, by its owner’s description, a “zombie killer” dream machine — a 2021 Mercedes-Benz SUV G-Wagon/Brabus, Frankenstein-built using organs from a sacrificial donor auto, custom portal axles, 16-inch lifts that elevate the roofline to Manute Bol height, tires so pneumatic that custom bumpers and fenders were machined to give them clearance, a roof rack resembling the launchpad for a drone fleet and two-toned honeybee-colored interiors as detailed as a Dutch still life.

The base sticker price on this particular vehicle runs around $135,000. But that would be before the fashion designer Kerby Jean-Raymond, the creative director of his own successful New York label, Pyer Moss, and of Reebok, began to collaborate on customizing it with the help of the Abushi brothers, four Palestinian American siblings who, in an industrial section of Queens, operate a luxury and exotic automotive facility that may well be to the average auto-body shop what the Hospital for Special Surgery is to a walk-in clinic.

Tucked between an enormous UPS depot and opposite some desolate rail tracks in Maspeth is the state-of-the-art 15,000-square-foot Abushi facility. On any given day, one would likely encounter there some of the world’s rarest, most costly and covetable rolling stock waiting its turn in the beautician’s chair.

Take the recent torrid Thursday when a $770,000 Rolls-Royce Cullinan Mansory SUV belonging to the Cleveland Browns wide receiver Odell Beckham Jr. stood parked in the showroom, as a technician peeled away a poorly installed body wrap to replace it with another in Beckham’s signature traffic-cone orange. Nearby was a gussied up a 2021 Aston Martin UBX, a surprise gift from OBJ for his influencer girlfriend, Lauren Wood.

There at the curbside was a buglike $280,000 gold McLaren 720 S Spider sports car owned by a supermarket magnate, a member of what the writer Michael Thomas once called “the new tycoonery.” Decorated in an allover honeycomb grid, the car was also ornamented with crime tape reading “Crime Pays.” A capering figure silhouette on the door depicted Rich Uncle Pennybags, the Monopoly Man.

There, too, in the showroom’s arctic cool stood a passel of tricked out G-Wagons; a Lamborghini SVJ 63 roadster, of which only 63 were ever manufactured; and a Ferrari 375 GTB NART Spider, which is a convertible and has a market value of roughly $25 million. And there, in a service bay with floors clean enough for an “A” restaurant inspection rating, was Mr. Jean-Raymond’s G-Wagon, a piano-black hulk out of Marvel Comics, further steroided with its massive wide-body superstructure. 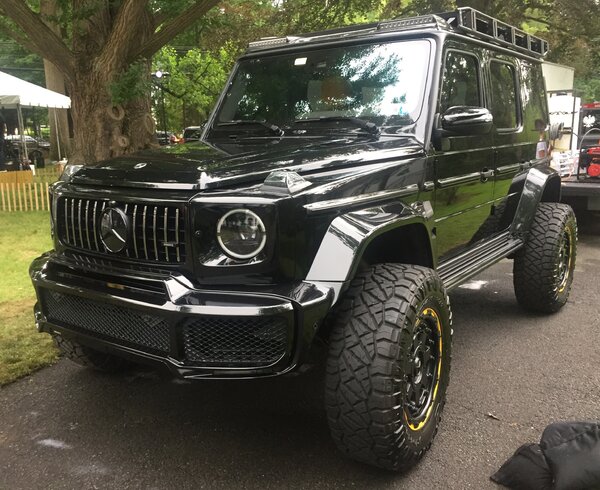 The quiet in the shop was palpable as a mechanic in spotless coveralls unpacked a set of retractable automatic steps to attach to a vehicle with door handles that sit at roughly shoulder level.

“I didn’t want it to look like I lived in Calabasas,” Mr. Jean-Raymond said of his new ride, referring to that gilded suburb in the Santa Monica mountains northwest of Los Angeles, where Will Smith, Justin Bieber and Kim Kardashian inhabit residential complexes with as much square footage as a suburban Macy’s.

Ms. Kardashian, of course, has her own G-Wagons, among them a custom neon-yellow model given to her as a “surprise” by her husband. Occasionally she posts a “snapshot” of herself posed alongside it and a neon-orange G-Wagon owned by her zillionaire half sister Kylie Jenner.

Oftentimes, if you scratch a gearhead’s chrome-plated obsession, what you uncover is something tenderer than a Proustian remembrance. In this, Mr. Jean-Raymond, 34, is true to expectation.

“When I was a kid, my dad installed Benzi boxes,” the designer said last week by phone of the removable theft-proof car radio boxes once common to the Flatbush of his Brooklyn boyhood. “I used to sit in the car with him, and that was really the only conversation he was interested in.’’

Mr. Jean-Raymond’s father, Jean-Claude Jean-Raymond, who raised his son single-handedly after his wife died, supported himself in part by patching together a variety of vehicular odd jobs. “He always had a bunch of cars he’d be fixing, and my job was to move them from side to side,” on city streets on alternate-side parking days, the designer said, adding that this began long before he’d acquired a learner’s permit, possibly as early as 13.

His own first automotive purchase, Mr. Jean-Raymond said, was a Mercedes-Benz 190 E purchased secondhand at auction for $500. “I was always into super-cars but never able to afford them.” Eventually, when success came, income rose to meet expectations, and he now possesses a garage full of Ferraris, McLarens and other exotic sports cars — soon to be joined by the G-Wagon whose ultimate value, he estimated, should surpass $800,000.

Excess inevitably springs to mind on a visit to the Abushi shop, a place that illustrates, as well as anything can, what those from the smallest percentile of wealth, in a country increasingly defined by its lack, do with money that’s often so new it is not just wet but crypto.

“People use social media and they see all the stuff that’s out there in terms of levels of wealth,” and the toys it can buy, said Steven Forkosh, a real estate developer and owner of a social media influencer agency. At 32, he has residences in four different places, a safe filled with rare Patek Philippe and Richard Mille timepieces, and a fleet of 40 luxury vehicles.

“In regards to watches and cars, as long as you buy the right thing and take care of it the right way, these things appreciate,” Mr. Forkosh said by phone last week. “For that reason, when I buy a car from a dealership, the first thing I do is take it to the Abushis.”

Even at the depths of a global pandemic, retail sales of automotive specialty products rose stratospherically in 2020, climbing to an all-time high of nearly $48 billion, according to a report released in July by the Specialty Equipment Market Association. That figure nearly doubles the amount Americans spent in the so-called aftermarket as recently as a decade ago. Much of that spending was driven by consumers under 40 and a newfound fixation among them on the type of retail “exclusivity” epitomized by Supreme “drops” and hyped-up limited-edition bags from multinational Goliaths like Louis Vuitton.

If, as Della Domingo, a spokeswoman for SEMA, said recently, the aftermarket trade constitutes the “auto industry’s version of fashion,” shops like the one in Queens run by the Abushi brothers are the equivalent of haute couture salons. As at those rarefied places, with their gilded ballroom chairs and the reverent hush great wealth induces, the gifted and often anonymous craftspeople with the wristband pincushions or wielding power wrenches most often have origins in the working classes.

And so, too, do the Abushis, though with one difference. They are wealthy themselves. Though raised in a tightknit first-generation clan by parents whose lives were often defined by displacement and financial reversal, they became rich in their own right following the sale, in 2014, to a venture capital group of a chain of 100 Verizon franchises built across the western United States in barely 10 years. Though declining to disclose the precise amount of the deal, they ballparked it at $50 million.

With little debt and their own substantial grubstake, the four Abushi brothers — Abed, Yas, Rosco and Fadi — set about looking for a business that would keep them united as a unit, combine a shared passion for cars (their own collection numbers over 100) and feature their name on the door. In 2017, they relocated from Northern California, where the retail custom market was predictably saturated, settling on Queens as a hub because — surprisingly and despite the dense pack of wealth in the country’s financial capital — nothing quite like it existed.

“Before them, you’d have to take your chances and go from shop to shop,” Mr. Jean-Raymond said. “And you were always getting ripped off.”

Sitting in the Abushi showroom last week, Abed Abushi, 41, explained how across the decades their peripatetic father had built and lost a number of businesses, among them a wholesale fruit concern in Texas, a string of bodegas and supermarkets around Oakland, Calif., and a confectionery distributorship in New Jersey. Occasionally collateral damage from tragic international events played a role in his family’s fate, Abed said: “After 9/11, no one would do business with my dad and so he went bankrupt.”

“But his view was always that money comes and goes but family is the only real wealth,” Rosco Abushi, 35, said then. “Because of that, we’re never afraid to go back to nothing because we had nothing.”

Given their clientele and an economy that seems to churn out digital millionaires on a conveyor belt, that seems unlikely. Consider the story of Abushi clients like John McPheters who, with his business partner Jed Stiller, established a retail consignment store in 2015 to channel the booming resale trade in rare Supreme drops and limited-edition Nikes. Four years later that business, Stadium Goods, sold to the online retailer Farfetch for $250 million.

Once it had, Mr. McPheters decided the time had come to reward himself with a car that is often a gateway drug for big-ticket automotive consumption: a Ferrari. “I don’t really go that hard at it,” he said this week, referring to a collection that nevertheless includes a robust assortment of the type of premium gas guzzlers that stoke the fantasies of every Hot Wheels fanatic.

“I’m not some crazy guy that’s going to be stacking up hundreds of cars,” he said. “But, when I was a kid growing up in New York, I used to go with my parents on weekends to dealerships to look at cars we were never going to buy. So it’s great when you finally realize you can get something you’ve been pining for.”

It is the texture of longing that gives meaning to the fantasies at the heart of car collecting, the rapper Saint Jhn explained last week from a recording studio in Los Angeles, where he was preparing to embark on a 27-city tour.

Even in an autopilot, ride-share world, few relationships with material possessions remain as emotionally freighted as that with our cars. Saint Jhn was introduced to the Abushi brothers by his friend Mr. Jean-Raymond when he first began a car collection.

“My dream had always been an Aston Martin — I was a big James Bond fan,” said the rapper, whose given name is Carlos St. John Phillips. “I had to learn the difference between the dream and the reality of your dreams.”

That is, when he finally earned enough to acquire the James Bond ride of his childhood dreams, it turned out it felt cramped and was awkward to handle. It was the Abushi brothers who gently guided him toward the assembly of an automotive portfolio comprised almost totally of convertibles, among them a Porsche Spyder, a Ferrari 488, a Ferrari Dino Spider, a McLaren 675 LT Spider. In the way of these things, he also owns a Mercedes G-Wagon that the Abushi brothers customized.

“I come from a really small circle of people who think singularly about one thing: magic,” Saint Jhn. “I don’t mean sticks and wands.”

Rather, he suggested, the magic is that of honesty and ethics, rare enough attributes in any industry, let alone a the car business. “Magical people believe in other magical people that are involved and invested in their work — people that are honorable, stand-up, don’t change the rules when it’s convenient” Saint Jhn said. “When Kerby introduced me to the Abushis, he said, ‘You want magic? These are your guys.’”