A FIRE breather who's training to be a nurse has vowed to perform with flames again – despite enduring horrendous injuries when she caught alight onstage.

Kristy Cullum, 35, from Basingstoke, Hampshire, was performing at a charity gig in June 2019 when her fire breathing stunt went horribly wrong. 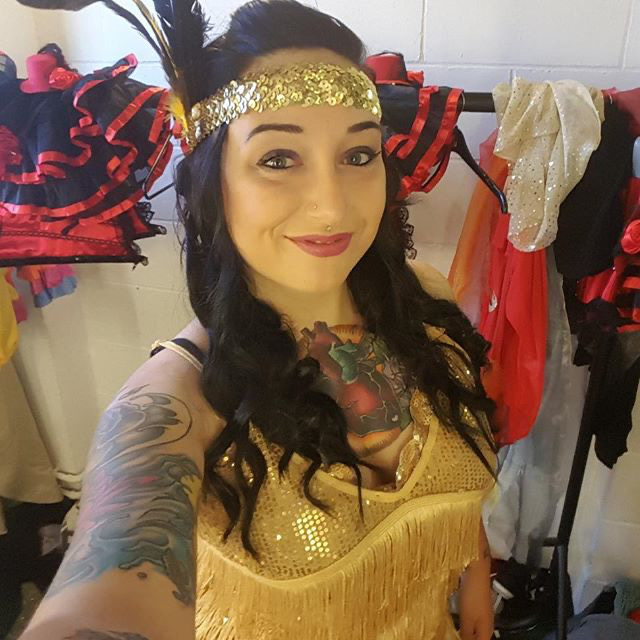 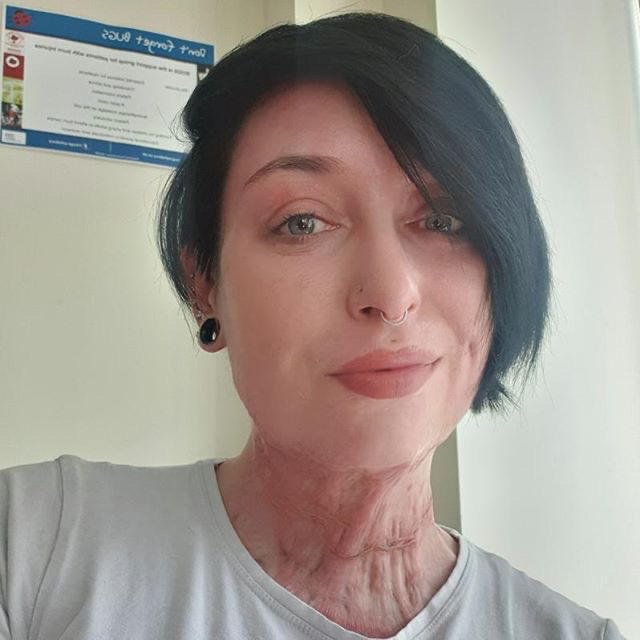 With the flammable liquid fuel in her mouth, ready to spit onto flames, she spluttered and coughed fuel into the blazing sticks in her hands – after a droplet of liquid hit her windpipe.

Thinking fast, Kristy spat the flames out onto her chest and used her arms to shield her airway and her eyes from the flames coming up from her neck and across her face.

She said: "I had a mouthful of paraffin and, just as I was ready to start the fire breathing tricks of my routine, I felt a droplet of liquid hit my windpipe – forcing me to splutter involuntarily. 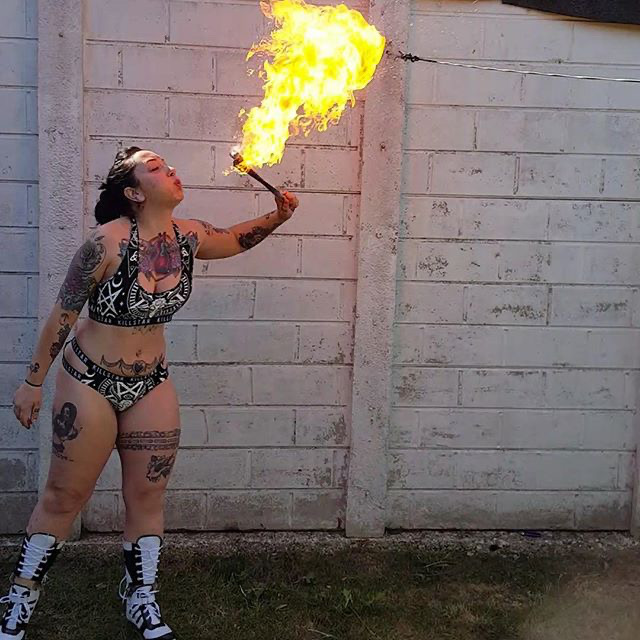 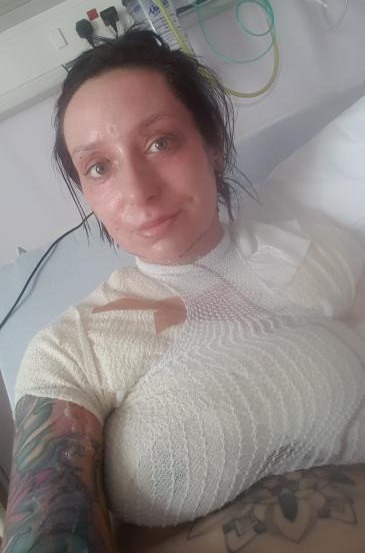 "That cough sent fuel spraying onto my fire sticks which ignited the paraffin instantaneously.

"The adrenaline just kicked in for me – I knew exactly what I had to do to survive.

"The worst case scenario would have been scorching my windpipe by breathing in the flames, so I quickly spat all the burning fuel onto my self – burning my lips, chin and chest severely but saving my life.

"Then I brought my arms up to my face with one across my nose and mouth so I could breath, and the other protecting my eyes from the fire."

The charity show, on June 8, was a hospice fundraiser organised by Kristy's local NHS trust.

So, luckily, the audience was filled with medical professionals – who rushed to help her.

At the side of the stage, Kristy was doused with a fire extinguisher and an ambulance was called.

She said: "I work as a health care support worker and I'm training to be a nurse so I'm good in a crisis.

"It is part of my make up thankfully, so in the moment I was able to stay calm." 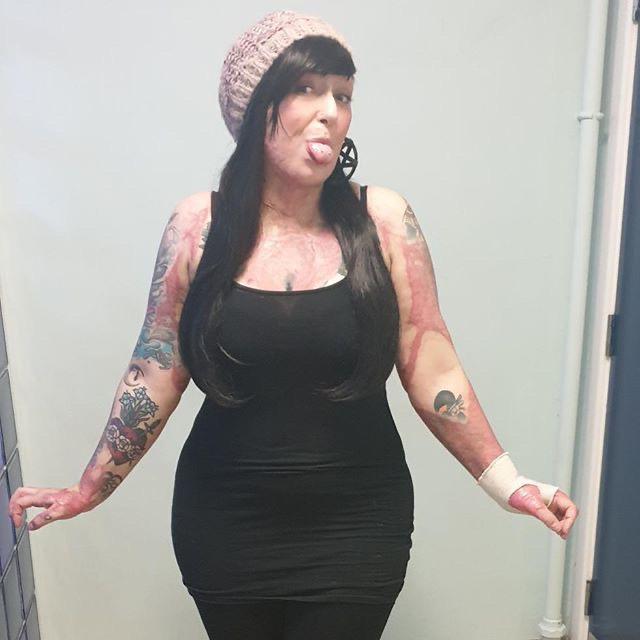 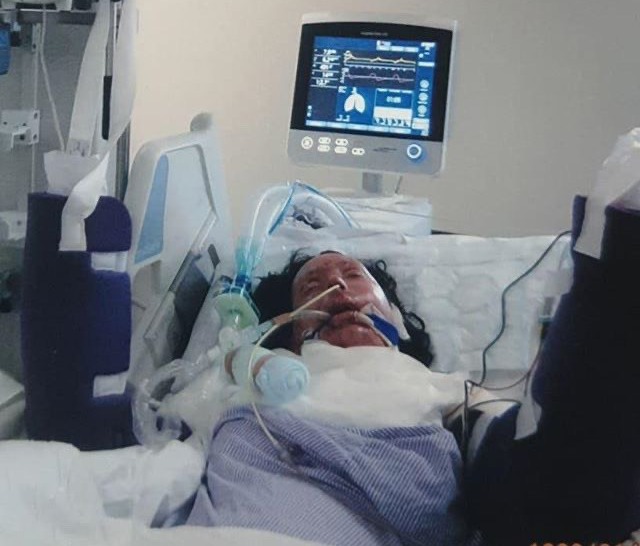 In hospital, Kristy was put in an induced coma for two weeks.

She also received a skin graft on her neck and is still undergoing gruelling painful laser treatments for her burns.

She said: "My recovery has been really hard on me both physically and mentally.

"I suffered with a lot of guilt about missing out of caring for my daughter for a month.

"I co-parent with her dad and she spent most of the week with me but that balance has shifted now.

"I also worried about the trauma I'd inflicted on my audience that day by frightening them so much."

Fire breathing is off the table but I do want some element of risk. I love the rush and how powerful performing with fire makes me feel

Despite the shocking accident and long recovery ahead of her, Kristy says she intends to perform with fire again.

She said: "At the moment, I am only singing as part of my old act.

"But when I get a full range of motion back and work on my confidence, I absolutely want to work with fire again.

"I won't perform the stunt that got me burned. Fire breathing is off the table. But I do want to put on a show with my flaming sticks with some element of risk.

"I just love doing it, I love the rush and how powerful performing with fire makes me feel. 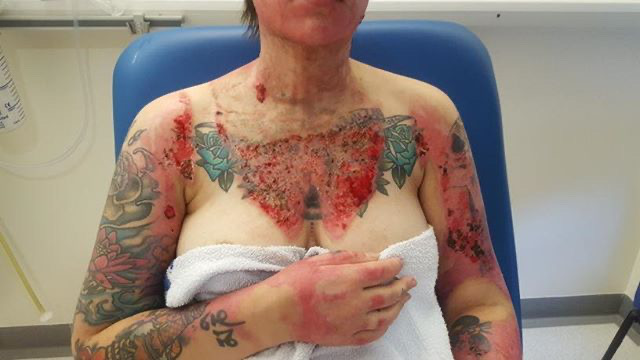 Fire breathing is when someone makes a plume of fire by breathing fuel over an open flame.

Professionals normally incorporate fire breathing into a show with other skills, and train for years to minimise the risk.

But regardless of the precautions taken, it is always a dangerous activity – which could cause injury or even death.

As well as the risk of burns, long-term exposure to the fumes and fuels used can cause other health problems.

"People have said I am selfish and crazy putting my daughter through the worry of me performing again.

"But I try to liken it to a car accident – if you crash and recover do you get back behind the wheel again?

"I don't think in that scenario people would say you were selfish, they'd say well done."

Now Kristy is easing herself back to work as a health care support worker and hopes to build up her strength enough to start nursing in October.

She said: "I've worked for the Basingstoke and North Hampshire NHS trust for 17 years and they've been amazing to me through all of this.

"The support I've had from friends and colleagues has inspired me to give back as much as I can going forward.

"I want to show my daughter that if bad things happen, and they will, there are risks in everything you do, what is important is how you respond and how you grow."

Recently, an NHS paramedic hit back at trolls who shamed her for wearing full face of make-up at work.