“It’s Never Too Late” is a new series that tells the stories of people who decide to pursue their dreams on their own terms.

Rose Young has an uncanny ability to adapt to demanding jobs and intense situations. She’s been an FBI agent focusing on white-collar crimes; a lawyer practicing insurance litigation; and, after moving back to North Carolina from Lafayette, La. with her husband and daughter in 2003, a health care compliance officer.

But the one pursuit she feared, though desperately ached to do, even as a child, was to go horseback riding. “I grew up in Hamlet, a small railroad town in North Carolina,” said Ms. Young, 65. “I was five when I saw my first horse and longed for a lesson. I got led around once or twice by a neighbor, who had a horse on their farm, but that was a rare treat. I never got on a horse again.”

Several months before the pandemic Ms. Young, then 63, took her first English riding lesson. (She fortuitously met a woman at work who connected her with an instructor willing to take on an older student.) One class became two, which quickly turned monthly. Then it became a yearlong project. Then a life-changing experience. (The following interview has been edited and condensed.) 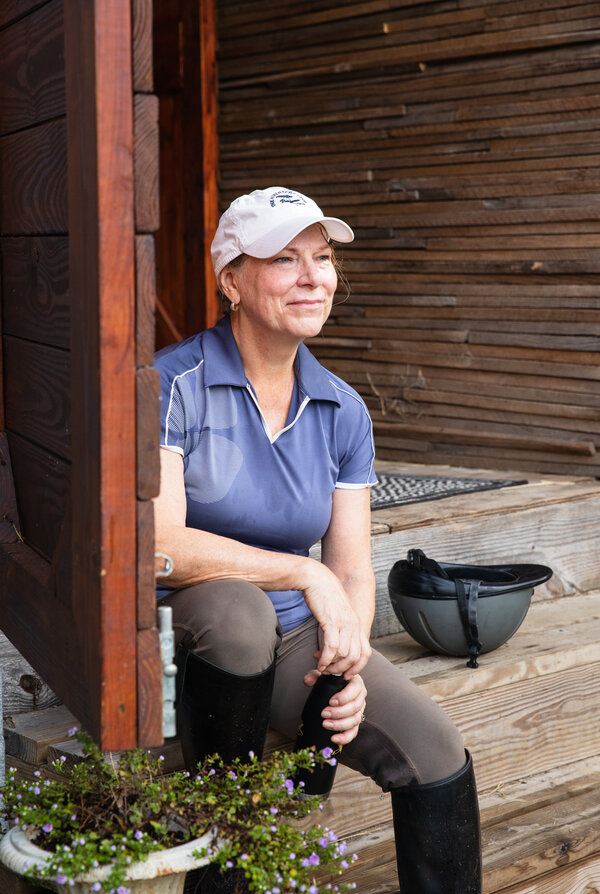 Why didn’t you take lessons as a child?

I grew up in a modest home. My parents were blue collar and worked really hard. There was nothing for extras. So I convinced myself riding wasn’t for me, which is sad. When I got older, I could have made time to do a lesson a month but I was intimidated and felt uncomfortable. And there was fear.

What were you frightened of?

Falling off or injuring myself. But in 2003 I was diagnosed with breast cancer and had a mastectomy. That changed things. That’s motivation. You have to follow your dreams when you have a chance because you don’t know how long you’re going to have the chance.

How did you find the courage to take the first step?

I didn’t let breast cancer scare me, and I didn’t let it take the joy out of my life. That would have been a disaster. I decided I was going to have another life. Learning to ride was about finding a new joy. It was also a reward for surviving something very dark and coming out that other side.

How did you get started?

Even though I live in an area where a lot of people own horses, I had to find someone willing to make themselves and their horse available to an older student. Plenty of places train kids. To find someone to take a chance with an older student, who runs the risk of injury, or might not be open to learning, is harder. It took a month for me to find my first instructor. I also read books and watched countless videos.

What have been some of your biggest challenges?

Finding the right instructor, and then finding the right horse. Right now I’m on my fifth instructor and sixth horse. I finally think I’ve found the right one. Also getting over the fear of falling off or injuring myself. I’ve fallen four times and gotten one concussion. I had second thoughts about continuing. I thought maybe I was crazy to do this. I took a few weeks off. Then I tried another horse and another, until I found one I wasn’t afraid of.

When was your light bulb moment?

I had a few friends who got into riding later on in life; that was inspiring. Then an older friend who had a knee replacement and who thought she would never go back to this, decided to start competing again. That was inspiring, too. I thought, ‘if she can do it, so can I.’

What has it felt like to finally be on a horse?

In the beginning it was more fear-inspiring than awe-inspiring. I forced myself to breathe and disperse the anxiety. Horses are beautiful, intelligent and sensitive. Their eyes are soulful. There’s nothing better than being up there and feeling real synchrony and connection with another being. We are both moving with the same purpose. It’s a fleeting, effortless, flowing connection. You feel outside of yourself. And there’s something very alluring and empowering about being able to control and influence the behavior of something that is larger than you.

What have you learned about yourself during this time?

That I’m not afraid to fail. That in the interest of learning something new that’s valuable to me I’m willing to look foolish. That you can’t rush this process. That took me a while to understand. I wanted to learn it all in a month. That didn’t happen. I’m still learning. I still have a long ways to go. I suppressed my desire to ride for so long because it was inconvenient or expensive or took too much time or was out of reach. Those were excuses to justify my inaction. I realized that was stupid. I wanted to do this as a kid, I learned I needed to give this to myself now.

How has your life changed since you’ve been riding?

It has been enriched by this process. Small victories add up to a bigger goal. I’ve learned to slow down and enjoy each moment that I’m with the horse. I’m trying to take pleasure in the feeling of accomplishment.

What are your future plans?

My next big step is to lease a horse in October which would mean getting to ride outside of a lesson. I’d be on the horse alone. You have to get to a certain level of competence before you can do that.

What has riding given you that you didn’t expect?

It has intensified all aspects of my life. It’s made everything more interesting, brighter, more alive. It has rejuvenated my curiosity and interest level in everything around me.

What would you tell people who feel stuck and are looking to make a change?

Think back to what made you happy when you were young and see if that’s something you can reach back to for inspiration or joy. Then find the time and the ability to do it.

What lessons can people learn from your experience?

Don’t be afraid of embarrassment or opening yourself up to criticism. You have to be OK with not having mastery over something. And don’t let fear stand in your way. It will get less scary every time you try.

We’re looking for people who decide that it’s never too late to switch gears, change their life and pursue dreams. Should we talk to you or someone you know? Share your story here.