LeAnn Rimes put on a show-stopping performance during her appearance on LIVE with Kelly and Ryan on Friday – but it wasn’t just her vocals that stole the show.

The country music singer had fans rushing to compliment her after she rocked up to the studios wearing a dreamy co-ord that highlighted her gym-honed physique.

LeAnn looked beautiful in a muted orange two-piece that featured loose pleated pants with a ruffle waistband and a matching cropped top that wrapped around her chest like a bandage and showcased her sculpted abs.

She wore her long blonde hair down in loose curls and kept her makeup fresh with a dewy complexion, rosy cheeks, and a subtle pink lip.

The morning show shared a photo on Instagram which saw LeAnn posing in the middle of co-hosts Kelly Ripa and Ryan Seacrest, who both sported wide grins as they wrapped their arms around their musical guest.

Fans were quick to react, with one commenting: “Absolutely beautiful!” A second cheekily wrote: “Hello there gorgeous.” 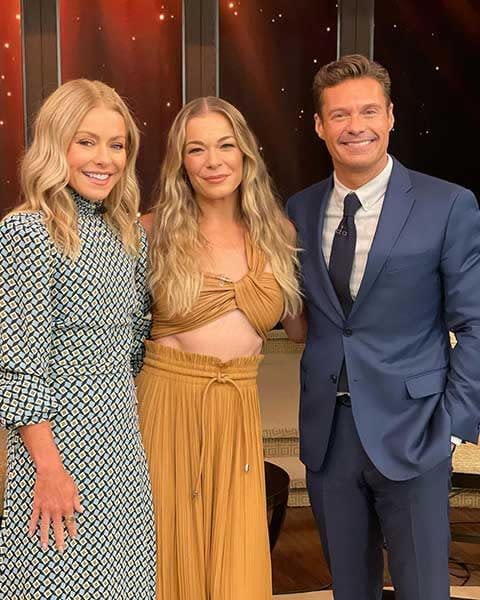 LeAnn looked beautiful for her performance

Others praised LeAnn’s performance, with a third adding: “Adored your performance. I love LeAnn Rimes!” A fourth said: “This was AMAZING! Everything I’ve heard from this album is so different! Her voice is a perfect ten.”

LeAnn performed Awakening from her new record, God’s Work, a song she recently revealed is one of her most cherished on the album.

“Awakening has been one of my favorite moments on God’s Work from the moment we wrote it. and to see so many of you connecting with it in the way you have has made my heart SO full,” she previously captioned a clip of her singing a snippet of the song.

The Can’t Fight the Moonlight singer recently opened up about her career, telling CBS Mornings: “The one thing about me is I have a lot of grit. And I have a lot of resilience. If I wasn’t resilient, I wouldn’t be here.

“I mean, there’s been many times in my life that I could’ve easily chosen a different way out or just not come back from where I was. But I have such a fight. That rebellion that has gotten me into trouble many times has also saved my life.”