Both Melania Trump, 50, and Ivanka Trump, 38, are well known for their expensive wardrobes and for making headlines with their latest outfits. The First Lady, who is a former model, is regularly spotted in designer dresses and accessories with hefty price tags, and President Donald Trump’s daughter, Ivanka is always dressed to impress. However, for their latest appearances ahead of the Republican National Convention, both women have caused a stir on social media as they failed to wear an important item.

Both Melania and Ivanka have been out and about this week as they separately support local causes as well as President Trump’s campaign.

Melania stepped out to visit an exhibit of art to honour the 100th anniversary of the 19th amendment.

The First Lady hosted the launch in front of the White House on Pennsylvania Avenue.

She was pictured alongside the young artists who had helped to create the exhibit, and was even seen hugging some of the children. 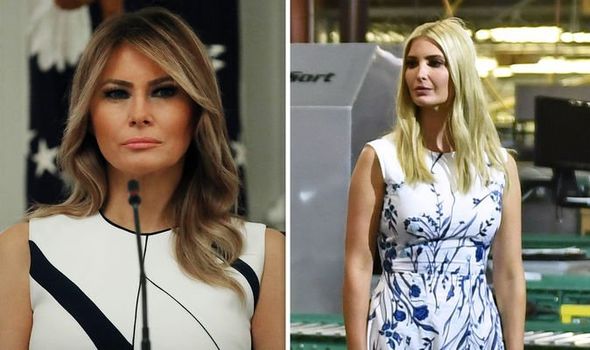 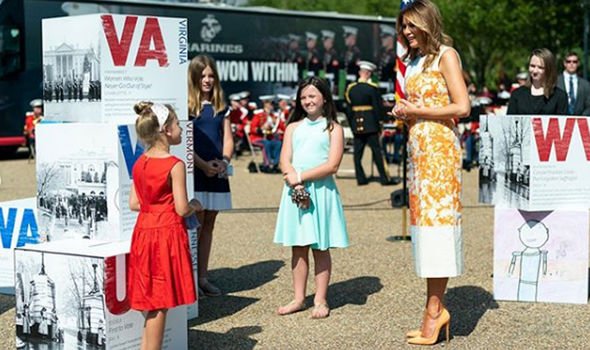 However, Melania’s close contact with the guests sparked concerns on social media, with some slamming the First Lady for not wearing a mask during the pandemic.

As the event was shared on Twitter, users posted their horror at the lack of masks worn by Melania and the children.

“Somebody tell Melania to put on her mask. Is she trying to infect children?” wrote one user.

“We shouldn’t be able to see their smiles because they should all be wearing masks,” said another.

However, it’s reported that an official with the East Wing stated that all children had received a test for the virus before the launch.

Melania was dressed in her usual designer attire for the event, wearing a bright orange floral number by Dries Van Noten.

Dresses by the Belgian fashion designer typically sell for anything from £500 to £1,500.

Melania paired the eye-catching look with matching bright orange So Kate stiletto pumps from Christian Louboutin, which retail for around £525. 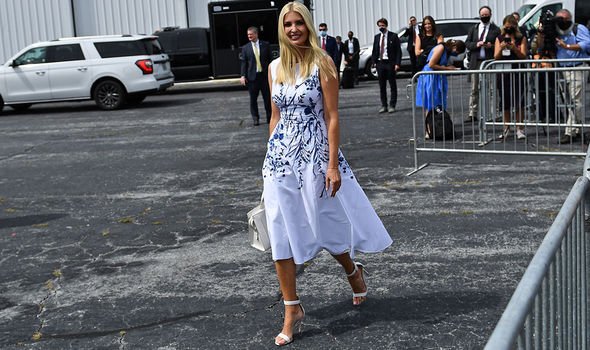 Ivanka also caused a social media storm with her appearance on Monday, as she wore a £1,500 dress yet failed to team it with a protective mask.

The daughter of President Trump has previously been spotted wearing a face covering in public, and even had a chain so she could comfortably wear it around her neck.

However, the Senior Advisor chose not to wear a face mask as she headed to the Charlotte Convention Centre to hear her father speak. 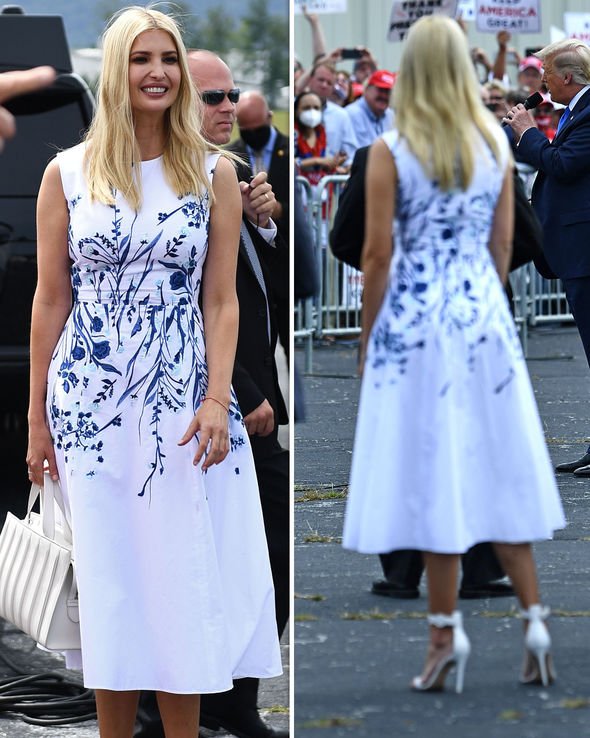 Posting about the outing on Instagram, Ivanka wrote: “Our Farmers to Families Food Box Program has fed more than 100 Million meals to people since its launch just weeks ago in response to COVID-19.

“Today, the President committed $1 Billion more to this historic program — a big win for the American people.”

But social media users were critical of the outfit as Ivanka visited the food production plant in North Carolina with her father.

“Your attire is completely inappropriate for the setting,” remarked one Twitter user, as others commented to ask where her mask was.

“You’re standing in a dress that cost just under $2000 talking about handing out food boxes. ‘Let them eat cake’,” wrote another.