Former model Melania Trump, 50, showed off her impressive wardrobe again on Tuesday as she appeared at the special anniversary signing ceremony with her husband President Donald Trump. The First Lady is well known for her taste in high-end designer fashion and updated a recycled outfit for the event. Melania wore a designer white suit to mark the occasion, with a special meaning behind it.

Melania went for a more classic look for the event, which marks 100 years since the ratification of the 19th Amendment, which granted women the right to vote.

The slim fitting suit retails for around £1700 ($2,195) and features a modern blazer with an asymmetric hem.

The sleek jacket was paired with a white knee-length pencil skirt, but Melania also accessorised the look to give it an update. 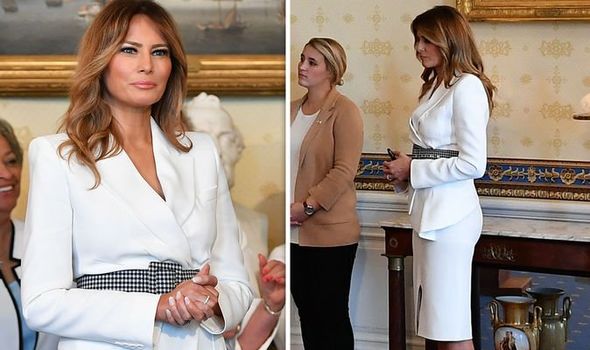 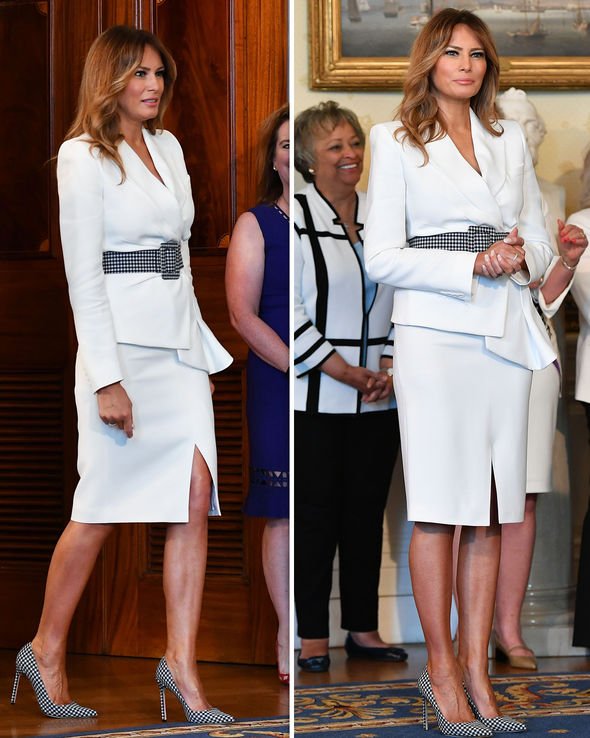 Melania teamed the designer suit with a black and white gingham belt with an oversized buckle that cinched it in at the waist.

The chic belt matched her gingham stiletto shoes, which were the classic Manolo Blahnik BB pump silhouette – a favourite of the fashionable First Lady.

Melania had previously worn the white outfit without the added gingham accessories to greet the French President Emmanuel Macron and his wife, Brigitte, when they visited the White House back in 2018.

However, there was a special meaning behind Melania’s choice of outfit for the event.

Melania chose to dress all in white for the occasion, joining some of the other guests in a special nod to the suffragette movement.

White is historically the colour associated with the women’s suffrage movement.

But aside from the gingham extras, Melania kept the rest of her look simple, with her trademark highlighted hair blow-dried into soft tousles, while for her makeup she kept to her signature smokey eye.

The caption read: “100 years ago today, the #19thAmendment was ratified, securing the right to vote for American women. 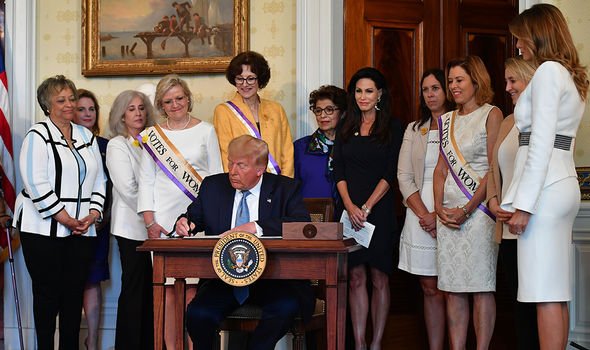 “Today, @POTUS signed a proclamation recognizing this historic anniversary & we celebrate the countless contributions of women throughout our Nation’s history.”

One wrote: “Best dressed FLOTUS,” with others drawing comparisons with Jackie O.

Melania showed off another expensive outfit last weekend when she first returned to the White House after a weekend away. 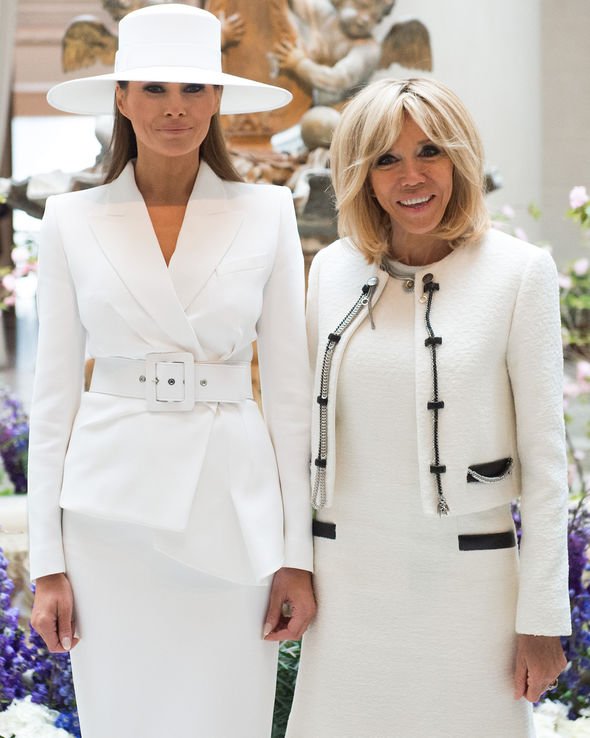 She stepped off the plane wearing a camel-coloured shirt dress by British designer Stella McCartney.

The dress is no longer on sale but was thought to be worth over £500, though it wasn’t the most expensive part of her outfit.

Melania also carried one of her exclusive Birkin handbags, which can cost from £14,000 a piece.

The First Lady made headlines for appearing to shun her husband’s hand as she walked down the steps, clutching her bag to her body – though it may also have been a bid to keep her full skirted dress from blowing in the wind.

Related posts:
TV and Movies
'Grey's Anatomy': Camilla Luddington Thanks Fans For the 'Jo Love' on Her Character's Anniversary
Gogglebox's Jenny Newby shares hilarious wardrobe blunder as she turns up to film 'dressed as the caravan's curtains'
The Morning Watch: The Art of 'GoodFellas' Copa Shot, 'Hamilton' Cast Gets Out the Vote & More
Coronation Street's Ryan Russell on the importance of Michael Bailey
Recent Posts
This website uses cookies to improve your user experience and to provide you with advertisements that are relevant to your interests. By continuing to browse the site you are agreeing to our use of cookies.Ok