Luis Solis and Hailey Terrell, each divorced and wary of new love, had a change of heart about marriage while in quarantine together. 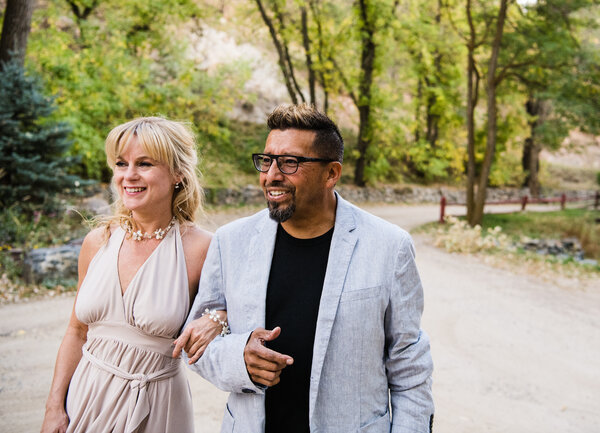 By the time Luis Solis met Hailey Nicole Terrell last December, he had been divorced for 10 years and had become a master of the short-term relationship.

Mr. Solis, 62, said he developed several “relationship management policies,” for keeping the people he was dating at a comfortable distance. He avoided the word “girlfriend” and instead used terms like “close friend,” “dear friend,” “fun friend” or “sporty friend.” He didn’t allow anyone to keep clothes at his place.

“I lived in the moonshot realm in my business and social career, in terms of friends, networks and doing fun stuff,” Mr. Solis said. “When it came to relationships, I limited that to hitting a bunt. I was terrified of getting hurt.” 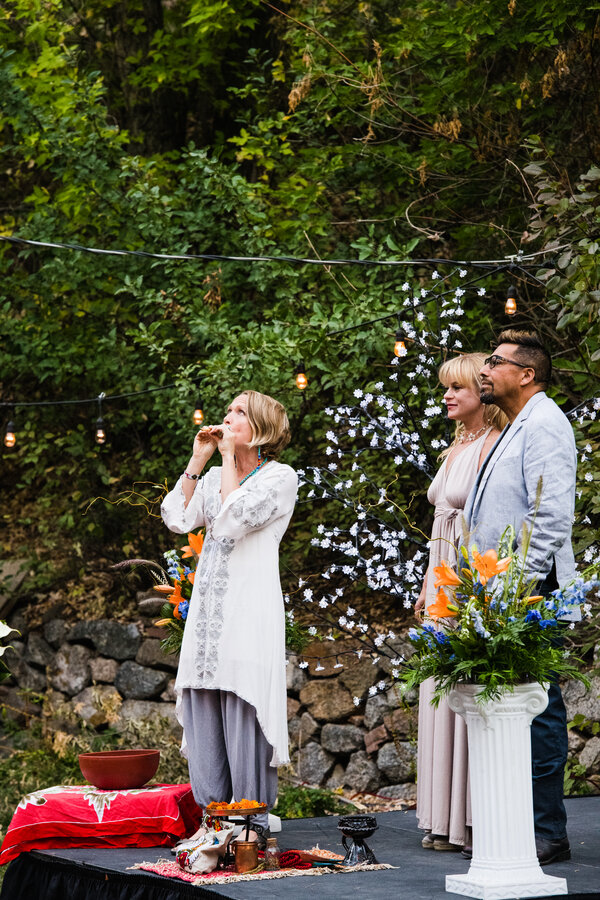 Mr. Solis, who lives in Boulder, Colo., traveled often as a business consultant to corporate executives. He describes himself as “a sherpa to leaders going beyond the ordinary” and is more likely to invite you to a sweat lodge than a golf game. He is the son of immigrants from Guatemala, grew up in Washington and graduated from the University of Pennsylvania. He receive an M.B.A. and a law degree from Stanford. “He’s the American dream times 10,” said Sebastian Mattias Solis, one of his two sons from his previous marriage.

He met Ms. Terrell, 43, at a New Year’s Eve party at the Shine Restaurant and Potion Bar in Boulder. Like him, she had been divorced for 10 years and was wary of love. She said the men she had recently dated “all found ways to break my heart.” Ms. Terrell, who grew up in Norman, Okla., and graduated from Southern Methodist University, doesn’t shy away from big changes in her life or career. After her divorce, she got a job selling art on cruise ships.

“When I’m in pain the answer is usually travel,” she said. And this summer she opened Get Outta Hair, an electrolysis salon in Boulder.

Hours after they met, Mr. Solis invited her to a concert in Aspen, Colo. “On one level I was like, ‘I just met you,’” said Ms. Terrell, who doesn’t have children. “On the other hand, I’ve always wanted to be that kind of girl, ‘Oh, I’m going to Aspen for the weekend.’ I’d never done that.”

While in Aspen, they “recognized a likeness in each other,” Ms. Terrell said. Both are a combination of entrepreneurial and soulful, thoughtful and constantly busy. Ms. Terrell had a stroke when she was 35, followed by a difficult recovery, and is now determined to make up for lost time. “She packs more things into one day than humanly possible,” said Pamela Jackson, her mother.

Both love to dance, without inhibition. “I was absolutely stunned by our connection,” Mr. Solis said. “Call her a unicorn, an exception, different, call her unique, call her quirky, she is my kind of outlier.”

[Sign up for Love Letter and always get the latest in Modern Love, weddings, and relationships in the news by email.]

In January and February, each traveled a lot — he for work and music festivals (he estimates he attends about 18 a year) and she for electrolysis training in California. They talked often on the phone for hours. “Luis is not the kind of guy who answers questions in one sentence,” she said.

By early March, both were back in Boulder and they went to dinner. “I’m thinking we are going to be planning our lives together and he was like, ‘I don’t see this relationship continuing,’” she said. “He basically pulled back the reins, a lot. He said, ‘We’ll still hang out. I just see us as being dear friends.’ I was like, ‘I don’t want to be your ‘dear friend!’”

She and Mr. Solis still stayed in touch and when her stove and refrigerator suddenly broke down in late March, she called him for help. By then, stay-at-home orders had been instituted in Boulder, because of the coronavirus pandemic, and all of his consulting jobs had been canceled or postponed.

He invited her over. “It took eight weeks to replace those appliances,” Mr. Solis said. “So we just hung out at my house watching every possible thing on Netflix and doing a lot of cooking. It created an incredible foundation.” In retrospect, both think the combination of Covid-19 and broken appliances were the universe’s way of making sure they got back together. (Mr. Solis’s cooking also helped; he calls himself a “paella wizard” and “a stir fry maniac.”)

While Mr. Solis initially feared she might get on his nerves, she instead calmed his nerves. “Her outlook of choosing to live fully in the face of massive uncertainty and disruption, that was incredibly seductive to me,” he said. “I do believe that’s one major secret to happiness: Just stop worrying. Hailey is exceptional at that.”

She loved his interesting questions and creative ideas for indoor activities. “There was one point where he put together a 100-word statement and said, ‘This is who I am, can you describe yourself in 100 words?’” she said. “He challenges me more than anyone else ever has.”

Over time, he stopped wishing he could fly off for one of his intense brainstorming sessions with a group of business people. “I had a major shift,” he said. “Now, I want to sit still and do nothing and just hold her hand.” He also loves seeing her clothes next to his in his closet.

In late July, he proposed with an amber ring. “Amber is very, very important to the Mayan people,” said Mr. Solis, who practices some Maya rituals like burning copal (for clarity) and drinking cocoa with friends (for deeper connection).

“He’s an entrepreneur and well-educated and charismatic,” Ms. Terrell said. “He’s not that guy you’re embarrassed to bring to a party. I’m so proud he’s by my side.”

Many people asked if they were rushing into marriage. This was Mr. Solis’s response: “We think there’s normal time and there’s Covid time. Covid is different time. We call it the convection oven of romanticism. Covid is 24/7 with someone in existential crisis mode where we’re sort of wondering, ‘Am I going to live?’ Every month feels like a year.”

On Sept. 26, the couple were married at the Boulder Adventure Lodge, a woodsy, thoughtfully updated hotel with a sign inside that sums up the feeling of the place (and the couple): “Be Dareful Out There.”

The ceremony happened outside. It was part Mayan to celebrate the groom’s heritage, part Christian to celebrate the bride’s, and part fun rituals the couple just made up. It was officiated by Jordan Terrell, the bride’s brother and a former nondenominational pastor at Flatirons Community Church in Lafayette, Colo., with Rea Beaubien, who calls herself a “medicine person,” taking part.

Ms. Beaubien began the ceremony by burning sage to purify the space and fanning the smoke around with macaw feathers. The couple closed their eyes and appeared to enjoy the scent as if it were sunshine.

At another point, several of the 25 guests walked up to the makeshift altar and, one by one, presented the bride and groom with a small meaningful gift and a single word describing love.

Gustav Solis, the groom’s younger son, offered a pair of sunglasses he had worn to a music festival he and his father attended together. “My word is ‘dance,’” he said.

The bride’s father, David Terrell, gave the couple a golf ball. “Luis played golf with us yesterday,” he said. “Not bad. He could use some practice. My word is ‘fulfill.’”

Jordan Terrell led the couple through their vows, while Ms. Beaubien symbolically united the couple by draping a red cord around them, extra loosely. That was apt for Ms. Terrell and Mr. Solis, who can easily spend 24/7 together yet also value their independence.

“Now, is this perfection going to last forever?” Mr. Solis said a few days before the wedding. “I don’t know, but it’s the right place to begin.”

The Love Train Weeks before the wedding, the couple took a trip they dubbed the Love Train, to introduce each other to family and friends. They rented a Tesla and drove from Boulder to Edmond, Okla., to visit her father, David Terrell, and Keller, Texas, to see her mother, Ms. Jackson. They flew to Wilmington, Del., for lots of catching up and reminiscing with his brothers, Rene and Oscar Solis. “Isn’t that what we discovered with Covid?” the groom said. “It’s all about connection.”

The Vows The bride and groom each wrote a set of promises, and both vowed to accept the other “as you are and as you are not.”

The Dinner After the ceremony, guests lined up for Mexican food served out of a bright pink food truck.

The Dogs The bride’s dog, Camden, a 5-year-old Biewer terrier, and the groom’s, Bella, a 13-year-old Tibetan spaniel, were in attendance. Every morning, the couple and their dogs take a quiet walk together. “Nature does the speaking,” Mr. Solis said.

The Honeymoon A surprise from him to her. He merely told her to pack a bathing suit. She only learned where they were headed once they were en route to Ensenada, Mexico.