Nearly 23-years after her death, images of Princess Diana are prevalent—even the TikTok set can reference her looks. The masses continue to be captivated by her life and the ensembles she wore throughout it, from her intarsia sweaters during her first years as a royal to her glow-up after divorcing Prince Charles. It is the latter that has gotten the most attention historically. But thanks to teaser photos from The Crown’s upcoming fourth season, her style in the ’80s is the current runaway hit.

Rowing Blazers is taking note of this particular resurgence. Today, the label beloved by prepsters is releasing a collection that pays tribute to the Princess of Wales’s style during the decade of excess, re-creating some of her best hits. On offer will be wide-leg twill trousers, Sherpa fleeces in jockey patterns, biker shorts, double-breasted tweed blazers, and the brand’s signature rugby shirts.

The real highlights of the collection, however, are the rereleases of two sweaters that are closely linked with Princess Di’s style in the ’80s: the “sheep sweater” by Warm & Wonderful, and the “I’m a Luxury” jumper by Gyles & George. 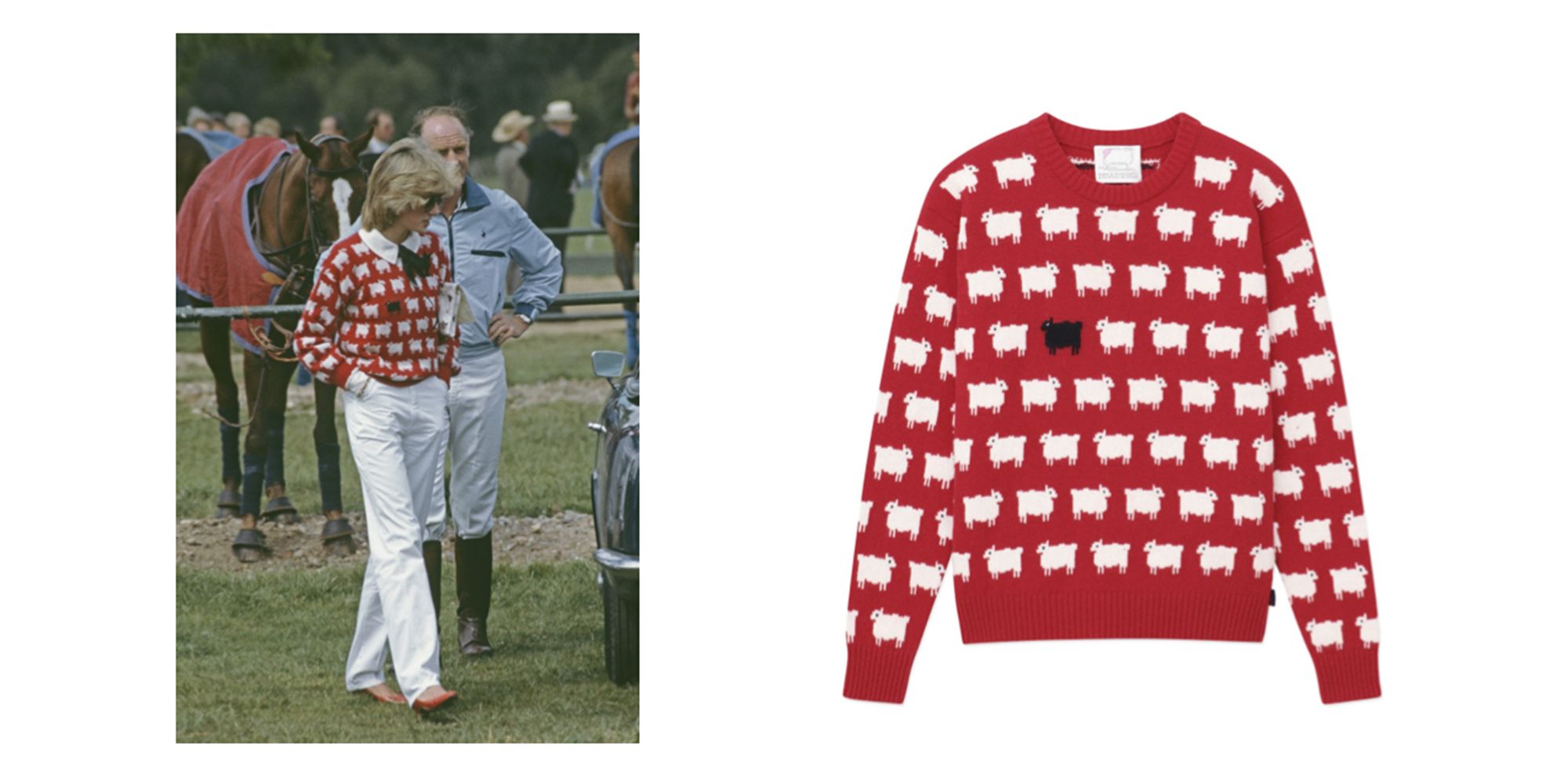 “Princess Diana is enduringly fascinating,” Joanna Osborne, the co-designer of Warm & Wonderful, tells BAZAAR.com. “She still feels very contemporary, and people’s interest in her and her family is as strong as ever. She was accessible and vulnerable, and was as human as all of us in her fashion choices. Even after so many years, she is still exerting a strong influence on fashion with her own stylish combination of independence, kindness, and glamour.”

In the 1980s, Osborne and her partner, Sally Muir, were astounded when their design was worn by Princess Di to a number of events, making headlines along the way. “We had no idea she owned our sheep jumper, and only discovered it when her photo was on the front page of all the Sunday newspapers,” Osborne adds.

Gyles Brandreth, of Gyles & George, had a similar reaction when he saw Diana in his “I’m a Luxury” sweater. “I was over the moon, delighted, excited, and not entirely surprised,” he says. “Having met her, I knew she was somebody who had fun and liked to laugh. I think she appreciated the wit of the jumpers; the colors, the look, the style.” 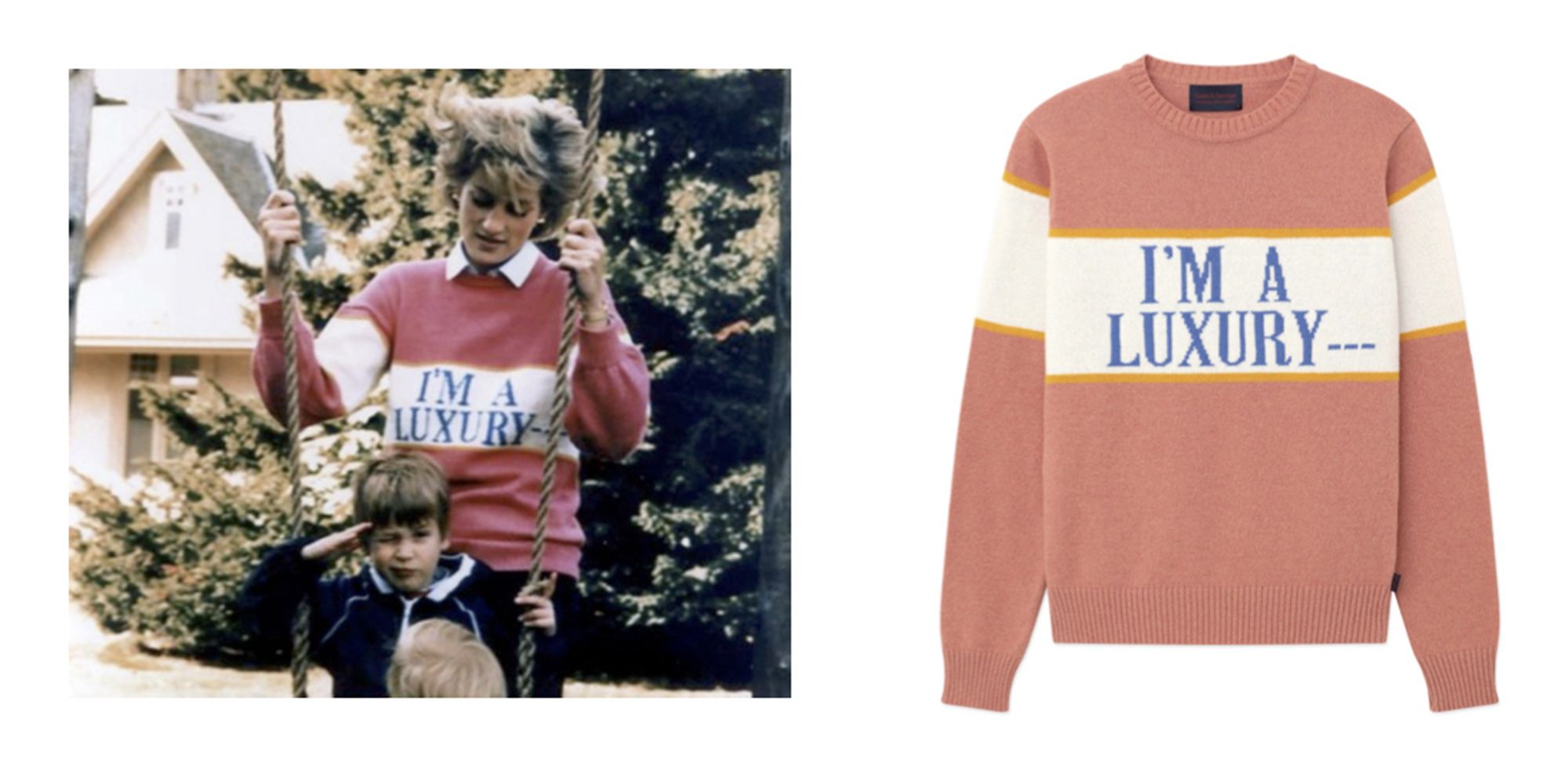 Though Princess Di’s style evolved in the ’90s, when she gravitated toward minimalist looks that were on trend at the time, her love of vibrant hues, quirk, and kitschy sweaters prevailed.

“What I think is most exciting, from my point of view, is the style of hers that I liked best,” says Brandreth. “It was the smart-casual, the informal look of Diana. Not so much the puff sleeves, but when she wore jumpers like ours. She liked the colors. She liked the clear lines. She liked the humor of them. That’s what I appreciated most when I met her. She told me, ‘Oh, the jumpers make me smile.’ And the memory of Diana makes me smile.”