Taraji P. Henson kicked off her AMAs hosting gig in a sparkling silver mini dress on November 22! She paired her red carpet ensemble with a beaded headpiece and silver jewels. See Taraji’s first look and all of her hosting outfits!

Taraji P. Henson turned the American Music Awards into her very own fashion show on Sunday night! The Golden Globe-winning actress, 50, who is tonight’s emcee, hit the (virtual) red carpet in a beaded silver dress with sultry side slits. Taraji, who stepped out in open-toe metallic stilettos, accessorized with a beaded head piece and silver jewels. — This marks just one of many looks Taraji has in store for the night. 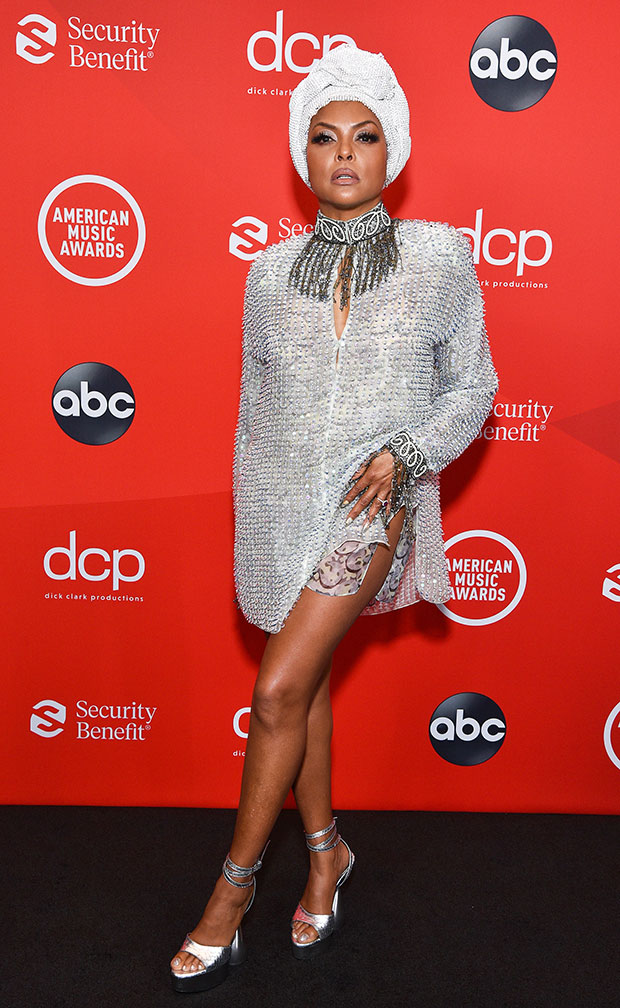 The actress kicked off her hosting gig with an electrifying dance routine to a number of old and new hits. She showed off her dance skills in a white dress and sparkling tights with white sneakers to JAY Z‘s “Dirt Off Your Shoulder,” before she twerked to Megan Thee Stallion‘s “Savage.” Taraji ended her opening performance with Cardi B and Megan’s No. 1 hit, “WAP,” before she put the kibosh on it because she joked, “This is family friendly TV!”

Since there was “no time” for an outfit change, Taraji threw a beige, transparent coat over her matching bedazzled jumpsuit. “I am so happy to be here,” she began, while out of breath from busting a move (or 20). “I’m just happy to be off the couch and in some real fashion,” Taraji admitted in reference to the COVID-19 pandemic. But, she promised that “being at home with Taraji” is going to a “party!”

“It’s time to remember that we are one country y’all and we need to love on each other more. We’re going to have fun, embracing our neighbors and coming together through music,” she said, later adding, “Me and [Jennifer Lopez] are making 50 the new 20!” And, we conquer!

For Taraji’s second look, the What Women Want actress sizzled in another sparkling number. This time, she donned a ruched, halter dress that was a stunning shade of blue.

This year’s AMAs is being live broadcast on ABC from the Microsoft Theater in Los Angeles. JLo, The Weeknd, Billie Eilish, Justin Bieber and more top artists will take the stage for anticipated performances. While the AMAs will certainly look different this time around, Taraji is focused on uplifting the mood after a challenging year.

“The AMAs bring together the music community to celebrate what really drives all artists – the fans,” the Hidden Figures actress said in a press release. “I’m proud to take the stage as this year’s host – and also a fan – for what promises to be an electrifying night of music.”

Tonight’s show marks Taraji’s first public appearance since she confirmed her split from fiancé Kelvin Hayden on the October 19 episode of The Breakfast Club. While discussing the ways women deal with “trauma-filled men,” Taraji said that the longtime relationship just “didn’t work.”

The Super Bowl XLI champion proposed to Taraji on Mother’s Day in May 2018. The actress and former NFL player were initially scheduled to tie the knot in April, however, she decided to delay the nuptials over potential inclement weather.