A utilitarian jacket designed for 19th-century laborers, the chore coat has become a new uniform for multitaskers. 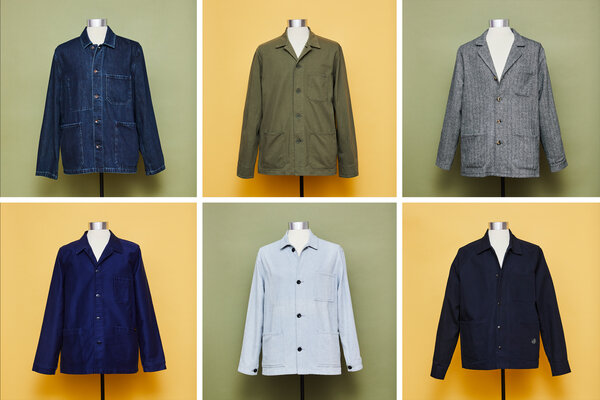 Does anyone truly need a chore coat in a world where thought workers tend to dress like adult babies and manual laborers often resemble the cast of “Magic Mike”? The answer is probably not.

Yet over the last two years, and particularly since the onset of the pandemic, this blocky all-purpose jacket has become a default cover-up for the legions of us now obligated to work from home.

I have my reasons. The chore coat’s shape is sufficiently forgiving to suit bodies of all sorts, including one that has not been to a gym in six months. It layers well and has a simply tailored structure. It is available at every point along the price scale. It has abundant pockets in which to misplace your phone.

There is something else. Plenty of folk, we are informed, are happy to labor where they sleep (and, of course, to have work at all). It follows that a percentage of those people are content to approach each new day in sweatshirts or pajamas or whatever Jeffrey Toobin was wearing on his upper half. I cannot fault them for luxuriating in the comfort of shapeless garments that make few demands of one’s waistline, posture, assertion of status in the corporate pecking order.

It happens, though, that I enjoy getting dressed and all that goes with it. Even though I am essentially headed nowhere, I cannot set off without having first performed the daily rituals of grooming. Showering and shaving (and moisturizing and spritzing) for me are threshold acts. I use them as points of departure. Goodbye, bedroom; hello, desk 52 feet away.

Now I have begun my workday. At some point, I will end it with a glass of wine.

While at work I want to wear what I think of as real clothes. In the days when we all went to the office, that was usually an L.B.M. 1911 blazer over a button-down Oxford and jeans. Now, donning a blazer to sit in a chair wearing headphones for daily video stand-ups would leave me feeling as though I had entered some “realness’’ category at a vogueing ball. All the same, I want to put on something I can later remove to signal quitting time.

The chore jacket is that garment. “It’s been percolating for a while, but suddenly it’s become the ‘It’ thing,” said Todd Snyder, who happens to make one of the more covetable models around, in washed Japanese denim with brass shank buttons. “We’re generally going back to kind of minimalist, simple-is-better, utilitarian clothes.”

Men’s wear retailers, those beleaguered professionals, tend to look upon the chore coat as a form of salvation, something to sell to guys who may never again put on a suit. “It’s a chameleon garment,” said Bruce Pask, the men’s fashion director for Bergdorf Goodman and Neiman Marcus. “You can wear if over a T-shirt, over a turtleneck or with a coat and tie.”

Like Goldilocks, I choose the middle path. Each morning I still slip on a button-down and some jeans (while remaining shoeless, because, why not?) along with my chore jacket, generally alternating between a denim one from Quaker Marine Supply Co. and a moleskin model from Le Mont St Michel. And, if sometimes in doing so, I feel as if I am impersonating Henry Higgins, though without the meerschaum, I can live with that.

It almost goes without mentioning that an item as seemingly blameless as a chore coat would attract haters. Take the blogger who recently railed against it as a useless fad. Terming the chore jacket a default in the “yupster Fall 2020 look-book,” this writer then went on to detail the elements — Converse high-tops, jeans with the cuffs rolled, Carhartt beanie and a base-layer Uniqlo T-shirt — of the typical wearer, a stereotype that struck me, as I read it, as having grown whiskers longer than those of a beard farmer in Billyburg.

Never mind all that. I intend to stick with this sack-like garment, one with origins among 19th-century laborers in England (workers using steam-powered “donkey engines” to excavate the Manchester Ship Canal were fitted out in durable “donkey” jackets) and street sweepers in France.

For the greater part of his work life, my old colleague Bill Cunningham wore blue chore jackets exclusively. Bill bought his on the cheap at La Samaritaine, the working-class Paris department store, and would likely have sniffed at mine as too fancy. For all Bill’s ostentatious humility, though, he retained a lifelong appreciation of what he called “good goods.” Somehow, I feel confident he would have given my chore coat the nod.