On February 2nd, Mat Fraser, five-time CrossFit Games champion and the CrossFit’s “Fittest Man in History” retired from competing. Considered to be the Greatest of All Time (the GOAT, to most), Fraser’s departure from the sport has left a sizeable power vacuum for other CrossFit athletes, such as Noah Ohlsen, Chandler Smith and Justin Medeiros, to secure their position at the very top of CrossFit’s global leaderboard.

Needless to say, it’s a tall order. And one that requires years of relentless pursuit. Unlike other athletes in a similar position, Fraser deliberately kept himself out of the public eye as much as he could, summarizing his tenacity to stay at the top with a simple motto: Hard Work Pays Off.

Often abbreviated to #HWPO, Fraser’s motto quickly became CrossFit shorthand for forging a bulletproof mindset through vigorous training—an essential tool when you’re staring down the barrel of a WOD. Despite this, and with five consecutive wins from 2016 to 2020–a result of training seasons that take up the majority of his year–his methods remain largely under the radar. Fraser would only lift the veil for a certain sect of media titles and CrossFit YouTube channels.

That, however, doesn’t mean you can’t pinch a few of his secrets and apply them to your own workouts. Here, we’ve pooled together our resources to bring you a guide to lifting, sweating and recovering like CrossFit’s GOAT. When it gets hard, remember this—#HWPO. Let’s go.

“This is one of the hardest workouts I’ve ever done”

If ever you needed a reminder that a two-move workout can be devilishly effective, let this be it. “To date, this is one of the hardest workouts I’ve ever done,” Mat Fraser wrote on Instagram in November 2020. “I did the workout early in the season, so I’m sure that contributed to why it was such a tough test. The goal on the assault bike is to use a majority of the minute and hold steady wattage across all the rounds (I think I was around 650-700 watts). The goal on the GHD is to just stay consistent and practice catching your breath while still working on the movement.”

The workout uses an every minute on the minute (EMOM) format, switching back and forth between a 24-calorie sprint on the assault bike and 18 GHD sit-ups. EMOMs, as Fraser explained to Men’s Health UK, form a huge part of his training: “I do a tonne of 40-minute EMOMs. It’s a huge part of [my] training, I do them once, if not twice, a week. They are gruelling. When I’m tight on time, I’ll do the first four stations — the first four minutes — slow, and not at my desired output. I’ll get familiar with the movement, get my body warmed up and then the next 36 minutes, I’m hammering away. The big thing it’s that it’s a defined ending… I always set up the 40-minute EMOMs and try to aim for 40 seconds of work.”

Let’s take a trip back to the CrossFit Games 2019. Within the competition’s workouts, there were several events that can be replicated (and scaled down to a more appropriate weight) for you to try at home. One such event was Ringer #2—the second half of the ‘Ringer’ event—that saw elite CrossFit athletes, including Mat Fraser, rep out 15 burpees, followed by 15 overhead squats with a 60kg (about 132 pound) barbell, followed by 10 burpees and 10 overhead squats and finishing with five burpees and five overhead squats. Sure, it’s simple in format and will be over relatively quickly, but ensure you scale down the weights to something manageable, such as medium-sized dumbbells. The burpees will redline your heart rate, but you’ll need to gain control of your breathing for the overhead squats. 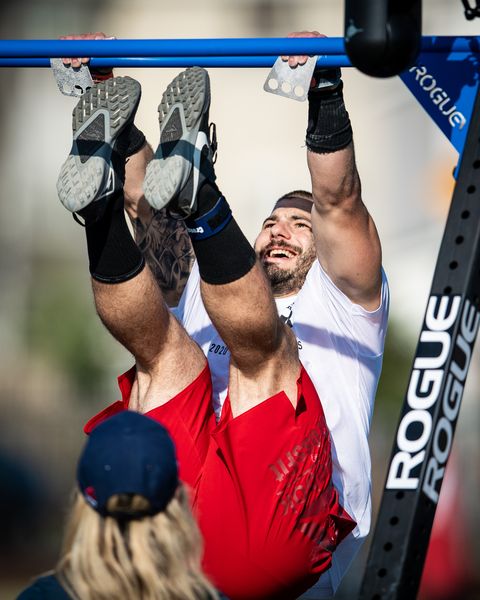 One of the final tests of the CrossFit Open 2018—a worldwide, remote competition that sees the best CrossFit athletes headed to the Games—was 18.5, an ascending seven-minute ladder of two grueling moves: chest-to-bar pullups and thrusters. Your goal is to climb as high as possible within seven minutes. “For me, it’s just finding that good stacked position where your bones and joints are holding the weight, not your muscles,” said Fraser of the workout. “It’s obviously not weightless, but you aren’t straining to hold it up.” Pick a weight—this can be on a barbell, dumbbells or kettlebells—and somewhere you can perform a full chest-too-bar pull-up. Here’s how it works:

Complete as many reps as possible in 7 minutes of

As this is a timed workout, it won’t end until the clocks hits zero. So, add three reps every round. If you complete the round of 18, move to 21 and then to 24. You get the idea. If you don’t have full pullups yet, swap to jumping or assisted pullups.

This workout, won by Mat Fraser in the 2020 CrossFit Games is a trail run, but not as you know it. It’s a three-mile course of undulating and varying terrain with a sinister twist at the ‘finish’ line — to run the event again, in its entirety, in reverse.

Go Against CrossFit’s GOAT With This Head-to-Head Contest

CrossFit YouTuber Craig Richey, a.k.a. TeamRICHEY, took on Mat Fraser in a head-to-head competition (literally) that involved two sets of one exercise—the grueling handstand pushup. Only attempt this one if your shoulders are injury-free and you can rep out enough HSPUs to make it a realistic challenge. If you like the formatting, switch them to kipping HSPUs or standard pushups. Either way, it’s a pumpy one. 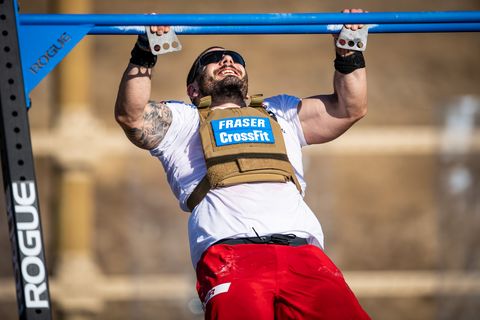 “The final test will be the hardest. Do not miss the finale of the 2020 CrossFit Games. There will be only one heat,” read the daunting caption when the ‘Atalanta’ event was dropped on CrossFit’s Instagram account. You can scale the workout down and still get a feel for what the athletes were grinding through.

“The movements go from the most difficult to the least difficult, but it still finishes with a technical movement in the pull-ups,” explains Men’s Health UK fitness editor Andrew Tracey. “Scale the distance and the reps. Start with an 800m run and, to keep the same format as push, lower-body and pull, scale handstand push-ups to push-ups; single-leg squats to reverse lunges and pull-ups to inverted rows. That way you’ve still got a push movement, a unilateral leg movement and a pull movement. Go 50-100-150 reps, halving the reps. That’s 50 pushups, 100 alternating lunges and 150 inverted rows.”

“The run either side acts as a buy-in and a cash-out, which means you’re going into the workout fatigued and you have a chance to empty the tank at the end. It’s not technical and you’re giving it everything you’ve got to chip the seconds away.”