After sparking marriage speculations by calling the ‘Transformers: Age of Extinction’ actress his ‘wife,’ the son of David Beckham heaps praise on his partner as she shares bare-faced selfies.

AceShowbiz –Brooklyn Beckham is grateful to have Nicola Peltz in his life. The son of David Beckham and Victoria Beckham (Victoria Adams) has gushed over his partner in social media after sparking speculations that the two have exchanged their vows.

On Monday, January 3, the “Transformers: Age of Extinction” actress took to her Instagram account to share a series of makeup-free mirror selfies, showcasing her natural beauty. In the snaps, the 26-year-old star could be seen posing in a baggy black Foo Fighters T-shirt with her blonde locks swept back.

In the comment section of Nicola’s post, Brooklyn, who got engaged to Nicola in 2020, gushed, “I am so lucky.” Not stopping there, the 22-year-old model, who is obviously madly in love with his fiancee, reposted the images on his Instagram Story. Over the pictures, he added a GIF sticker that read, “Uhh so pretty.” 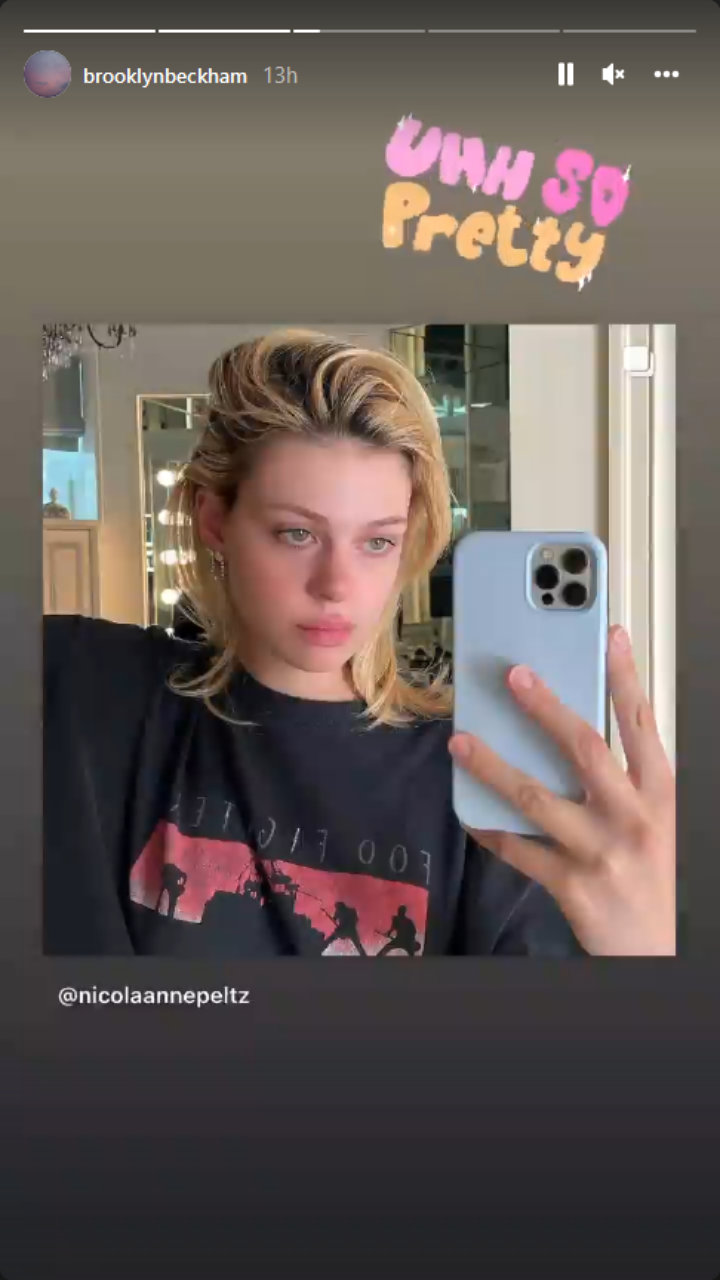 Brooklyn’s sweet social media gestures arrived just days after he sparked speculations that he and Nicola might have tied the knot. On January 1, he posted some photos of him with Nicola, which were taken during what appeared to be a New Year’s Eve party, on his page.

“Here we come 2022 x me and my wife are coming for you xx,” Brooklyn captioned his post which later sent their fans into a frenzy. Nicola then declared her love in the comment section, saying, “LOVE YOU,” adding a bunch of red heart emojis.

Meanwhile, many confused fans were seeking for an answer whether or not the couple is already married. “Married already?” asked one person. Another Instagram user wrote, “Wait, what…. Did you guys get married?”

The post was also soon inundated with congratulatory messages, with many taking the “wife” comment as a confirmation that they had tied the knot. “Awe you got married?? Congrats!!! Such a beautiful couple.” A second added, “Didn’t know you got married congrats.”

Brooklyn’s Instagram post featured a snap of the pair sharing a passionate kiss. The following picture saw Brooklyn planting a kiss on his stunning companion’s cheek. For the event, Brooklyn wore a classic white shirt, black trousers and a matching blazer. In the meantime, Nicola looked amazing as she donned a mini dress that boasted a feather trim on the neckline.

In November, Brooklyn revealed that he had to postpone his wedding due to the COVID-19 outbreak. “We’ve been engaged for a year and if COVID wasn’t a thing we’d have liked to have been married already,” he said at the time.