BBC Breakfast star Carol Kirkwood, 57, responded to a series of comments on Twitter after it was revealed her weather reports had been moved to a different time. Earlier this week, her co-star Louise Minchin, 51, told fans about Carol’s rescheduled times ahead of the show.

Can she please stop calling you Lou? Does my head in

Many Twitter fans flocked to the micro-blogging site to comment on the news, but one viewer took the opportunity to query her use of vocabulary.

The BBC Breakfast viewer wrote: “Can she please stop calling you Lou. Does my head in.”

Louise, Carol and BBC Breakfast all tweeted about the weather star’s time changing on Twitter. 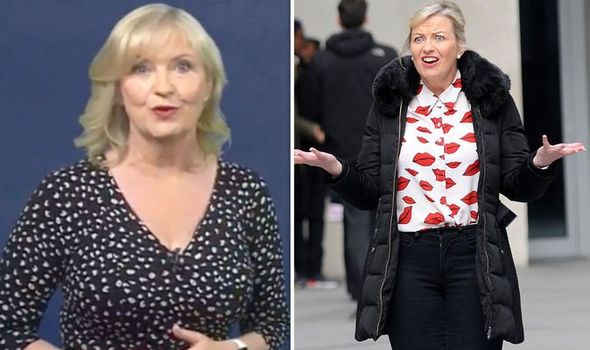 Due to the impact of the coronavirus, Carol will now deliver the latest forecast news at 27 and 57 minutes past the hour.

A statement from the show’s official Twitter page reads: “Times are changing.

“Weather in #BBCBreakfast has temporarily moved to 27 and 57 past the hour due to the impact of Covid19.

“You can still download the BBC weather app for weather whenever you want it.” 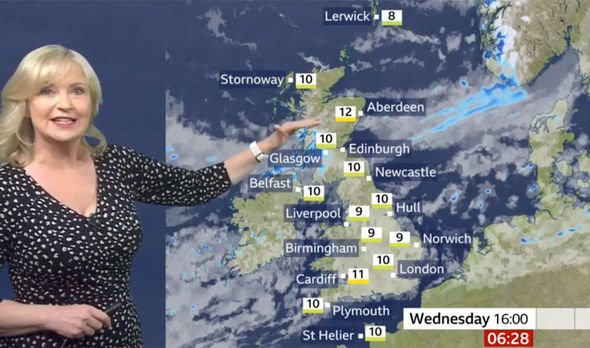 One Twitter user commented: “I really think our local news is more important than the weather!!”

The person in question added: “I realise that, what I meant was we could do without a weather report and still keep the local news which includes a weather update.”

“Schedules have been changed because of the impact of Covid19,” the weather reporter replied.

“Which manager thought this was a good idea? #stayathome so I’d say weather is less important!”

Today, the weather star brought some good news to the nation by announcing it could be the “warmest day of the year so far” this Sunday.

She wrote: “At the moment it looks like somewhere in East Anglia/SE England could reach 20C on Sunday.

The news comes in the wake of the coronavirus pandemic, where citizens across the world are currently in lockdown in a bid to combat the disease.

Prime Minister Boris Johnson put a lockdown into place earlier this month as the deadly disease continues to spread in the UK.

He said citizens should only leave their home for four essential reasons such as; shopping, getting medical help, one form of exercise per day and ravelling to work if working from home isn’t possible.