Christina Aguilera is speaking out in support of Britney Spears. The singer is sharing her love for the fellow pop icon in the wake of Spears’ powerful statements during her conservatorship hearing last week.

“These past few days I’ve been thinking about Britney and everything she is going through,” Aguilera wrote in a post she shared to her Instagram story on Monday.

“It is unacceptable that any woman, or human, wanting to be in control of their own destiny might not be allowed to live life as they wish,” she continued. “To be silenced, ignored, bullied or denied support by those ‘close’ to you is the most depleting, devastating and demeaning thing imaginable.”

Aguilera added, “The harmful mental and emotional damage this can take on a human spirit is nothing to be taken lightly. Every woman must have the right to her own body, her own reproductive system, her own privacy, her own space and her own happiness.” 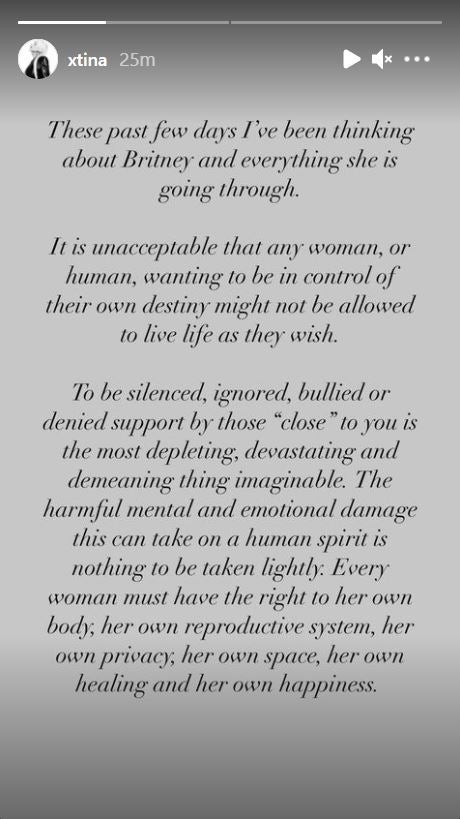 “While I am not behind the closed doors of this very layered & personal yet public conversation — all I can do is share from my heart on what I’ve heard, read and seen in the media,” the singer explained. “The conviction and desperation of this plea for freedom leads me to believe that this person I once knew has been living without compassion or decency from those in control.”

Aguilera explained how Spears has “worked under conditions and pressure unimaginable to most” and truly “deserves all of the freedom possible to live her happiest life.”

“My heart goes out to Britney,” Aguilera concluded. “She deserves all the TRUE love and support in the world.” 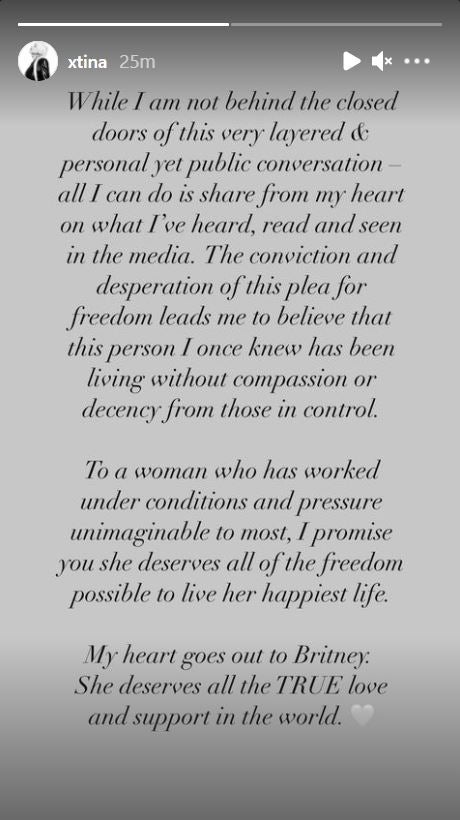 Spears, 39, appeared remotely to address a Los Angeles judge on Wednesday for the latest hearing on her conservatorship. During her testimony, she called out her father, Jamie Spears, and alleged that the conservatorship holds her back from living her life.

The pop star expressed that she would like nothing more than “to end the conservatorship without being evaluated,” as well as regain control of her life and more. Spears also shared a slew of shocking allegations against both her father and her team, including how they allegedly forced her into rehab, made her work when sick, and how she isn’t allowed to get married or have more children.

Following Britney’s claims, Jamie’s attorney said in a statement to the judge, “He is sorry to see his daughter suffering and in so much pain. Mr. Spears loves his daughter and misses her very much.”

Hear more of Britney’s testimony — and read it in full here — in the video below.