DaBaby was shopping on Rodeo Drive when the arrest happened on video. After a search, police confirmed they found a gun in his car.

DaBaby has been arrested. The 29-year-old rapper — née Jonathan Lyndale Kirk — was photographed getting handcuffed by a police offer in Beverly Hills, California on Thursday, Jan. 7 — see the photos and video on TMZ here. DaBaby was out shopping on Rodeo Drive when the arrest happened. He was wearing a gray or white sweatsuit, white Yeezy foam runners and a protective face mask during the arrest.

The Beverly Hills police department confirmed the incident to HollywoodLife via email. “On January 7, 2021, at approximately 4:37pm, Gucci security phoned Police Dispatch in regards to a group of males walking southbound with one male having a handgun in his waistband,” the statement read. “Police made contact with the group after they had entered a vehicle and were preparing to leave the area. An investigation followed and a 9mm firearm was found in the vehicle,” they confirmed. 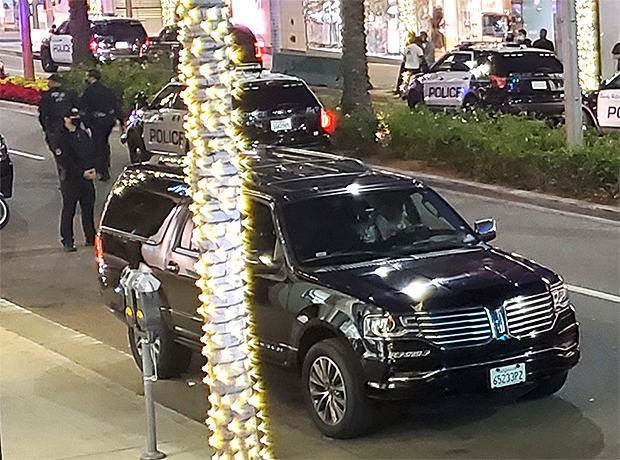 DaBaby and three friends were in their car and about to drive away when police cars pulled up and surrounded their vehicle.The “Suge” rapper and the other three men were detained as police searched their car, where the handgun was found.

In the three minute video, a photographer captured DaBaby in the car as she began asking as question about a new Tory Lanez song. Moments after he rolled up the window, in-uniform Beverly Hills officers approached the large black Chevy Suburban SUV. “Stop the car,” he ordered as other officers approached the opposite site of the vehicle. “Roll down your windows,” a male and female officer both ordered.

After some back and forth, the female officer opened the back car door where DaBaby was seated as the male officer could he heard saying, “They called us over a gun — it’s as simple of that…we’re going to take some safety precautions to make sure we’re safe. We don’t want anything to happen to you guys, either.” DaBaby was then put in hand cuffs as he was walked over to the side walk in front of Bottega Veneta. HollywoodLife has also reached out to DaBaby’s rep for comment.