Royal expert Robert Lacey wrote a column for the Daily Mail that has raised a few eyebrows. The author of “Battle of Brothers: William and Harry – The Inside Story of a Family in Tumult” promoted his book about Prince William and Prince Harry’s feud as the brothers prepare to honor Princess Diana on July 1. But Lacey’s latest reveal shocked royal watchers because of something that William supposedly said about Meghan Markle.

In his Daily Mail column, Lacey revealed more about Prince William and Prince Harry’s group of friends who make up their support system outside the royal family. Lacey claims the brothers shared many of the same close friends. The royal biographer described the group as a “discreet but concerned support system is made up of a blend of schoolmates, playmates, fellow revellers at ‘Club H’ (the brothers’ discotheque in the basement at Highgrove), companions from the Armed forces, royal mentors and aides.”

According to Lacey, William and Harry’s close friends “have despaired about the continued animosity” between the brothers. There is a tiny ray of hope in the feud between the royal brothers because the brothers’ circle of friends did not take sides. The royal biographer said the tight-knit group of friends see both sides of William and Harry’s argument; they understand William’s support of the British monarchy and Harry’s support for his wife. Keep reading to learn what Prince William reportedly said about his sister-in-law Meghan and buckle up because it’s surprising. 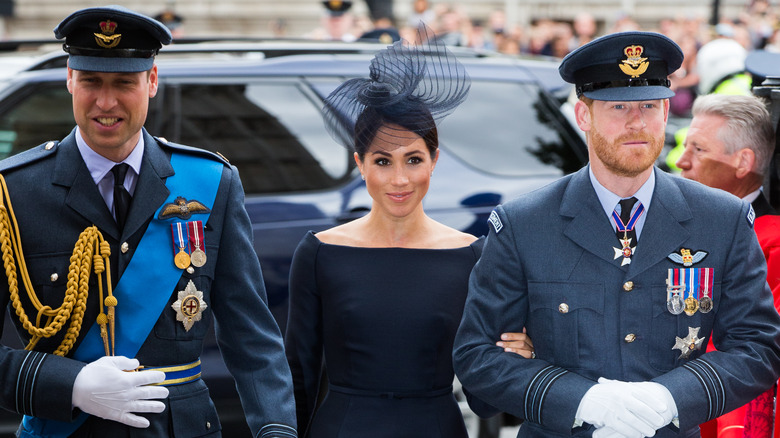 According to Robert Lacey’s column in the Daily Mail, Prince William went off about Meghan Markle when friends told him that many people have a sister-in-law problem. Lacey claims William said, “The way that bloody woman treated my staff was merciless!” William was “enraged” when he learned of bullying allegations from his staff. But William calling Meghan “that bloody woman” is surprising and does not bode well for a reconciliation between the royal brothers.

As Lacey wrote of the close friend group Harry and William share, some revealed, “‘Meghan can be a 500 percent nightmare,’ some close friends of Harry are among the first to admit. ‘The never-ending PR. She’s just so . . . American!'” Lacey also reported that their friends understand why “the bizarre combination of self-promotion and self-pity that characterizes Meghan” upsets William. But Lacey says said friends “are willing to concede the jealousy the Cambridges once felt at being overshadowed by the megawatt younger brother and his wife.”

Lacey claims that Harry and William’s friends have urged the brothers to compromise, and says the younger brother has earned the nickname “Homesick Harry” because he has been calling the UK, upset over the fallout from his remarks about Prince Charles.