Gwen Stefani is a gorgeous bride-to-be!

The 51-year-old singer, who is set to wed Blake Shelton sometime this summer, was showered with love on Thursday, as her family gathered together for an intimate bridal party. Stefani took to Instagram Stories to document the fun celebrations.

“I got kidnapped by family to celebrate that I’m getting married!” she said in a video post, with another reading, “Feeling loved, feeling blessed.” 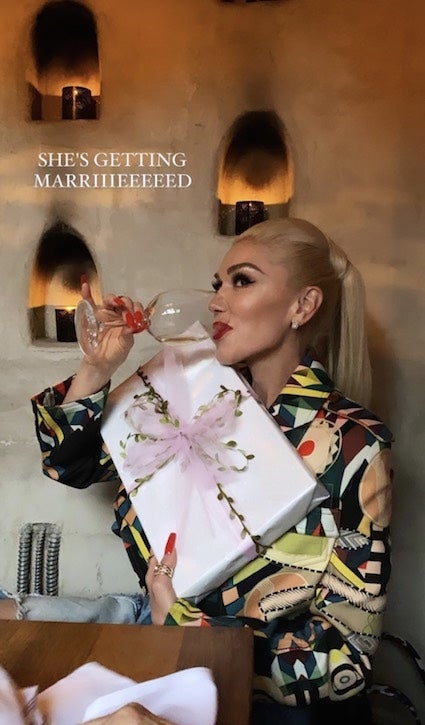 Stefani also shared a card that included “something old” — a copy of “The Mass on the Day of Marriage” of her parents, Patricia and Dennis, who tied the knot on June 11, 1966 in Anaheim, California.

“Wishing you all the happiness your heart can hold… today, tomorrow, always,” the inside of the card read. “We love you so very much!”

Stefani revealed back in April that she and Shelton, 44, plan to keep their nuptials low-key.

“We’re keeping it very simple. Really simple,” Stefani said during her appearance on Late Night With Seth Meyers. “I think the guest list will not have a lot of musicians. It’ll be like my mom and my dad. It’s literally going to be just family. We are looking forward to that, though.”

“It’s going to be fun. We’re going to make it really fun, but it’s not going to be a big [event],” she continued. “It’s not like the queen and king are getting married or something like that.”

Last month, Shelton also revealed the first song he and Stefani plan to dance to as husband and wife.

“It’s ‘If You Leave’ from the Pretty In Pink soundtrack,” Shelton shared on The Tonight Show Show Starring Jimmy Fallon. “We talked about this. We both love the song. We’re both fans of the ’80s, why not? Don’t you think that would be a great one, though? We’ve literally talked about that.”

Shelton also admitted while guest co-hosting NBC News’ Today With Hoda & Jenna in March that he “absolutely” pictures himself living a simpler life with his fiancée someday, out of the spotlight.

“I hope that’s not too far down the road. Ten years sounds like way too long to me,” he said. “I’d like to see that sooner than later. I mean, we’ve both pretty much taken it to the limit as far as our careers go, and touring and now the television thing. It’s been fortunate to accomplish a lot of things, but hopefully at some point we’ll get a chance to live some life. And I think we’re both ready for that, honestly.”

“The older I get, the more I kind of feel like I’m starting to turn into a little bit of a hermit,” he continued. “You know, and just kind of passing on things.”

Hear more on their love story in the video below.