Prince Harry and Prince William are not on great terms—that’s no secret. But, their close friend and British journalist Tom Bradby has insight into where their relationship currently stands. A lot of has happened recently: Harry and Meghan Markle had a tell-all interview with Oprah Winfrey, Prince Philip passed away, and William and Kate Middleton launched a YouTube channel (c’mon that’s a huge deal). However, despite Harry and William chatting at their grandfather’s funeral, they’re still fighting.

“It used to be quite a straightforward thing, right, because they weren’t arguing and life was simple,” Tom told The Times (per The Sun) regarding his relationship with William and Harry. “And then it just slowly descended into something that was difficult personally and publicly—really over the past year and a half.” 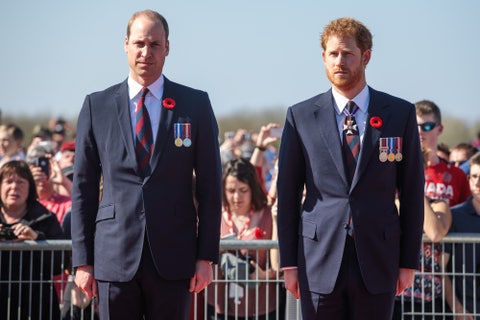 Tom has been close with William and Harry for years. He sat down with William and Kate for their engagement interview and he was the host of a documentary filming the Duke and Duchess of Sussex on their trip to South Africa.

For now, relationships within the royal family remain strained. A source told The Mirror that William and Harry’s relationship is “extremely frosty,” even after seeing each other at the funeral. The insider added, “Truth be told, Harry didn’t really know what to expect before he came home, which is why he reached out before seeing everyone. He wrote a deeply personal note to his dad to try and set things straight, but tensions are still running high and things haven’t exactly ironed out the way he had hoped.”

The source continued, “Harry didn’t expect everything to be completely back to normal but his feeling after seeing his family was there is a lot of ground to make up. Whether that is harder or easier to do on the other side of the world remains to be seen. There is a lot of distrust in the camp and everything is still very, very raw.”

You love royal news. So do we! Let’s overanalyze it together.