Queen Elizabeth lost her spouse of more than 70 years this year when Prince Philip died at the age of 99 on April 9 at Windsor Castle. Afterward, the world kept a close eye on the nonagenarian as she mourned her spouse. When she sat alone at his funeral, social media was ablaze as footage of the tiny, stricken widow was shown. But Queen Elizabeth has kept on a brave face and has soldiered on since his death.

A former senior aide shared some insight with People about why the queen was keeping a stiff upper lip amid her period of mourning. The source revealed, “Her family will step up and be by her side, but she will carry on.” They continued, “She understands that she has a job to do, and [Philip] would have wanted her to crack on.”

During the week of June 28, the queen is scheduled to visit Cumbernauld, Edinburgh, Glasgow, and Stirling in Scotland, per People, while staying at the Palace of Holyroodhouse (her Scotland home). The royals are celebrating “Holyrood,” or “Royal Week in Scotland,” where they acknowledge “Scottish community, innovation, and history,” according to per the palace (via People).

While the queen is paying homage to Scotland this week, other traditional events have been scaled down due to COVID-19 regulations. Luckily, the monarch will enjoy the company of her grandson Prince William while touring the country. 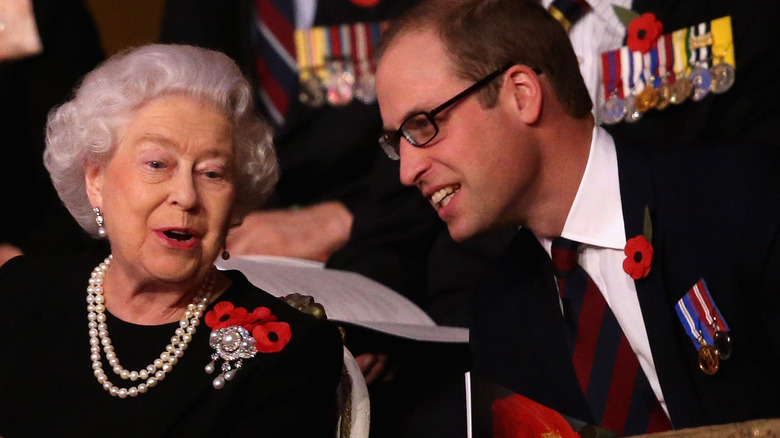 The current and future monarch are spending a little time together during Royal Week. For the first time since Prince Philip’s death, Queen Elizabeth is visiting Scotland to undertake some official duties.

According to the Daily Mail, June 28 kicked off with a trip to a new soda-making factory in Cumbernauld, near Glasgow. After the monarch opened the Irn Bru facility, she and her grandson were treated to a narration of the history of the 140-year-old company. The Duke of Edinburgh even obliged the factory by having a drink of Irn Bru, the country’s traditional drink. Wills remarked, “You can taste the girders in it!” However, the manager refused to share the recipe behind the popular drink. “This is a closely guarded secret,” he said. Grandmother and grandson also entered their John Hancocks into the visitors’ book.

Queen Elizabeth and the Earl of Strathearn, as Prince William is known in Scotland, attended the traditional Ceremony of the Keys at the Palace of the Holyroodhouse. They were welcomed to Edinburgh, where Lord Provost offered the queen the keys to the city.

Princess Anne is slated to accompany her mother on June 30 and July 1, as the monarch continues her royal duties. While it’s heartwarming to see the royal family rallying around the queen, let’s hope Prince William and Prince Harry can also set aside their differences this week at the unveiling of Princess Diana’s statue.