Jim Parsons and Matt Bomer lead an all-star cast in Ryan Murphy’s Netflix film adaptation of the Tony-winning play The Boys in the Band. And the first trailer gives a look at the wild night that awaits them.

Written by playwright Mart Crowley, The Boys in the Band tells the story of a group of gay men in 1968 New York City who gather at a mutual friend’s apartment for a birthday celebration. Over the course of the evening, as the drinks continue to pour, faults in the men’s relationships are exposed and friendships are tested. The party culminates in a nasty parlor game where each of the guests must call someone they loved and tell that person about it.

On stage and in the film, Parsons leads the cast as neurotic host Michael while Bomer portrays his former flame, Donald. Rounding out the ensemble is Quinto as the sharp-tongued Harold; Rannells and Watkins as the unhappy couple, Larry and Hank, respectively; Washington as the conservative Bernard; de Jesus as the flamboyant Emory, Carver as a guileless hustler and Hutchison as an unexpected guest, Alan.

Last year, as the cast prepared to adapt the story for the screen, Parsons was excited about “the chance to do this — this material that we know so well and we worked on so long — to get to do it in a different way.”

The former Big Bang Theory star told ET that by removing the audience they were accustomed to performing in front of night after night would make the experience of acting in the film feel more intimate. “The core story will all stay the same but it will be a different beast by the time we’re done with it,” he added. 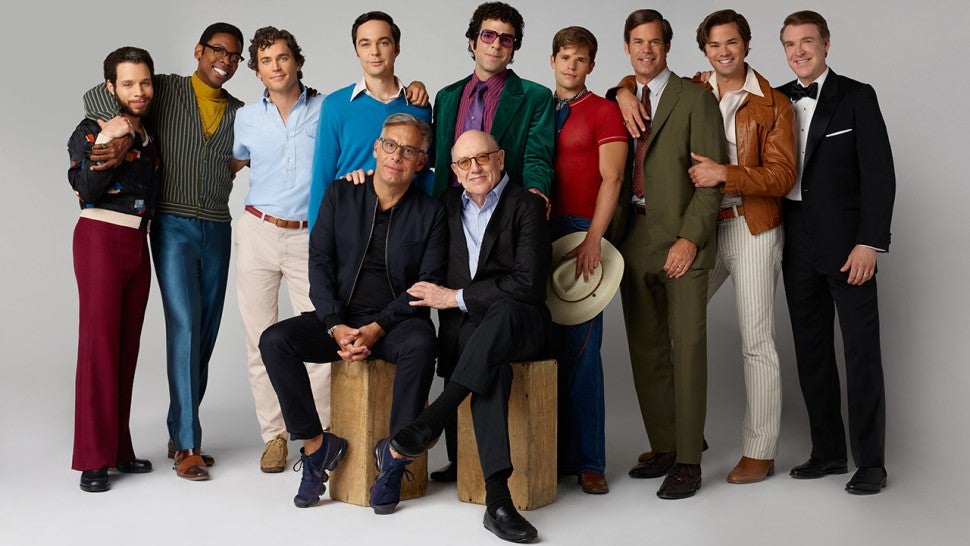 The actor also explained the significance of retelling this story now — and for the revival and subsequent film to star a cast of all openly-gay men. “It’s very meaningful to be able to play these parts as out gay actors 50 years later, when so many of these men not only hid their sexuality but died of AIDS eventually, a disease that undoubtedly was allowed to get as bad as it did in part due to homophobia, a secretiveness and no action being taken,” Parsons said. “It’s not a small deal to have that many out, gay actors all in the same production together.”

The Boys in the Band debuts Sept. 30 on Netflix.