Now, Entertainment Weekly reports that Mitchell, best known for roles in “The Good Fight,” “Shrill” and co-creating the musical “Hedwig and the Angry Inch,” will portray a dramatized version of the enigmatic former Oklahoma zookeeper who is currently in prison on charges related to a failed murder-for-hire plot targeting Baskin. 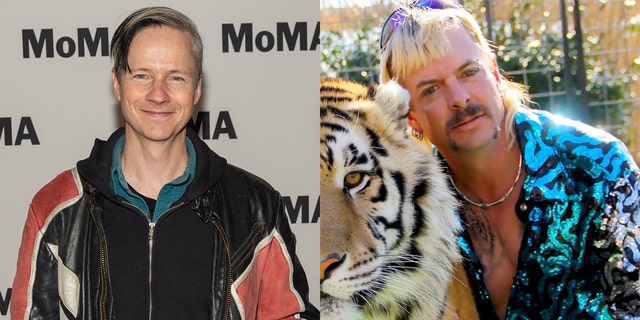 John Cameron Mitchell has been tapped by NBCUniversal to play Joe Exotic in an upcoming series.
(Getty Images/Netflix)

“I’m thrilled to take on the role of this modern folk antihero,” said Mitchell in a statement to the outlet. “Joe and I are the same age, and like him, I grew up queer in Texas, Oklahoma, and Kansas, so I feel like I know a little bit about this guy and his desperate attempt to conquer an inhospitable world.”

According to Variety, Mitchell previously won Tony Awards for his Broadway work including a win for best revival of a musical and a special award for performance. He also directed and starred in the film version of “Hedwig,” for which he earned a Golden Globe nomination for best actor in a musical or comedy. Hisother film directing credits include “Shortbus” and “How to Talk to Girls at Parties.”

“It’s clear that an over-the-top character like Joe needed someone very special,” Steven O’Neill, executive vice president of casting and talent development for series producer UCP, told the outlet. “We are so excited to have John Cameron Mitchell, an adored icon of the LGBTQ community, take on this compelling role. His casting speaks to our ongoing vision of universal storytelling, and we can’t wait for our audiences to experience the show.”

Although “Tiger King” on Netflix made Joe Exotic’s story popular, the series will be based on the “Wondery” podcast “Joe Exotic,” with the show currently operating under the same working title.