Kate Garraway has revealed that husband Derek Draper has started to regain consciousness and has opened his eyes as he emerges from an induced coma.

Derek is reported to have started to regained consciousness and is said to have opened his eyes.

Speaking exclusively to HELLO!, Kate said: “We’re keeping positive and doing everything we can to bring him round. The children and I communicate with him every day on FaceTime, while a nurse holds his iPad.”

She added: “I really believe he can hear. When medical staff say: ‘Good morning, Derek,’ he sometimes opens his eyes. We and the doctors are doing everything we can so that he can start to recover.”

Later in the interview, Kate spoke of how the doctors have urged her to return back to work.

READ MORE
Who is Derek Draper? How long has he been in coma? 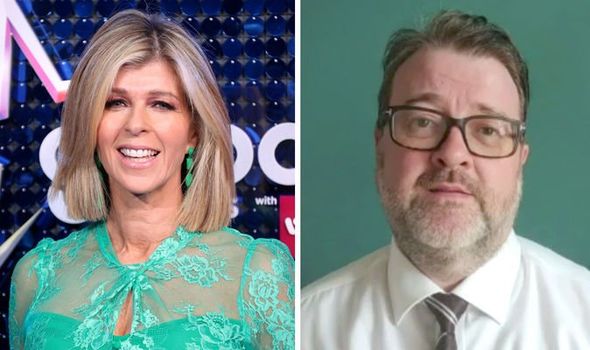 Kate explained: “The doctors have been urging me not to put my life on pause.

“They’ve told me that I need to go back to work and create a routine in our lives again.

“The children and Derek are all I’ve thought about and they’re the most important people in my life, but I must create structure and normality for the children, to clean the bath, put the plates in the dishwasher, and tidy the house.

“I also need to get back to work so that I can provide for the children and we can do things together, to make them feel that the light hasn’t gone out of their lives, that there’s hope for the future.”

Kate went on to say how she has been waiting on the latest news on Derkek’s condition.

Kate added: “I have been living at the end of the phone 24/7, waiting for news of Derek.

“But the doctors have warned that his condition could persist for years so I have to get on with life whilst we are waiting for him to get better. Billy starts secondary school in September, but Derek’s doctors say he won’t be out of hospital by then.

“My priority is to make the children feel safe, not to let them see me feeling vulnerable in the world where Derek was my rock.”

How did Derek catch COVID?

It is knot known how Derek caught the coronavirus but it was reported he was rushed to hospital after testing positive for the virus on Monday, March 30.

At the time a representative for Kate told the MailOnline: “Kate’s husband, Derek Draper, has been taken to hospital and is being treated in intensive care with a confirmed case of COVID-19.

“He was admitted on Monday and has since tested positive for the virus.

“Kate, hasn’t been tested, however she has also been displaying mild symptoms, also since Monday, and as a result has been on strict isolation with her children at home.”