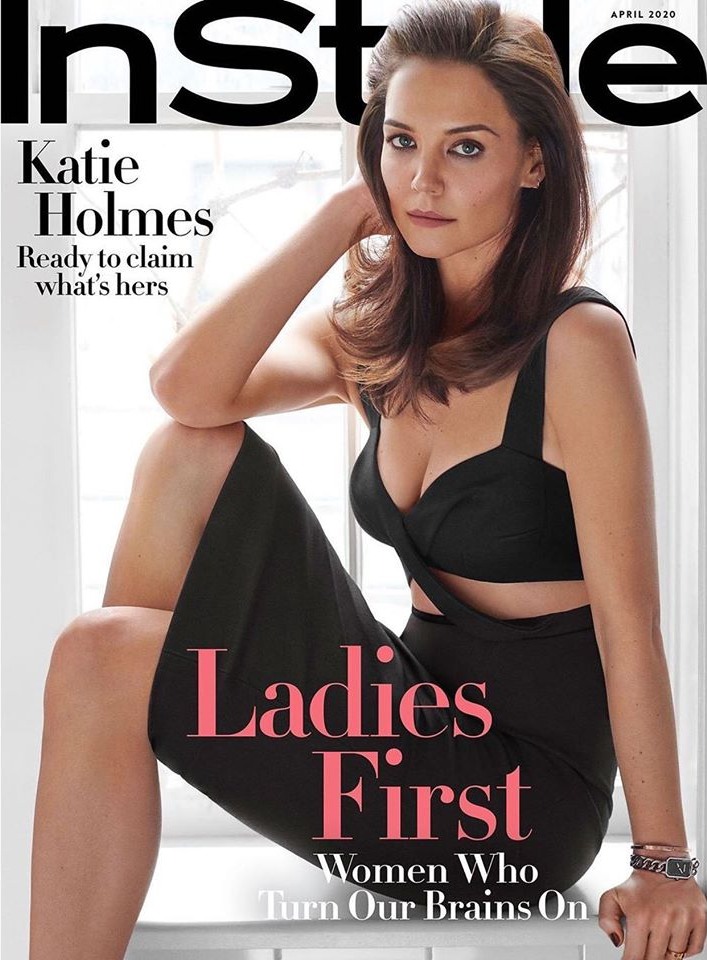 In the post-Tom Cruise era, I’ve read my fair share of Katie Holmes’ interviews, especially in magazines. She doesn’t have the most exciting personality, either that or she’s just very cautious about how she presents herself to print media. She has the willpower to never really take any bait and she refuses to even mention Tom’s name. So, we’ve never gotten that juicy tell-all interview, and we probably never will. Which is fine, I guess. But I’ve always hoped to get to see more of her personality, and here it is – just a better profile/Q&A with InStyle for their April cover. Katie is promoting The Secret: Dare to Dream, and she’s about to direct her second film, Rare Objects. You can read the full InStyle piece here. Some highlights:

She’s enjoying herself at the age of 41: “Suri is 14, so we’ve gotten through the sort of girlie stage. I feel like I can be more creative and have more time, have my voice. It’s sort of, like, just put your stuff out there and be yourself. It takes a while to be comfortable, though… People say you don’t really know yourself until you’re 40. I’m 41. I have seen things. I have experienced things. I know what I’m talking about, and I know that my feelings and my insights are worthy. I’m going to listen to myself instead of deferring to someone else. That’s a big step as a human. It takes time.

Being an actress in the ‘90s: “When I started, it was about being very mysterious. You were known through your work. There was much less attention in the ’90s than there is now, and as a young actress, you just want to get the job. You want to be liked. You want a good take and think, “Was I good enough?” Over time there’s a transition. I have my own confidence now. I’m not looking for somebody else to say, “Good job.” It’s more, “What are we going for?” It’s more collaborative.

Her New York life, where she has a book club: “I’ll take a class at Broadway Dance Center. I’ll go to the Joyce Theater. I do hot yoga and boxing classes. I have a book club. The city has a lot to offer, and I use it. Yes, it’s a little too exposed at times, and we work hard to maneuver and navigate. But what I love about New York is that for me and my child, this is our vibe. When there are 25 things to do every night, it takes you out of your own thing. And you know what else I discovered? There’s a place not far from my house that does foot massages until midnight. That’s what New York offers!

On her 40s: “As I told a friend of mine, “You know what’s so upsetting about the 40s? My old tricks don’t work.” [laughs] I have older siblings; I’m the baby of five. So I was always the cute one, and you get used to being the little cute one. Then you wake up one day — I’m basically always putting lotion on. I do all that Barbara Sturm stuff: hyaluronic, face brightening, face cream, skin cream. It’s so vain. But that happens. It kind of hits you….It’s very odd. I used to get away with no makeup. When I was a teenager and a young actress, it was about being sort of grungy. Now I’m like, “Oh god, I have to do stuff!” It sounds so superficial.

That famous cashmere bra moment: “Honestly, I wasn’t feeling so sexy. And I saw that and was like, “Sexy. I can do that!” I thought it would be good if I was in a cabin sitting by the fire and wore the [matching] sweater over it. That’s how my brain works. But then I was like, “Oh, wait, I’m not in a cabin, and I’m not going to a cabin.” I still thought I could pull it off, though. I had noticed other people wearing bras with blazers.

She also says some stuff about Suri and how proud she is of how hard Suri works and how open Suri is to try new things. I previously described Katie’s New York life as that as rich trophy wife with no husband, and I still stand by that. She works when she wants to, she spends time with her kid, and she fills up the rest of her life with galleries and museums and plays and dinners and facials. She’s right about ageing too – one day you wake up and you’re like “g-ddamn it, I used to be able to look cute on four hours of sleep and no night cream, what happened.” Now I can see it immediately in the morning if I forgot to put on night cream. Ageing is a disaster.

"I love her so much. My biggest goal has always been to nurture her into her individuality. To make sure she is 100 percent herself and strong, confident, and able. And to know it." @katieholmes212 talks about her sweet and self-assured daughter Suri in the #linkinbio. #katieholmes

Cover and IGs courtesy of InStyle.