Kyle Richards is finally addressing her new look. The Real Housewives of Beverly Hills star took to Instagram Story to reveal that she got a nose job after breaking her nose last year. The posts came after fans kept commenting on how different she looked in her recent photos.

“Since so many of you were speculating what I did or did not do to my face…here is your answer. I fixed my nose,” Richards wrote on Friday. “I broke it last September and the bone poking out bothered me. So I fixed the bone, fixed my breathing problems and refined the top. I will always tell you guys the truth. I do think some of the comments on my posts are funny though.” 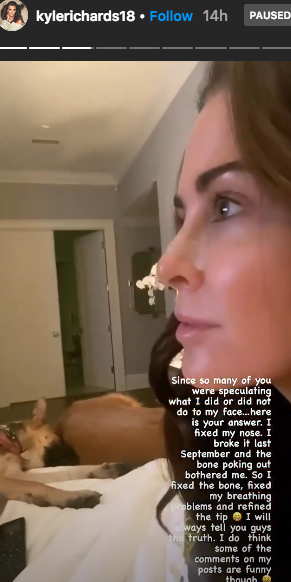 On Saturday, she continued by sharing photos of how her nose looked 10 days after her surgery. “Still swollen which it will be for a while,” she wrote. “Final result is actually at one year.”

Richards added that the procedure was “not painful” and she enjoyed the downtime while recovering. She is three weeks post operation and “it will get better with time,” she shared.

Richards, meanwhile, also promoted her new film, Halloween Kills, which will be released next October.

The film was originally scheduled to hit theaters this month, but its release date was moved amid the pandemic. ET spoke with Richards, as well as Jamie Lee Curtis, about returning to their horror roots.

“It was just really exciting to have them bring my character back after 40 years,” the reality star told ET. “When I was 8 years old, and did the original Halloween, the night I wrapped [Curtis] carried me to my dressing room.”

Hear more of what she shared in the video below.

Related posts:
TV and Movies
'The Real Housewives of Dallas' Season 5 Trailer Is Here! (Exclusive)
Coronation Street: Is Steve McDonald a twin?
The truth about Josh O’Connor’s girlfriend
The Big Bang Theory fans notice amazing connection between Mayim Bialik and Amy
Recent Posts
This website uses cookies to improve your user experience and to provide you with advertisements that are relevant to your interests. By continuing to browse the site you are agreeing to our use of cookies.Ok