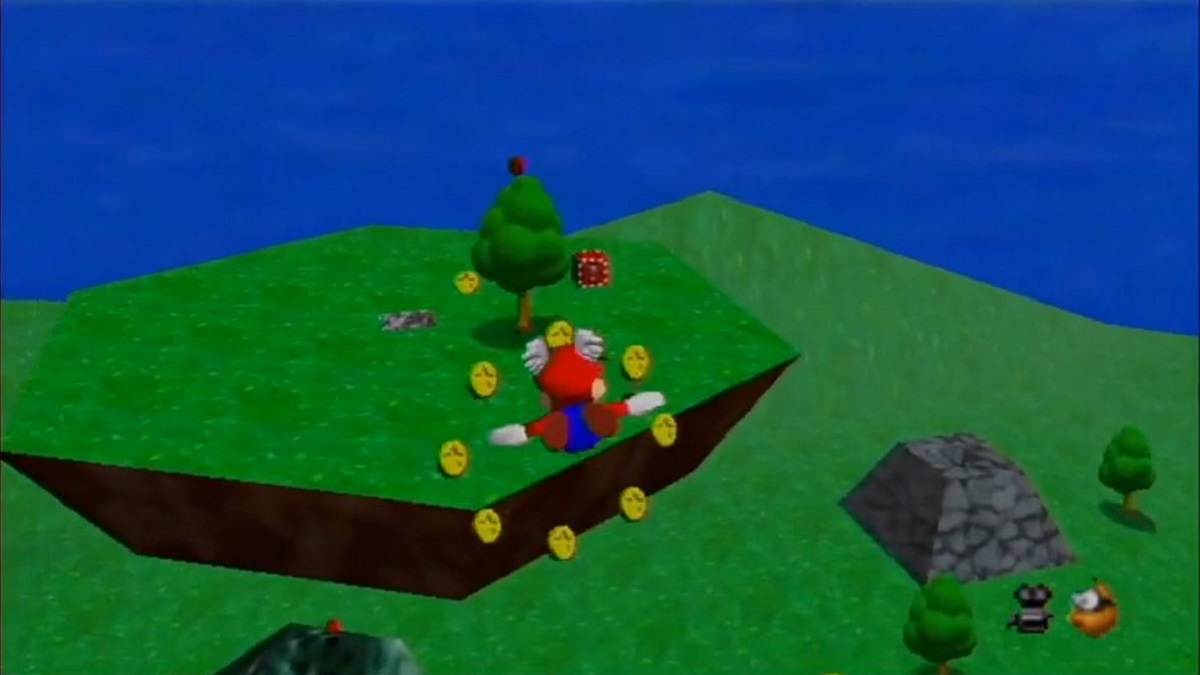 Mario Wings to the Sky is one of the Bob-omb Battlefield missions players must complete in Super Mario 64.

Super Mario 64 players must complete the Mario Wings to the Sky mission and earn a Power Star before they can earn the other Stars in Super Mario 64’s Bob-omb Battlefield course.

The Mario Wings to the Sky mission involves flying through five rings of coins suspended mid-air and collecting a coin in the center of each ring.

Collecting all five coins is challenging but you can learn how to complete the Mario Wings to the Sky mission and earn the Super Mario 64 Power Star by following the instructions provided in this guide.

The easiest way to collect the coins and complete the Mario Wings to the Sky challenge in Super Mario 64 is to first find and grab a Wing Cap.

When Mario wears the Wing Cap, he is able to fly and maneuver in the air to reach the coins.

To activate the Wing Cap you first need to have collected ten stars from other levels, such as Whomp King’s Fortress.

After collecting the ten stars return to the castle’s main lobby and stand under the light from the ceiling. Look up at the light and you will be transported to a tower in the sky (Tower of the Wing Cap) where you will find a big red switch.

Hit the red switch to activate all the red boxes in the game containing the Wing Cap.

Players can also obtain a Power Star in the Tower of the Wing Cap by gliding around and collecting eight red coins.

After you have hit the red switch you can exit the Tower of the Wing Cap level and return to the Bob-omb Battlefield course.

On the Bob-omb Battlefield, run to the stone pyramid where there is a cannon. Climb into the cannon and use it to project yourself onto the island platform where you there are a tree, a red box, and a second cannon (see YouTube video below).

Hit the red block and claim the Wing Cap.

Then use the second cannon on the platform to project yourself into the coin ring floating in the sky. Make sure you set your sights on the coin in the center.

If you are unable to collect all five coins during the first flight, you can turn around in the air and go back for a second sweep.

But keep in mind that the Wing Cap power-up lasts only 60 seconds so you need to collect all the coins as quickly as you can.

Get the Power Star

After you have collected all five coins, you will then encounter the Power Star.

The Mario Wings to the Sky challenge ends when you acquire the Power Star.

After that, you can go on to win more Bob-omb Battlefield Stars or go to another Super Mario 64 course.

Related posts:
TV and Movies
The Voice's Return Has Made Me Irrationally Happy — Here's Why
'Big Bang Theory' Star Mayim Bialik Suspects She Was the Second Choice for Amy Farrah Fowler — Here's Why
John Travolta's nephew dies just weeks after wife Kelly Preston loses breast cancer battle
I’m A Celebrity crew given ‘proximity monitors’ as Covid-19 risks show’s future
Recent Posts
This website uses cookies to improve your user experience and to provide you with advertisements that are relevant to your interests. By continuing to browse the site you are agreeing to our use of cookies.Ok