After struggling to land a 1½ twist vault, a clearly distraught Simone Biles exited the Olympic gymnastics competition floor with her trainer. She would later return but not to compete. Initially, it was reported that Biles had pulled out of the competition as a result of a medical condition. “Simone has withdrawn from the team final competition because of a medical issue,” USA Gymnastics said in a released statement. “She will be assessed daily to determine medical clearance for future competitions.” Later, Biles shared that she left for mental health reasons.

“After the performance that I did, I didn’t want to go into any of the other events second-guessing myself, so I thought it was better if I took a step back and let these girls go out there and do the job, and they did just that,” Biles said. “I was struggling with some things.”

After learning that Biles’s medical condition was not “physical,” many took to social media to criticize her decision, arguing that if she was physically capable to compete, she should have. Some even evoked ’90s Olympic gymnast Kerri Strug, who vaulted on a broken ankle during the 1996 Summer Olympics.

But mental health is physical health. Period. End of story. Not being mentally able to compete is just as real and just as valid as a physical impediment. In fact, Biles herself noted that being in the wrong headspace could lead to a physical injury. “No injury, thankfully, and that’s why I took a step back: because I didn’t want to do something silly out there and get injured,” Biles told reporters at a press conference. 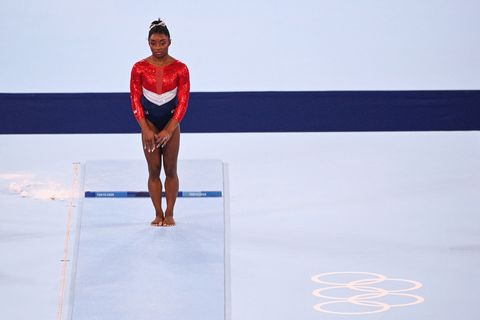 Hell, simply google the symptoms of depression, anxiety, and post-traumatic stress disorder if you don’t understand how physical mental health truly is. From changes in a person’s appetite to the inability to sleep to a lack of physical energy, it’s clear that mental and physical health go hand in hand. One study found that psychological well-being can reduce the risk of heart attacks and strokes, while poor mental health can lead to diabetes, asthma, arthritis, and other chronic illnesses.

Society pays a lot of lip service to protecting one’s mental health, yet those messages evaporate the moment an act of self-care becomes inconvenient or disruptive. Instead, we’re happy to commodify mental health and sell it to the affluent and the white, equating self-care to nothing more than an expensive pedicure or a pricey massage while limiting access to true mental health care, especially for BIPOC people. We’re sold a hollow version of mental health care in a system that stigmatizes and attacks the Simone Biles and Serena Williams and Naomi Osakas of the world when they do, in fact, make difficult decisions to practice actual self-care in the public eye.

Not being mentally able to compete is just as real and just as valid as a physical impediment.

Biles walked into the pandemic-delayed Tokyo Olympics under an undeniably enormous amount of pressure, and just like pressure can break a bone, that pressure harmed her mental health. She had been training, in both body and mind, for the Games, knowing the spotlight would be nearly entirely on her. “Therapy has helped a lot, as well as medicine. That’s all been going really well,” Biles said. “Whenever you get in high-stress situations, you kind of freak out and don’t know really well how to handle all of those emotions, especially at the Games.”

Just like any other sports-related injury, Biles couldn’t have predicted that her mental health was going to suffer enough to warrant her withdrawal. Thankfully, she did have the strength to remove herself from a situation that was causing her harm in the moment and could have caused her more harm in the future.

Self-care is not supposed to be easy. If it were, perhaps 40 million of Americans over the age of 18, especially millennials and Gen Z, wouldn’t suffer from anxiety. And safeguarding your mental health isn’t effortless. Otherwise, nearly half of the 60 million adults and children who have a mental health issue wouldn’t go without mental health care.

Which is why what Simone Biles did during the team finals is so much more impressive than pulling off a 2½ twist vault, and so much more powerful than her signature triple-double. She showed the world that mental health is physical health, that you cannot protect one without prioritizing the other, and that sometimes the best gymnastics move you can stick is the decision to walk off the mat and put your well-being first.