Diamonte “Saweetie” Harper is the consummate businesswoman. The 26-year-old University of Southern California graduate is gearing up to release her new Jhene Aiko-assisted video, Back to the Streets, prepping her debut album and running a non-profit organization. And she’s doing it all with impeccable flair.

When Saweetie spoke with ESSENCE, she was comfortably dripped, wearing a fitted tank, silver hoops and a white trucker hat that read “Icy.” Her swept baby hairs carefully peeked from underneath her hat’s rim and her apricot-colored, coffin-style acrylics were decked out with iridescent crystals. They don’t call her the “Icy Girl” for no reason.

“Girl, I’m just rushing in from a vocal lesson,” she said during our initial hellos. She’s recently gotten into singing, as showcased in her latest single Back to the Streets, and is using it as a way to express her femininity. “I feel sensual when I’m singing,” she said. “I think it just unlocks another layer of who I am.”

In Back to the Streets, the artist offers a fresh take on the breakup anthem, encouraging women to step into their power, instead of exclusively lamenting on a lost love. “I feel like if I was dealing with somebody who was wasting my time and who was toxic, for me, it would be more of a celebratory moment,” she shared. “I wanted to give the world a breakup song that was happy. Yes, you’re angry, yes, you’re sad, but it’s good to get back to self.” 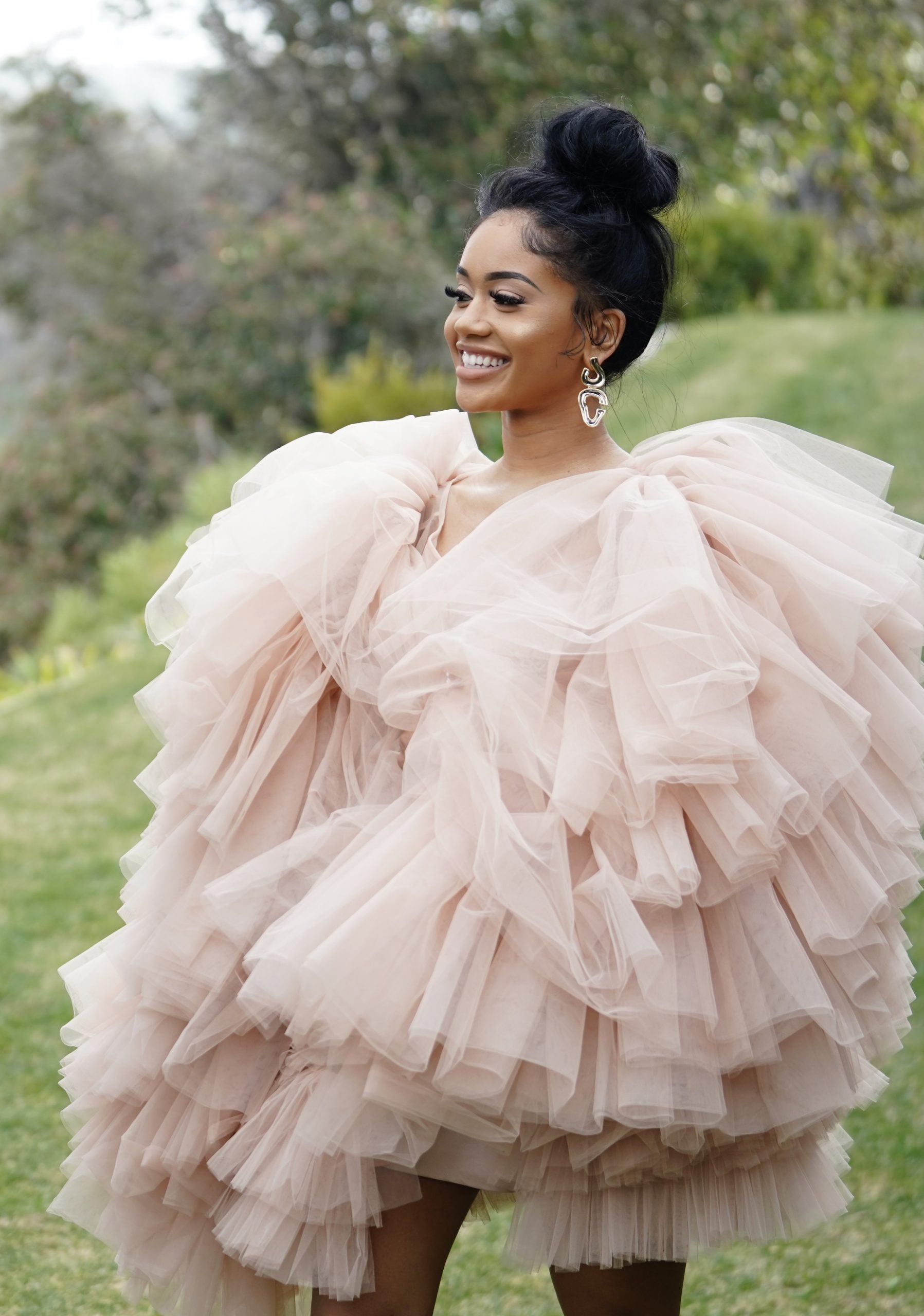 For Saweetie, self is all about hard work, as she takes a healthy dose of inspiration from her paternal grandmother. When I asked who she molded herself after in the early days of her career, I mistakenly expected a fellow artist, but she was quick to show love to her 71-year-old grandmother. “She was a real estate agent,” the rapper said with a smile. “I saw her work in her kitchen—that was her office space. I saw her and her team of two girls work their asses off, be fly and be successful. Their team was small, which meant that they had work ethic.” The My Type singer has certainly inherited her grandmother’s capacity to push herself as an entrepreneur and also serve a (viral) look in the process.

She also talked about her dream collaboration for her album, Pretty Bitch Music, due out in 2021. “I would love to get some Aaliyah vocals,” Saweetie said. “I think that’s the only person I really fan-girled over growing up. She was the only person I’d sit in front of a TV all day for—I knew all of the lyrics and all of the routines.” Like some of her peers, Saweetie has a special reverence for the ’90s and 2000s, citing Destiny’s Child as childhood favorites and reworking popular, nostalgic singles (like Khia’s My Neck, My Back and Petey Pablo’s Freek-a-leek) while giving them a modern twist.

In addition to her work as an artist, the California native is a philanthropist and spends time giving back to the people who need it most. “I founded my own non-profiit organization with my grandmother,” she revealed. After the state-sanctioned deaths of Breonna Taylor and George Floyd, she was pushed to help make a change in whatever way she could. She later added, “I’ve been really inspired during these times to give back to my community.”

Make no mistake about it—Saweetie doesn’t only have fashion and career goals. She’s a compassionate, determined young woman with a deep understanding of traditional values, blessed with the capability to make them appealing to a generation focused on blazing new trails. She’s a 21st-Century renaissance woman with her manicured hands in multiple pots, and we’re loving every minute of her evolution.

Watch a behind-the-scenes trailer of Back to the Streets below.

Related posts:
TV and Movies
Coronation Street star Sair Khan confirms Geoff and Alya rooftop stunt
Doctor Who Special Trailer Features Two Returning Jacks, Suped-Up Daleks
Joss Whedon Leaves HBO's New Series 'The Nevers' Before Production Begins
Who was April Boy Regino?
Recent Posts
This website uses cookies to improve your user experience and to provide you with advertisements that are relevant to your interests. By continuing to browse the site you are agreeing to our use of cookies.Ok