Sharna Burgess is tired of being asked about her relationship status. During a recent Q&A on her Instagram Story, the 35-year-old Dancing with the Stars pro told her fans to stop asking about her love life.

The comment came after Burgess was seen packing on the PDA while on vacation with Brian Austin Green.

“Lol. Y’all don’t give up on this one,” Burgess wrote after one fan asked about her love life. “It’s almost impossible to fish out real questions amidst the ones about my relationship status.”

“I say this with love and kindness. Let it go,” she added. 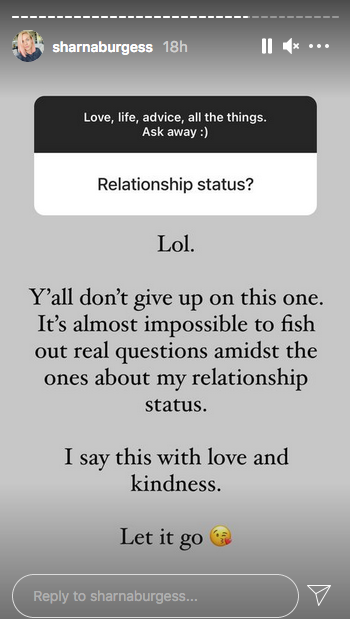 Another fan celebrated Burgess for how she “embraced being single so you could fall in love with yourself,” a compliment the dancer seemed to appreciate.

“Best thing I ever did,” she wrote with a heart emoji. “Well one of them lol.” 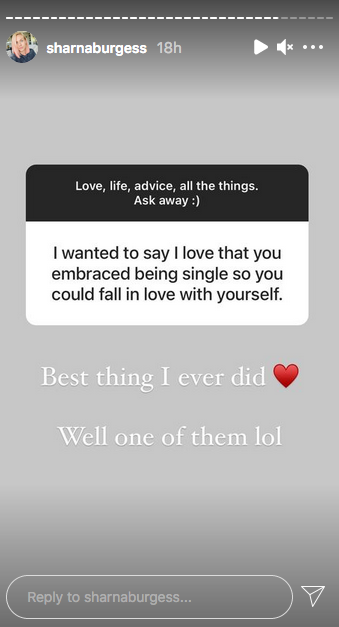 Burgess and Green, 47, recently took a Hawaiian vacation together, where they were spotted sharing a steamy kiss on the beach. Amid their getaway, a source told ET that the pair is “casually seeing each other.”

“Sharna was dating Jason [Oppenheim] from Selling Sunset and now she bounced to Brian. She’s dating around and having fun, it’s not serious with anyone,” the source said. “Usually she’s pretty open and likes to talk about who she’s seeing, but she’s staying pretty tightlipped about Brian.”

In an Instagram post that came during her tropical getaway, Burgess wrote about going into 2021 with love.

“We cannot change what we cannot control, so we must focus on how we act and react to the world around us,” she wrote in part. “I choose to react with kindness, respect, understanding, optimism, positivity, wholehearted gratitude and above all else, love. Love for myself, love for my people, and love for even those who haven’t got it for me… yet ;)”

“I have no resolution this year other than to move forward with the same intentions, and hopefully inspire some people along the way,” she added.

Watch the video below for more on the actor.