No one expected Julia Louis-Dreyfus to heel clack her way into the Marvel Cinematic Universe as Valentina Allegra de Fontaine—“you can just call me Val, but don’t call me Val”—and absolutely no one is mad about it.

“Look, I woulda killed the bastard too,” de Fontaine tells a disgraced John Walker, fresh out of his war criminal hearing (he got a slap on the super soldier wrist). “These guys in ties—ya know,” she rubs her fingers together in a universal money-talks gesture, “they got a whole thing to protect.” De Fontaine knows both that Walker took the Super Soldier Serum and that he no longer has Captain America’s shield—how? we’ll get to that—and all she wants is for him to answer the phone when she calls. Then she gives Walker’s wife her card (it’s blank) in throwback Nick Fury fashion. “[Taking the serum] has made you very very valuable to certain people.” Walker is stunned. Oh, he will definitely pick up that phone.

De Fontaine, like most everything else in the MCU, was born on the comic page. She first appeared in 1967, meaning there is a lot of comic history behind the Louis-Dreyfus character. But, as it turns out, there’s not a whole lot of known history about the character herself within the comics, which makes her a (somewhat) blank slate for future Marvel franchises. What role will de Fontaine play in the next phase of the MCU? We’re hoping it’s a major one—and a report from Vanity Fair seems to think she will be.

Here’s what to know about her comic inspiration first. 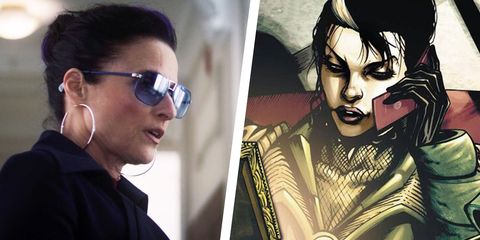 De Fontaine began her comic run as an agent of S.H.I.E.L.D. She bested Nick Fury in hand-to-hand combat during training, earning his respect. Later, the two characters became lovers. De Fontaine, however, remained jealous of Fury’s other relationships, and even flirted with Captain America, who at one point fought with Fury over de Fontaine. De Fontaine also lead a group of elite female agents, rubbing shoulders with Sharon Carter—not too happy about her flirtations with Captain America.

De Fontaine’s allegiances oscillated during her comic run. At one point she joined Hydra, manipulating them into causing a war. She was also allegedly working as a Russian secret agent during her time at S.H.I.E.L.D. For these offenses, she was detained by Interpol. Her motivations seem to be power and chaos.

What role will Valentina Allegra de Fontaine play in the MCU?

Minor characters across both WandaVision and The Falcon and the Winter Soldier—including Billy and Tommy Maximoff (Wican and Speed), Eli Bradley (Patriot), and Joaquin Torres (Falcon)—have already suggested the formation of a future Young Avengers. (Add to this Kate Bishop in the upcoming Hawkeye.) With the absence of Hydra, however, it seems the future heroes are missing some future villains.

Enter—heels echo clacking down a marble hall—Valentina Allegra de Fontaine. We know she already has connections across international power groups and perhaps sleeper cell Hydra (how else would she have known about Walker’s super soldier status?). And if her recruitment of Walker is any indication of future formations, de Fontaine has far more planned. Perhaps she is gathering forces to oppose those “guys in ties,” congressional and military leadership who aren’t up to snuff—a motivation consistent with bad guy trope #321: America needs leaders willing get their hands dirty.

Whatever dirty work de Fontaine has planned, we want Louis-Dreyfus leading the way for all future MCU villainy.