The way Halsey fans stay fed — even in a pandemic — is incredible. Your queen published a book, I Would Leave Me If I Could, and dropped a makeup line, about-face. And now, here’s another beautiful milestone you get to celebrate with your fave: her first child. On Jan. 27, 2021, Halsey broke the Internet with dreamy, Bohemian (read: Libra AF) maternity photos, thereby revealing her pregnancy and possibly a new relationship. While elated by these new developments, you’re also probably wondering: Who is Alev Aydin?

If you’re anything like me, as soon as you came down from the high of Halsey’s surprise, you clicked on the Instagram handle tagged on her belly. You likely wondered — is @zoneaydin Halsey’s baby daddy? Her boyfriend? Or just a friend?

Either way, you probably sleuthed Aydin’s Instagram out the way you would a friend’s new crush. Because unlike Halsey’s past exes, both rumored and confirmed (such as Cara Delevingne, Evan Peters, Yungblud, and G-Eazy), Aydin is not a household name. And unfortunately, like the feeds of artsy boys across the globe, Aydin’s Instagram doesn’t reveal too much about who he is. But lucky for you, I’ve looked around for all the tea on Aydin so you don’t have to. Let’s dive in, shall we?

According to Aydin’s IMDB, he wrote and directed HipMen: Los Angeles, a crime drama comedy released in 2017. He also produced and wrote 2017 comedy series Small Shots, about two aspiring actors trying to make it in Hollywood.

He Has Turkish Roots

Most of Aydin’s feed is just dreamy images on film, often Turkey. In one post, he wrote, "In February, I went back to the motherland for about a month. Bittersweet this time though. Here’s a shot I took on damaged film that captures that sentiment." (Also, if you peeped that Halsey has been spending lots of time in Turkey, here you go. This is apparently what was up.)

One thing to know about Halsey, she loves to paint. Apart from the original art she posts on social media, Halsey has also shared a time-lapse video of her painting as an alternate video for "Graveyard" in Oct. 2019. In late Oct. 2020, she worked on a Halloween painting and shared it to Instagram. The next day, Halsey was seen copping more art supplies in LA with — you guessed it! — Aydin. The Daily Mail called Aydin her "pal."

They Got Matching Tats In June 2020 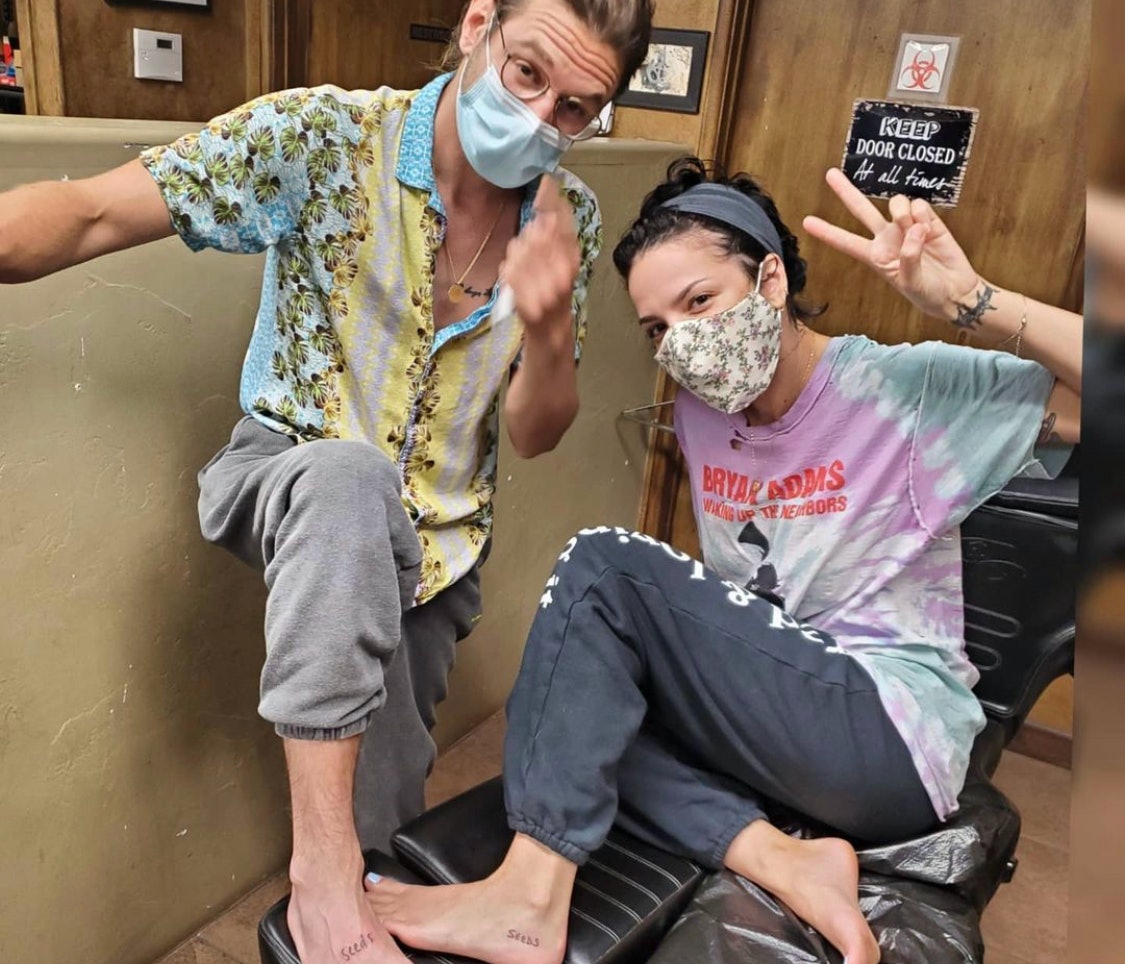 Back in June 2020, both Halsey and Aydin got matching tattoos on their feet that say "seeds." According to tattoo artist Amanda Owley, their tattoos are in each other’s handwriting, and Halsey said that week was a cosmically good one to plant seeds in her life. "They wanted to get the words on their feet because it was closest to the earth," Owley told PEOPLE. I’m not crying, you’re crying.

He Cares About Social Justice Issues

On June 2, 2020, Aydin shared a post listing antiracist organizations such as the Black Lives Matter, the George Floyd Memorial Fund, National Bail Out, and Black Visions Collective, among others. "Aside from the orgs listed (tagged) here, there are others also in need of every dollar in their efforts to undo centuries-old systems that have dismantled Black communities for generations, and disenfranchised so many," he wrote.

"Police PACs have used their money for decades to wield an ungodly and egregious amount of influence in the political space, which is why (among a long history of perpetual atrocity at the hands of police) the entire country burns as the leadership in MN refuses to arrest the three other officers involved in George Floyd’s murder," he continued. "Please use your money in aid of these organizations and help them fight this fight."

Last but not least, he’s already proving to be an adorable addition to Halsey’s life, if his social media presence is any indication. (This tenderness totally makes sense, as Aydin is a Pisces.) Along with re-sharing Halsey’s pregnancy post to his Story with hearts, he commented, "Heart so full, I love you, sweetness ❤️❤️." To which, Halsey replied, "I love you!!! And I love this mini human already!" BRB, my heart’s going to burst.

Even though Aydin is a bit of a mystery as far as who he is and what he means to Halsey, all signs point to him being a great addition to her life. Looks like there’s a rainbow after the storm that was 2020 after all.