Behind every powerful man is an even more powerful woman, and for Novak Djokovic, this could not be more true. Despite Djokovic’s spotty history with women, his wife has stood by him through all the ups and downs. Djokovic ran into some trouble in 2016 when he made some pretty sexist comments about the amount of money he felt female tennis players should be allowed to win.

Djokovic took the side that they should not be allowed to earn as much money as men because they don’t have as many spectators. He did add, however, that he admires the hard work they have to do given their complicated bodies. He said, “They have to go through a lot of different things that we don’t have to go through. You know, the hormones and different stuff, we don’t need to go into details,” per ESPN. It’s not like anyone asked, but whatever.

When asked for her opinion of Djokovic’s statement, Serena Williams said, “Novak is entitled to his opinion but if he has a daughter — I think he has a son right now — he should talk to her and tell her how his son deserves more money because he is a boy,” per Huffpost. Basically no one agree with him, except for presumably his wife, who didn’t immediately leave.

So, what do we know about the woman behind the man, other than that she seems to be good at forgiving and forgetting? Let’s investigate.

Novak and Jelena Djokovic have a long history 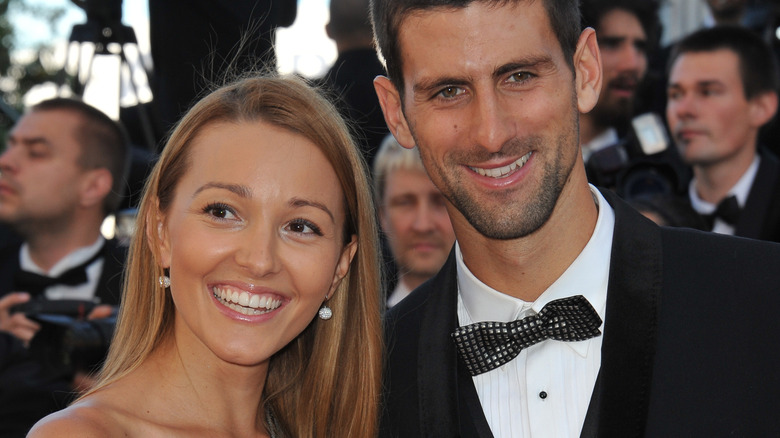 You might think that as the reigning champ of men’s tennis, Novak Djokovic would have married a supermodel or an actor, but he didn’t. Djokovic met his wife, Jelena Djokovic, in a much more common way. The pair was first introduced in high school when they both played for their school’s tennis teams in Serbia. It’s probably good Jelena already had an interest in tennis, considering that she would go on to spend much of her adult life sitting in the blazing hot sun watching her husband play.

After high school, Novak turned pro and Jelena went on to get a bachelor’s degree in marketing. Jelena put her career on hold for a bit to be able to tour with Novak and raise their three kids. These days, though, she’s putting the degree to work by serving as the co-founder and global CEO of the Novak Djokovic Foundation, which aims to provide underprivileged children with a fully funded preschool education, per Good Housekeeping.

For all his issues with women, Novak is grateful for his wife. Novak told Hello Magazine that the moment he, his wife, and his young son officially became a family was one of the happiest in his life. “I was trying to be present in that moment and memorize it. I was focused on her, and her smile, and our baby. It really was a perfect moment.” Aww, maybe he’s not so bad after all.