Those who tuned in for Prince Philip’s funeral on Saturday may have noticed that the Duke of Edinburgh’s casket wasn’t carried to St. George’s Chapel in a typical hearse.

That’s because the 99-year-old royal, who reportedly didn’t want a fuss made over his funeral, requested his casket be carried in a vehicle more personal to him: a Land Rover modified to his liking.

“Just stick me in the back of a Land Rover and drive me to Windsor,” Prince Philip, Queen Elizabeth II’s husband of more than 70 years, reportedly quipped about his funeral arrangements.

The duke got his wish.

His coffin, adorned with his naval cap, sword, a flag representative of his Greek and Danish heritage, and flowers chosen by the queen was carried by eight Grenadier guards dressed in red. The guards hoisted and fastened Prince Philip’s casket onto the back of the customized Land Rover. 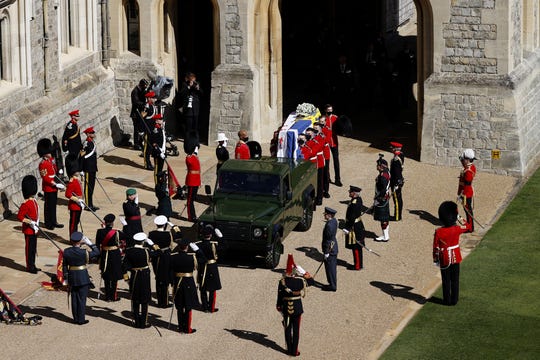 The Duke of Edinburgh’s coffin, covered with his personal standard, is carried to a custom Land Rover hearse during his funeral at Windsor Castle on April 17, 2021. (Photo: WPA Pool, Getty Images)

The truck drove the decorated casket out of the Windsor Castle quadrangle with a procession of family members following close behind on foot.

Once the Rover made it to St. George’s Chapel, eight uniformed pallbearers unhitched the coffin and carried it up the steps of the church.

According to Buckingham Palace, the duke picked out the Land Rover Defender TD5 130 that would bear his coffin 18 years ago and designed the chassis cab vehicle to his specifications. These included adding an open top rear section to carry his coffin and having the original Belize green color repainted dark bronze green – a color used for military Land Rovers and a nod to the prince’s military background.

The palace noted that Land Rover has maintained the vehicle since it was built in the company’s factory in Solihull, England, in 2003 and collaborated with the royal household to prepare it for the funeral. The vehicle underwent its final changes in 2019.

Here’s why she stays stoic: Will we see Queen Elizabeth crying at Prince Philip’s funeral? 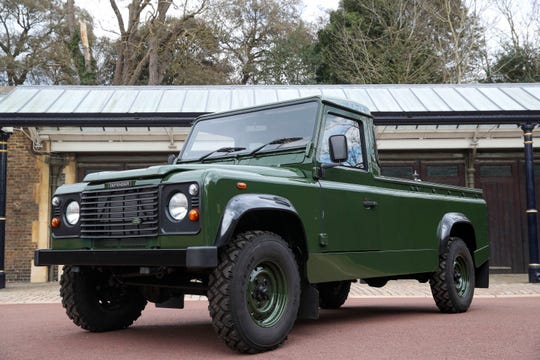 According to Buckingham Palace, Prince Philip picked out the Land Rover Defender TD5 130 that would bear his coffin 18 years ago and designed the chassis cab vehicle to his specifications. (Photo: STEVE PARSONS, POOL/AFP via Getty Images)

The truck is a sharp contrast to the hearses that have carried caskets at past funerals for royal family members. But British Prime Minister Boris Johnson said Monday that the Land Rover, with its “unique and idiosyncratic silhouette,” perfectly sums up the kind of person Prince Philip was.

“He was above all a practical man, who could take something very traditional, whether a machine or indeed a great national institution, and find a way by his own ingenuity to improve it, to adapt it for the 20th and the 21st century,” Johnson said.

“It is so much in his character – he used to drive around Sandringham in an electric van in the ’80s – that he would devise this,” she told USA TODAY Wednesday.

Who’s going to Prince Philip’s funeral? What to expect from the royal family