After a flood of Trump supporters wreaked havoc on the U.S. Capitol building on Jan. 6, lawmakers are calling for the second impeachment of President Donald Trump, with less than two weeks before the end of his term, when President-elect Joe Biden is scheduled to be sworn into office on Jan. 20. Both Democrats and Republicans in Congress have labeled these Capitol riots an attempted coup, influenced by Trump himself. In the aftermath of all this chaos, many Americans are wondering: Will Trump be impeached after the U.S. Capitol riot? Here’s what’s in the works so far.

On Wednesday, Jan. 6, Trump delivered a speech at his "Save America" rally, held at the nation’s capital, where he once again made unsubstantiated claims that the November 2020 election was stolen from him. "We will never give up. We will never concede," he stated to the cheering crowd. "Together we will drain the Washington swamp and we will clean up the corruption in our nation’s capital," he added. "It’s a dirty business." After Trump’s rally came to a close, the roused mob marched on the Capitol building, and chaos ensued, putting American lawmakers — and American democracy itself — in grave danger. Photos and videos of the situation showed lawmakers hiding from the mob, barricaded doors, and Capitol security with guns pointed at rioters attempting to break into the chambers of Congress. 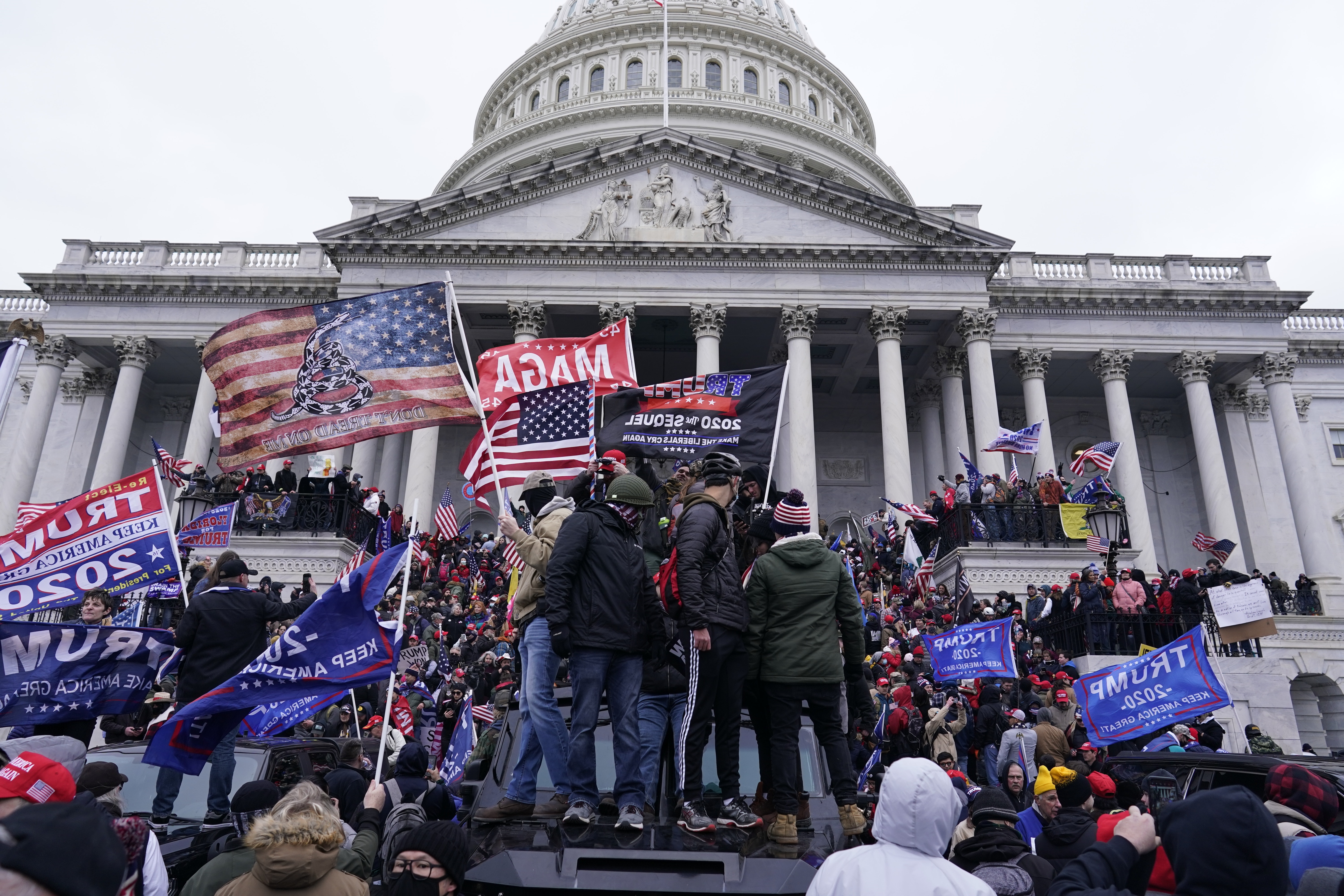 Around the country and the world, many people were horrified at Trump’s role in inciting the violence, and his initial refusal to disavow it or tell rioters to return home. The White House did not reply to Elite Daily’s request for comment on the situation and Trump’s role. Following the riot, Rep. Ilhan Omar announced via Twitter she was drawing up the Articles of Impeachment to remove Trump from office.

"Donald J. Trump should be impeached by the House of Representatives and removed from office by the United States Senate," Omar wrote. "We can’t allow him to remain in office, it’s a matter of preserving our Republic and we need to fulfill our oath," she added. When Trump first began discussing his refusal to facilitate a peaceful transition of power in September 2020, Omar discussed her own experiences as a child refugee from Somalia — providing a cryptic warning that rings especially true in the Capitol riot’s aftermath: "As a little girl, I witnessed what happens when you do not have a peaceful transfer of power,” she wrote in a Sept. 24 tweet. “It leads to instability, violence, and sometimes war. For the first time, I fear that could happen in this country.” Since the U.S. Capitol riots ensued on Jan. 6, reports of riots in state capitols have been recorded in Arizona, California, Georgia, Ohio, and more. 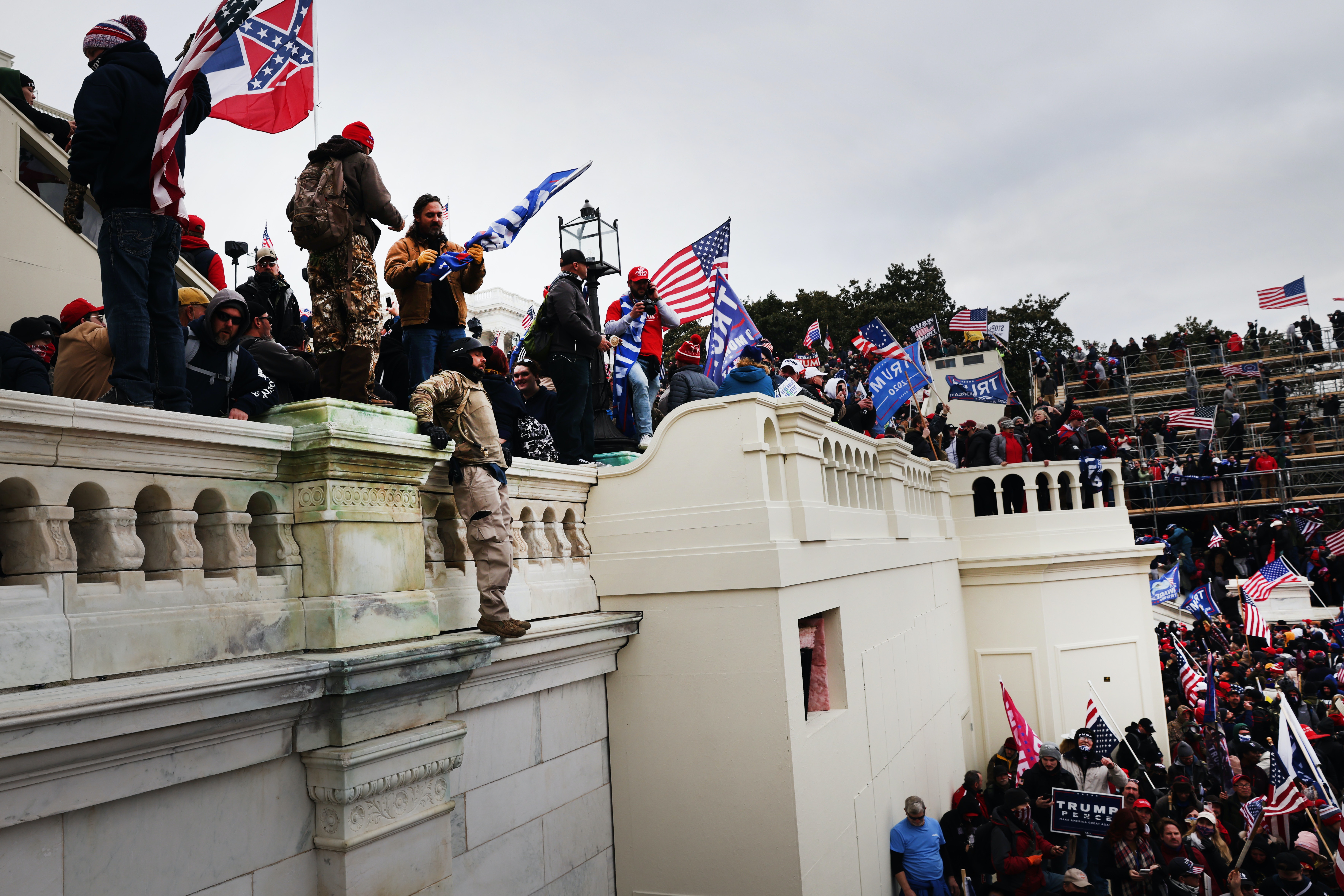 In a Jan. 7 tweet, Omar released the Articles of Impeachment for introduction, which she drafted while she was sheltering in a secure location in the midst of the riots.

In addition to Omar, a growing collection of lawmakers are also calling for Trump’s impeachment, including Massachusetts Sen. Ed Markey and Illinois Gov. J.B. Pritzker, New York Rep. Alexandria Ocasio-Cortez, as well as Republican Vermont Gov. Phil Scott. In a Jan. 6 statement, Assistant House Speaker Katherine Clark implored Congress to take action. "Despite the seditious attempt to overthrow our democracy, we in Congress will fulfill our duty to ensure the will of the people and the integrity of our democracy are upheld. But the next days and weeks remain dangerous," she stated. "Donald Trump is a traitor to our country and our Constitution. He must be removed from office and prevented from further endangering our country and our people," she added.

Trump has already been impeached once by the House during the 2019 investigations by former special agent Robert Mueller for abuse of power and obstruction of Congress — however, the Senate voted to acquit him of all charges, and he was permitted to remain in office. Now, in 2021, Trump may face a new federal charge for potentially inciting the U.S. Capitol riots.

But with a mere 14 days left in his presidency, it’s highly unlikely that any efforts to remove Trump from office would succeed. However, a speedier option might be in play — critics of the president are also putting pressure on Vice President Mike Pence to remove Trump from office under the 25th Amendment, which allows for the removal of a president who is unable to perform his duties. While this has historically been understood as a way to step in if a president becomes ill, injured, or dies while in office, many are pushing Pence to invoke it in response to the recent riot.

As of Jan. 7, it’s unclear whether the House will take up the new articles of impeachment, or even if there will be enough time to consider them before the end of Trump’s term on Jan. 20.