Labor leader Anthony Albanese has called on the federal government to dispatch its fleet of Royal Australia Air Force VIP jets to bring stranded Australians home "100 at a time".

More than 23,000 Australian citizens remain stuck abroad because of a collapse in international flights caused by border closures and have been unable to secure or pay the inflated prices for a flight home. 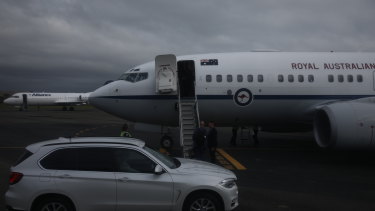 He said the fleet was largely "sitting idle" and there was "nothing to stop those planes being utilised".

"There are two large aircraft, but there are other smaller aircraft available as well," Mr Albanese said.

"It is simply unacceptable that the Prime Minister continues to say that there's nothing he can do about it and he hopes to have these families home by Christmas. Well, I think those who are desperate to get home should be brought home in September."

The fleet includes three Bombardier Challenger 604s and two Boeing 737 business jets which cost around $4600 an hour to operate. A typical 36-minute flight from the RAAF Canberra base to Sydney costs taxpayers on average about $2760.

Mr Albanese said Mr Morrison should not blame state governments when he was in charge of the nation's border.

He said many Australians had tried to come home for "many months" and they had been left frustrated by the lack of available flights and hugely inflated prices.

The federal opposition has stepped up pressure on the Morrison government and state and territory premiers to lift the cap on international arrivals each week, calling on national cabinet to end the "heartbreaking" stories of citizens stranded overseas.

It called on Sunday for a weekly limit of 4000 to be increased to ensure more Australians stranded overseas have the chance to fly home in a timely, affordable manner.

Home Affairs Minister Peter Dutton said on Sunday the number of people that Australia could bring in depended on whether the states would take more people into hotel quarantine.

"The number of people that we can bring in through the international ports at the moment is a function of, say for example, the Queensland government or Queensland Health's direction, that people hop off a plane from Los Angeles have to go into a hotel for two weeks," Mr Dutton told ABC television's Insiders program on Sunday.

"At the same time, they've got a cap on the number of places that they're making available at those hotels for quarantine."

Applicants will have to meet strict eligibility criteria to access the loans, and only the most vulnerable Australian citizens still overseas will be provided financial assistance.