Tropical Storm Laura and Tropical Storm Marco are organizing quickly and beginning to gain strength after days of struggling to survive. Both systems are forecast to make landfall next week along the Gulf Coast, one day apart and miles from each other.

Two hurricanes in the Gulf of Mexico at one time – if it occurs – would be a first on record.

The governors of Louisiana and Mississippi have both declared states of emergency.

On Saturday, hurricane hunters examining Tropical Storm Marco in the western Caribbean found a much more robust system, with intense thunderstorms blowing up near the center and stronger winds wrapping into the circulation. As of late morning, the storm was located near the western tip of Cuba. Winds were 65 mph and the system was moving north-northwest at 12 mph into the Gulf of Mexico.

Warm water will allow for a window of intensification, and Marco is expected to become a hurricane this weekend as it moves northwest toward Texas. However, upper level wind shear ahead of the system is forecast to weaken the system before landfall on Tuesday, likely along the Texas coast. 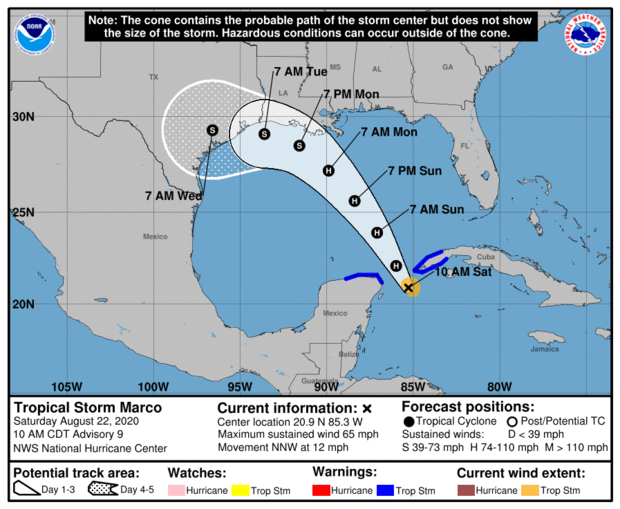 Tropical Storm Laura is also experiencing a large increase in thunderstorms but that has yet to translate into a surge of winds. As of 11 a.m., the National Hurricane Center said the storm was located just southwest of Puerto Rico, with winds of 40 mph. It is moving west at 18 mph. Given the mass of thunderstorms developing, winds will likely increase later on Saturday.

The storm is forecast to move near or over Hispaniola and Cuba which will disrupt the circulation somewhat, likely prohibiting it from gaining too much power in the short-term. But once the system reaches the Gulf of Mexico on Monday, light environmental winds and above normal water temperatures will likely fuel intensification.

Pictured in blue-green is wind shear which weakens systems. Each storm has an envelope & window of time w/o shear to intensify. Laura entering stage right is without shear for 2 days in the E. Gulf, a widow for rapid intensification IF it is not a shambles from island interaction pic.twitter.com/6KSDxGPLzs

As of Saturday, the storm is forecast to become a hurricane early next week before it makes landfall, possibly in Louisiana, or even Texas, on Wednesday. That means Marco and Laura may make landfall within hundreds of miles of one another, just 24 hours apart. 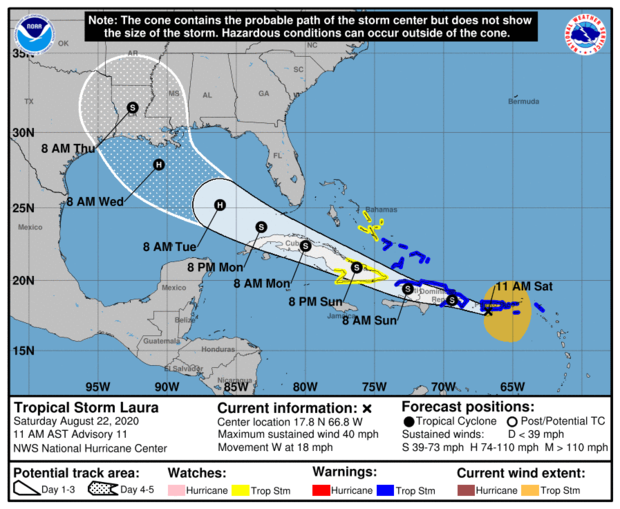 Despite the systems being so close to each other, they cannot combine to become a “supercane.” That’s because each system has sinking air on its outskirts, which presses down on the other system. So, when two systems are that close, the larger one tends to weaken the smaller one. And in some cases they can even dance around one another in a phenomena called the Fujiwhara effect.

The 2020 season is far ahead of record pace, with Marco being the earliest 14th named storm on record in the Atlantic. The former record for the 14th storm is September 2nd, set back in 2005 and 2011.

The record pace is partly due to abnormally warm sea surface temperatures across most of the Atlantic Ocean, which for most of the summer has been near record levels. Since 1900, Tropical Atlantic waters have warmed around 2 degrees Fahrenheit due to human-caused climate change. 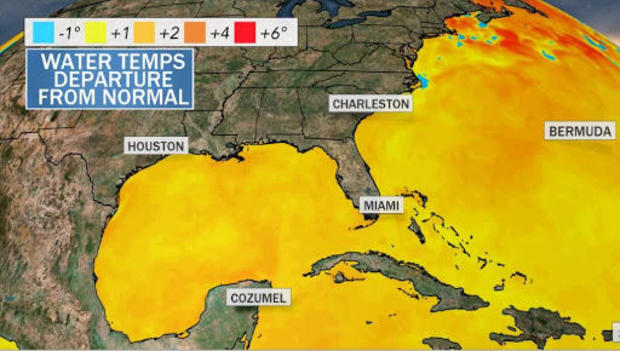 The warmer-than-normal water is like high-octane fuel for tropical systems. That’s why both Marco and especially Laura need to be monitored closely for rapid intensification, which can quickly turn a middle-of-the-road storm into a disastrous one, as it did with Hurricane Michael in 2018.

Rapid Intensification is becoming more common in a warmer world. Research from 2018 calculated that since the 1980s, rapid intensification has increased 4.4 mph per decade.