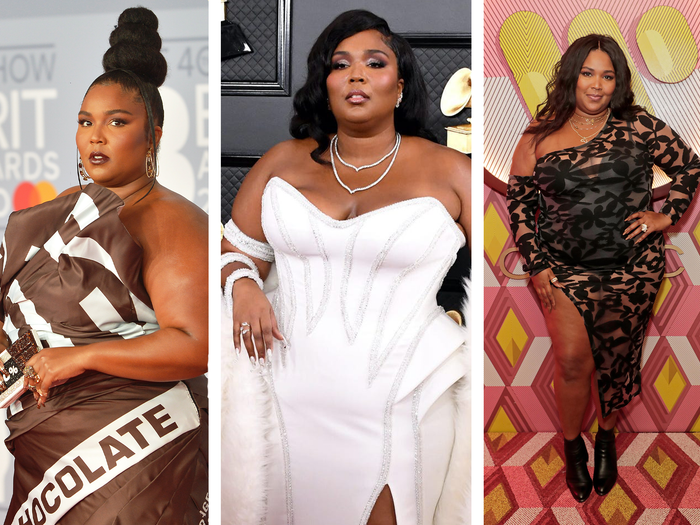 The 2020 Grammy Awards ceremony in January was a big night in both fashion and music for Lizzo. She started the night in a Versace gown. 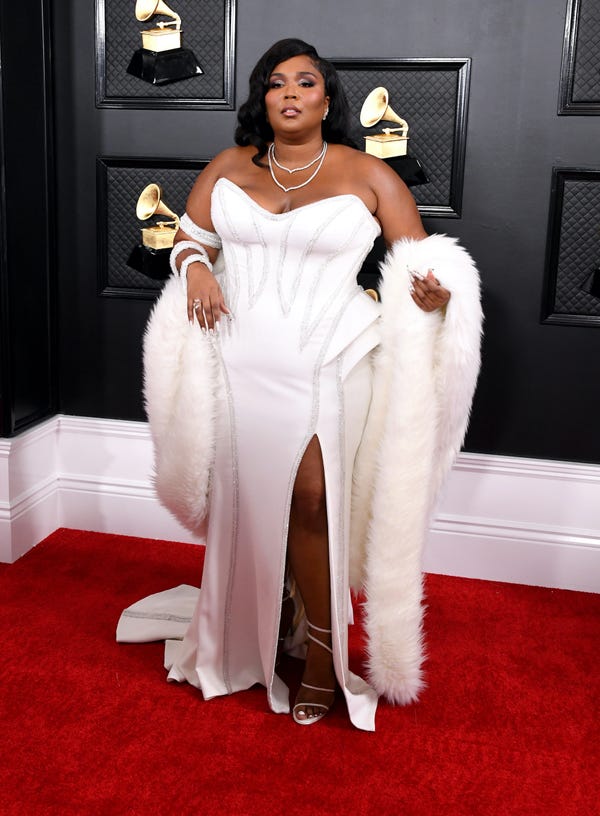 Lizzo walked down the red carpet in a white Versace gown that contained Swarovski crystals and took two months to make, her stylist told E! News.

Later in the night, Lizzo had an outfit change. She donned a billowy, off-shoulder black gown with sequins for her performance. 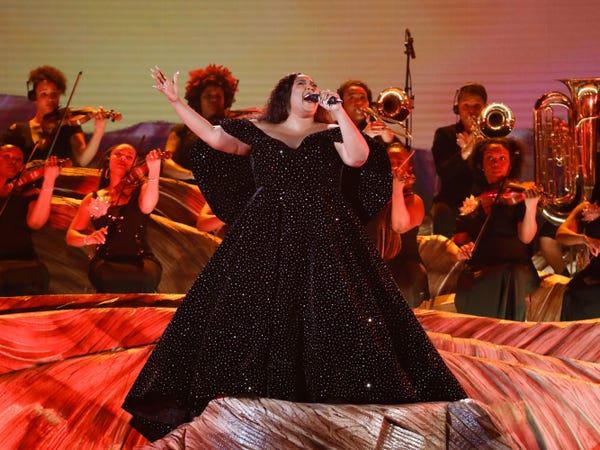 Lizzo paid tribute to late NBA legend Kobe Bryant, who had died in a helicopter crash earlier that same day, and performed her hits "Cuz I Love You" and "Truth Hurts."

On the red carpet for the BRIT Awards in February 2020, Lizzo dressed up in a brown dress modeled after a Hershey's chocolate bar wrapper and carried a matching purse also shaped like a bar of chocolate. 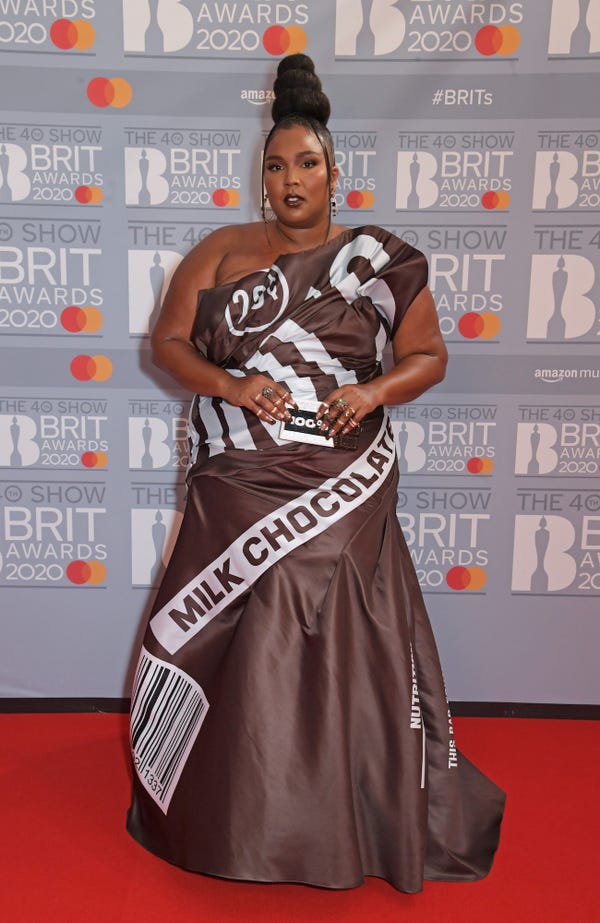 Per Insider style reporter Amanda Krause, the dress was from fashion label Moschino and Lizzo was styled by Brett Alan Nelson.

The brown dress had an asymmetrical neckline and a 25-cent pricetag.

Lizzo changed into a short black see-through dress for the BRIT Awards after-party hosted by Warner Music and CIROC. 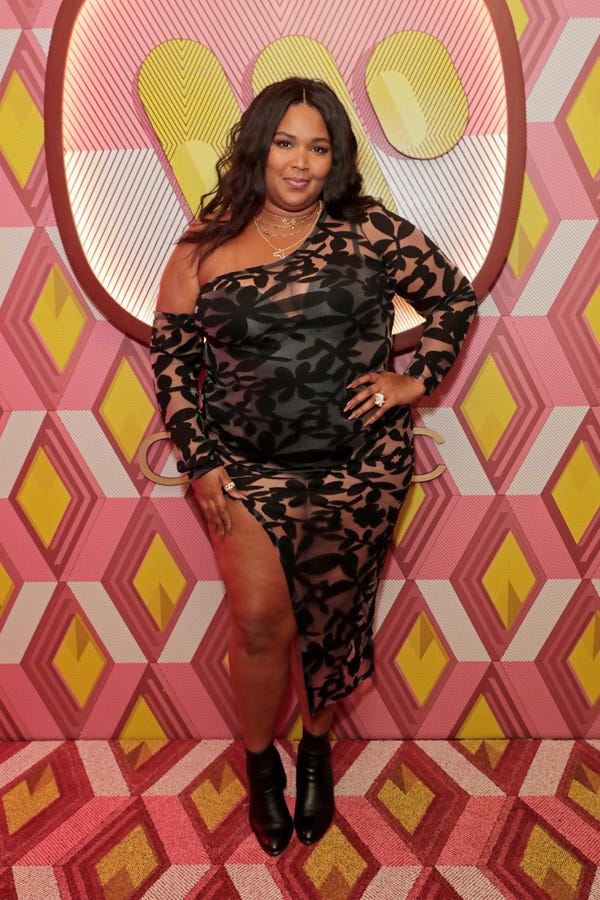 Lizzo wore an asymmetrical see-through dress and black boots for the after-party, where Harry Styles, Ellie Goulding, and Naomi Campbell were also in attendance. 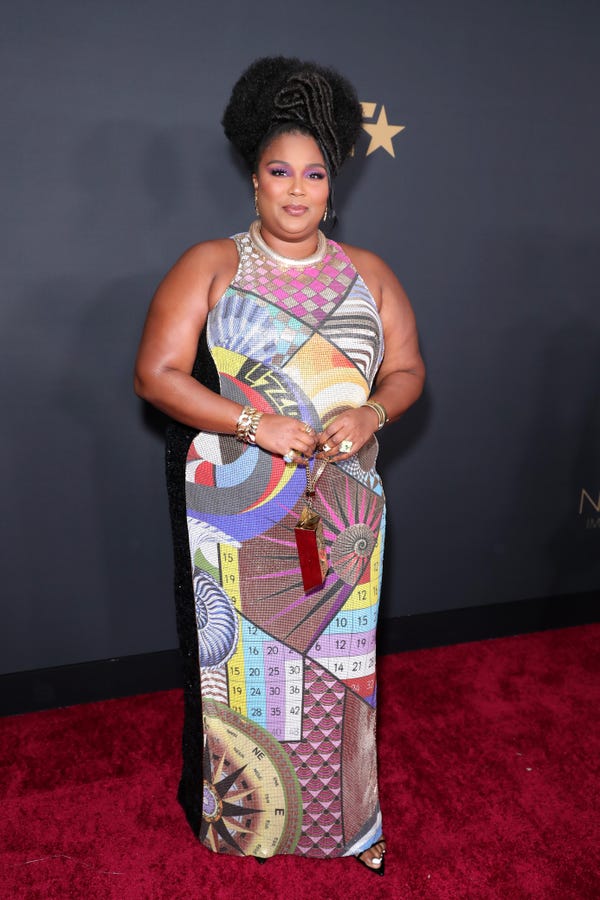 Lizzo was awarded the entertainer of the year award that night. Schild wrote that the backside of the dress had Lizzo's name in black text.

In September, Lizzo wore a brown fishnet top covered in sparkles while she danced on Instagram.

Insider reporter Celia Fernandez wrote that Lizzo was wearing a Brassybra and tape under the fishnet top. 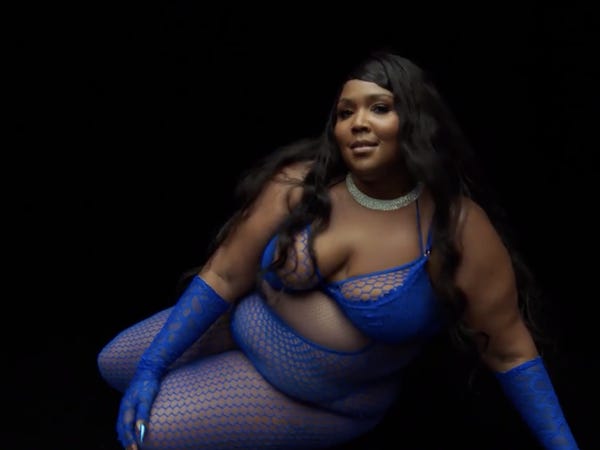 Lizzo also shared a quick preview on her Instagram and wrote, "just when you thought I couldn't love myself any more." Dressed in her blue outfit, she's seen kissing her reflection in the mirror.

Later in the month, at the Billboard Music Awards, Lizzo wore a custom Christian Siriano black dress with "vote" printed all over it in bold white font. 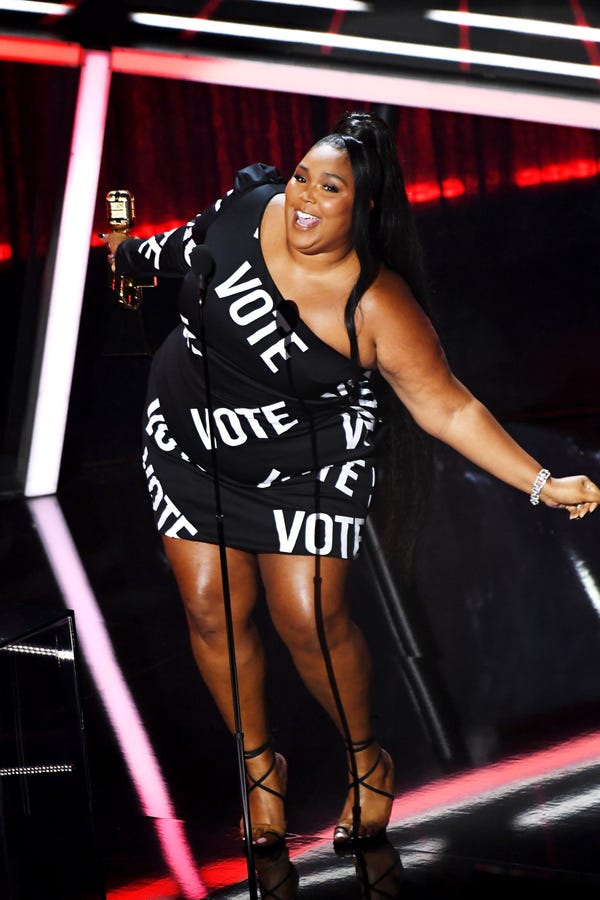 Christian Siriano, the designer, wrote on Instagram that it was "an honor to create [the dress] for this unbelievable and beautiful women [sic] tonight."

The 2020 US presidential election was a few weeks away at that point. Lizzo also had "vote" inscribed on one of her fingernails.

Around the same time, she posted a photo on Instagram recreating the "Uncle Sam" poster from 1917 which was used in recruiting efforts by the US Army. The caption of the post encouraged people to vote.

On November 3, election day, Lizzo wore an American flag jumpsuit with a twist — half the jumpsuit was missing.

Lizzo's stylist, Mark Monroe, told Fernandez that "the portion of the jumpsuit printed with the American flag is meant to represent the percentage of people who didn't vote in the previous presidential election."

Fernandez wrote that only about half of those eligible to vote in 2016 filled out a ballot.

"We the people, ALL the people, deserve it. Today's the last day to vote. Stay in line, stay determined and thank YOU for voting," Lizzo wrote in the caption to the post.

In late October, Lizzo had also styled her hair for an Instagram post to say 40% to draw attention to the percentage of the US public who didn't vote in 2016.

She also got political on her grid with a Halloween costume of the fly that landed on Vice President Mike Pence's head during the vice presidential debate.