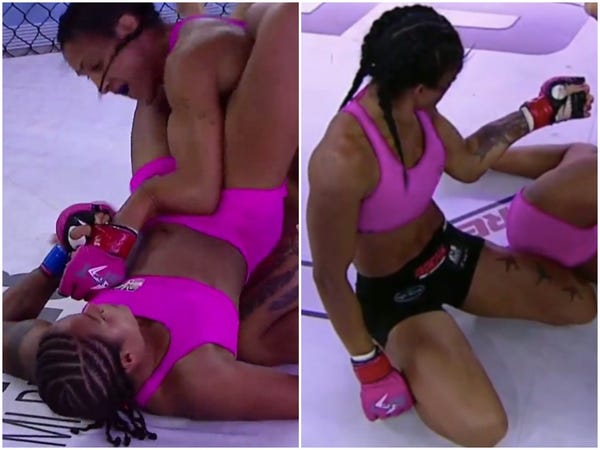 A 43-year-old suffered the worst loss of her entire career when she fractured her arm in the first round of a mixed martial arts match.

It went down at the all-women Standout Fighting Tournament 22 show in Sao Paulo in Brazil which featured four fights on Friday, October 31.

However, it ended horribly midway through the opening round when Rocha had to withdraw from the competition while awkwardly dangling her fractured arm in the air.

Silva and Rocha exchanged submission attempts but, during an armbar, Rocha's forearm seemed to snap.

Perhaps fueled by the adrenaline a fighter has in the midst of battle, Rocha appeared to want to continue fighting but the referee intervened so she could receive medical attention on the injury.

Rocha's pro MMA record fell to 12 wins (six knockouts, one submission, and five decisions) against eight losses with the defeat.

Related posts:
TV and Movies
Coronation Street: Is Steve McDonald a twin?
The truth about Josh O’Connor’s girlfriend
The Big Bang Theory fans notice amazing connection between Mayim Bialik and Amy
'Little House on the Prairie': This Cast Member 'Disliked' Star Michael Landon 'On Sight'
Recent Posts
This website uses cookies to improve your user experience and to provide you with advertisements that are relevant to your interests. By continuing to browse the site you are agreeing to our use of cookies.Ok