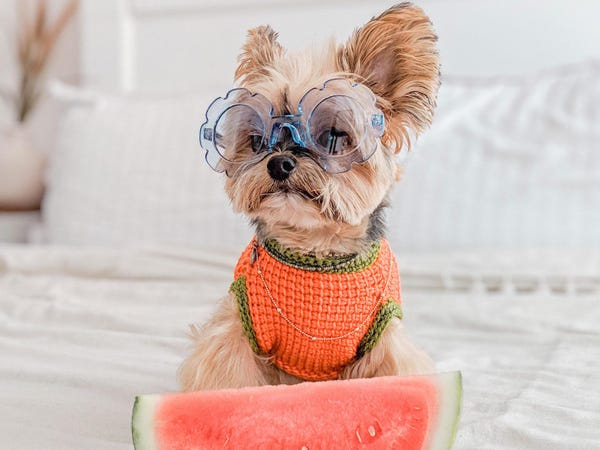 After moving to Los Angeles, California, from Nebraska in 2013, Christine Hsu found herself missing her dog back home. But then she met Ducky.

Speaking to Insider, the lifestyle blogger said she was looking on Craigslist for any dogs in need of a new home and eventually came across the adorable Yorkshire Terrier pup, who she named after a character from "The Land Before Time."

Approximately 7.5 years later, the two have become inseparable — and Ducky has even become internet famous. Across TikTok and Instagram, the dog has more than 1 million followers who look forward to seeing him dressed as different celebrities, influencers, and movie characters.

A recent video where he transforms into Harry Styles from the "Watermelon Sugar" music video has been viewed more than 2.6 million times at the time of writing.

Hsu is no stranger to the internet. She co-founded a digital-marketing group called The 00 Agency, and also works as a lifestyle blogger with more than 244,000 followers on Instagram.

Bare face & flush cheeks from carrying @duckytheyorkie all the way up (he literally didn’t walk a step) 🐥⛰ Sunrise hike and we were the first ones up! I always recommend starting your hike at least 30 min before the sun comes up. You beat the heat and the crowds. We went on a weekend too! #kkarmaloveonthego

As a result, Hsu always wanted to create social-media accounts for Ducky. Around his fourth birthday, she began his Instagram page.

"We celebrated the kickoff with a pup patty from In-N-Out!" Hsu told Insider.

The series has now transformed entirely, with Ducky dressing as characters like Stitch, Donald Duck, and Mickey Mouse.

The blogger has a variety of outfits and accessories ready for Ducky to wear, though she sometimes has to "order items online, and even get them custom-made."

"I go through all of the comments and see which ideas pop out or are mentioned the most," Hsu said. "Then I scour the web to find matching items that Ducky can wear, which isn't a lot because he's pretty small."

Less than a week ago, Hsu transformed Ducky into YouTuber David Dobrik, dressing him in a black hoodie and matching Los Angeles Dodgers hat. She even gave him a toy car as a nod to Dobrik's signature Tesla giveaways.

In response to their video, Dobrik responded: "Oh my god what a cutie."

Hsu also dressed Ducky as Willy Wonka, which garnered a seal of approval from TikTok's own Willy-Wonka impersonator — who has 13.2 million followers on the platform. He wrote: "SO CUUUTE 🥰."

"It's super fun to see their reactions, and it would definitely be a dream to collaborate with them," Hsu said of the YouTubers and TikTok stars who have reacted to her videos. "We look up to these TikTokers and all the creative content they put out."

According to Hsu, it "only takes a couple of minutes" to film Ducky wearing each outfit. His patience has shocked many of his fans, who often comment on Ducky's willingness to participate underneath his videos.

While his talent could be attributed to his breed — which Hsu says is Yorkshire Terrier, though "likely mixed with Maltese and maybe another" — he's also just "a fan of the camera."

"He's never shied away from a good photo op," Hsu said. "I swear he knows when it's photo or video time because he's always on his best behavior."

Luckily for fans, Hsu said she has big plans for Ducky's future outfits. She's currently putting together a look inspired by Jimin of BTS, and is also considering a Billie Eilish transformation.