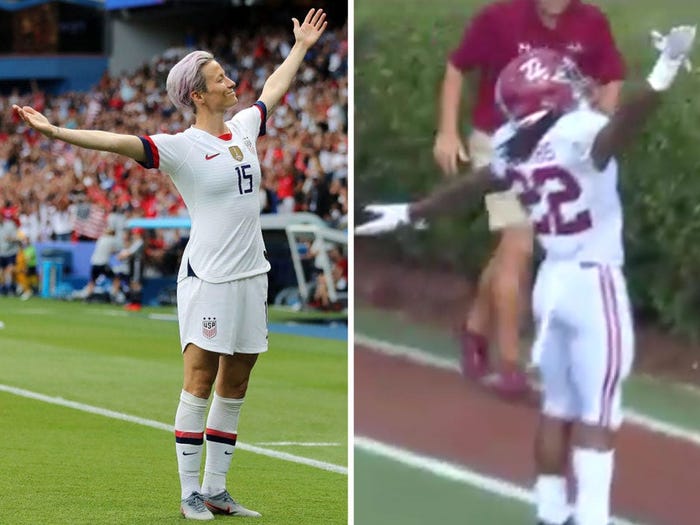 Alabama star running back Najee Harris has no qualms about expressing his admiration for a certain 5-foot-6, pink-haired soccer player even though some may see it as unusual.

The Megan he was referring to, of course, is USWNT superstar Megan Rapinoe. The Crimson Tide senior is widely expected to be a top pick in the 2021 NFL Draft and unabashedly gushed about the 2019 World Cup golden boot and golden ball winner during a Rose Bowl press conference on Tuesday.

"Me, as a male, I guess you could say maybe not too many males would say they look up to a woman nowadays," Harris said. "But I really look up to her just for what she does outside of sports."

"Really, all the stuff she stands up for, like she's a feminist and how women in the world get treated unfairly and how they get paid different than men — she really stands up for all that," he added. "I like how she does that.".

Currently a top-three rusher among all FBS players, Harris has been on the record as a Rapinoe fan ever since he borrowed her iconic World Cup pose while celebrating an epic touchdown against South Carolina last season. The 6-foot-2, 229-pound Martinez, California, native plowed over one defender and hurdled a second before streaking into the endzone, flipping the football into the air, and stretching his arms out wide à la Rapinoe.

Following his two-touchdown, 123-yard performance on the day, Harris simply said: "Yeah, yeah, yeah, shout out to her" to confirm that the celebration was a nod to Rapinoe's epic pose after she scored against France during the 2019 World Cup. But more than a year later, ahead of what could be his final game wearing red and white, Harris went much further in expounding on his veneration for the USWNT and OL Reign captain.

"Obviously, the social injustice that happens, she plays a part in all that," Harris said Tuesday. "And for her to be a woman and saying all that stuff, it can be scary for her for being a woman in what they would say is a man's world."

"Her just playing a part, standing up, not listening to all the naysayers out there, and just standing up for what she believes in is motivating," he added. "It's inspirational."

Shortly after that, Rapinoe caught wind of Harris' kind words and responded with an emoji-filled expression of gratitude on Twitter.

It's safe to say Rapinoe will be pulling for Harris and top-ranked Alabama as they take on the No. 4 Fighting Irish on New Year's Day. Should the undefeated Crimson Tide take down Notre Dame in Friday's Rose Bowl, they'll advance to their fifth College Football Playoff title game in six years. Harris will have a chance to secure a second national championship with Alabama to cap off his standout career in Tuscaloosa.