ANGRY mums have claimed Aldi’s award-winning nappies have been changed making them smaller and less absorbent.

A mum of twins posted on the Aldi UK shoppers Facebook page to raise her suspicions the product had been altered last week after her daughter’s nappy leaked. 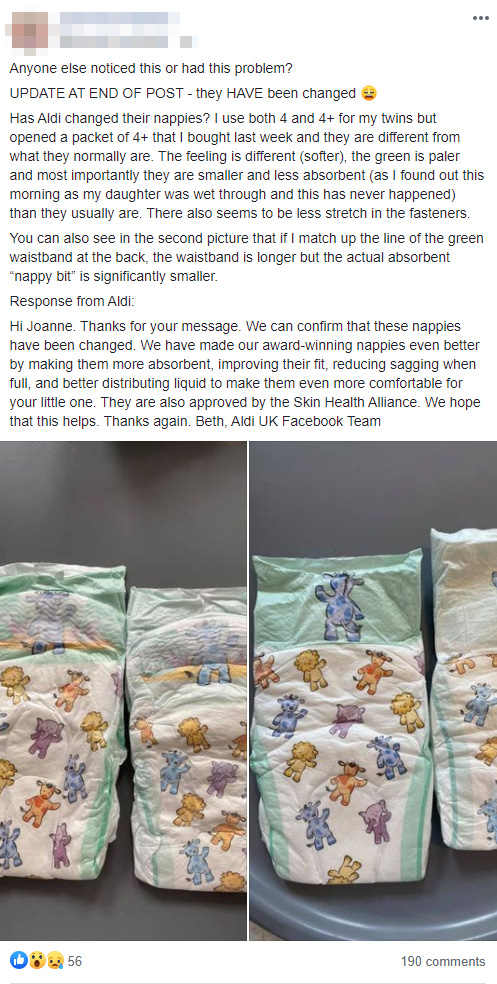 She then compared the new nappies with an older packet and noticed several changes.

She wrote: “I use both 4 and 4+ for my twins but opened a packet of 4+ that I bought last week and they are different from what they normally are.

“The feeling is different (softer), the green is paler and most importantly they are smaller and less absorbent (as I found out this morning as my daughter was wet through and this has never happened) than they usually are.

“There also seems to be less stretch in the fasteners.”

She added: “You can also see in the second picture that if I match up the line of the green waistband at the back, the waistband is longer but the actual absorbent ‘nappy bit’ is significantly smaller.”

She contacted Aldi and claims they confirmed the products she had purchased had been recently changed.

An Aldi spokesperson said: “As the UK’s largest own-label nappy brand, our customers buy over a billion award-winning Mamia nappies each year.

“We made some improvements to our nappies last year, including improving absorbency and ensuring a more even distribution of fluid to give a better fit and reduce sagging.

The post has attracted comments from scores of other parents who have noticed the same issues across different sized nappies.

One mum replied: “I’ve used Aldi nappies on my daughter since birth never had any problem until about  1 month ago she was soaking through . I’ve moved onto Tesco Fred and Flo nappies.”

Another said: “I also wondered the same when I moved from one area to a complete different county. I noticed they were suddenly rubbish. The nappy insides kept ripping open too so all the bits were everywhere all the time. Changed to Tesco/Asda own now and love them. No issues.”

A third said: “Yes also finding the same problems with size 6+. I have emailed them.

“It seems loads of people are having problems with all the sizes so I'm guessing they have changed how they make them.”

Aldi’s own brand nappies are part of the store’s Mamia baby and toddler range .

In 2019 the product won Gold at the Mother and Baby awards.

The Sun picked it as the best supermarket nappy the same year.

The product promises 2x faster absorbency and up to 12 hours day and night protection and come in sizes 1-7.

According to Which, Aldi nappies are some of the best value on the market working out between 5p and 11p per nappy depending on size.

Other supermarkets have their own brand nappies.

Tesco have the Fred and Flo baby range, Sainsbury’s the Little Ones range, and Lidl the Lupilu range.

Mums are raving about kids’ plates from Aldi featuring Hey Duggee and Peppa Pig, claiming they’re ideal for getting fussy kids to eat their dinner.

Plus mums are raving about B&Q’s £57 room dividers which instantly give warring kids their own space.

And this woman transforms her bland, boring kitchen into a bright and modern space for just £90.