Bassett has been on the bench for three out of her past four games for the Giants, as Fitzgerald opts for a starting front-court pair of Keira Austin and Jo Harten that has proved adept at converting the controversial new super shot, netting 71, for 142 points, across nine rounds. 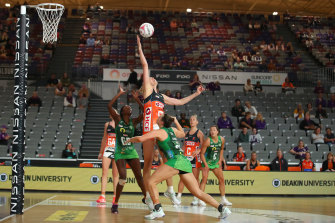 "There is a perception that she can't shoot from there but she actually can," Alexander said. "I've watched plenty of her shooting sessions I can tell you … she can shoot from there it's just that she doesn't very often."

Alexander was a vocal opponent of the new rules hidden when the super shot was announced in July. Along with the controversial two-point goal, rolling substitutions were also brought in. Neither rule is used at international level.

For Alexander, the real concern now lies in how the introduction of the super shot could affect Bassett's confidence, which would have major implications for the Diamonds.

"This is a great mental challenge for her and she knows that and she is trying very hard to embrace that challenge for herself," Alexander said. "I'm trying to assist her as much as I can from the outside." 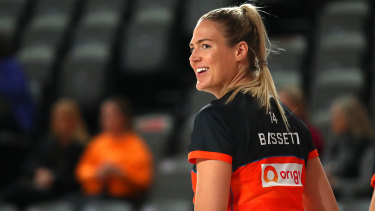 Caitlin Bassett has spent a lot of time on the bench in recent matches.Credit:Getty

Alexander, who was axed in February after Diamonds defeats in the World Cup last July and the 2018 Commonwealth Games, said Netball Australia's decision to select a Super Netball coach would result in "layers and layers" of conflicting interests, mainly around selection.

"Our athletes, who are training their little butts off deserve to know they are going to be judged on their performances and on their merits, certainly not who is the favourite," Alexander said. "It is really, really difficult."

Alexander said Marinkovich might also suffer from fatigue doing both jobs, especially after such a challenging season.

"This will be tested – there is no other way to say it," she said. "It's going to be tough and I'm not saying she can't do it. They [Netball Australia] chose Stacey so they know what they are getting themselves into."

Both Bassett and will Marinkovich will be put to the test towards the end of 2020 during the Constellation Cup between the Diamonds and New Zealand Silver Ferns.