Here are your FOX Business Flash top headlines for March 31.

The fierce battle to unionize two major Amazon warehouses – one in Alabama and the other in the New York City borough of Staten Island – is winding down Thursday as labor board officials begin the final vote count.

The National Labor Relations Board is slated to start counting votes from workers at the Bessemer, Alabama, facility and the JFK8 facility in Staten Island by 1 p.m. ET on Thursday. Both vote counts will kick off simultaneously. However, each count could take several hours, according to labor board officials.

If either warehouse votes in favor of a union, it will mark a major milestone for the nation’s second-largest private employer, which has successfully avoided unions since it was founded in 1994.

For the Bessemer facility, this will be the second time that workers have voted on whether to unionize.

In November, labor board officials ordered a redo after determining that Amazon unfairly influenced the first election last year. However, during that election, workers overwhelmingly rejected the union, voting 1,798 to 738.

This time, the Retail, Wholesale and Department Store Union, which is still driving the union campaign, is hoping for a different outcome despite the rough voter turnout. For the second election, which kicked off in early February, only 39% of the over 6,100 employees voted, down from 50% in the first election, according to Reuters. 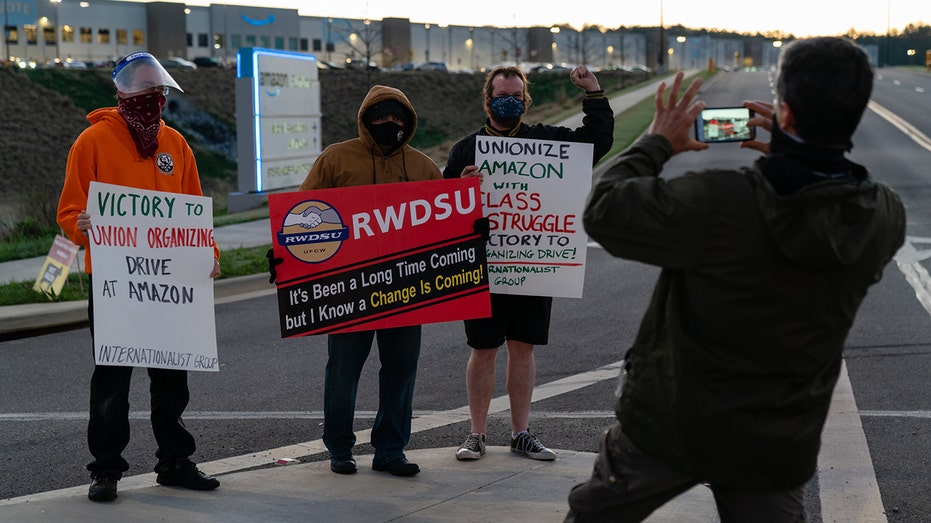 Meanwhile, Amazon workers in the Staten Island warehouse began in-person voting Friday in their first union election. The facility is one of Amazon’s largest in New York City with more than 8,300 employees. It's also one of two warehouses in Staten Island pushing to unionize. The second warehouse, LDJ5, is slated to begin voting at the end of April.

The union drive in New York is being spearheaded by the independent group called Amazon Labor Union. That group is led by a former Amazon employee, Christian Smalls, who claims he was fired after organizing a walkout to protest working conditions at the outset of the coronavirus pandemic.

"This bus stop has been home to me for the past 11 months,"  Smalls tweeted Wednesday. "I’ve done all I’ve could of physically done to get to this point," Smalls wrote. "The rest is up to the people."

In November, labor board officials said a group of Amazon workers in Staten Island originally withdrew its petition to hold a vote to unionize. Amazon previously argued that the turn of events showed that most workers at the Staten Island warehouse don’t want to unionize.

Still, Amazon spokesperson Kelly Nantel told FOX Business on Friday that the company is looking forward to having its "employees’ voices heard."

"Our focus remains on working directly with our team to continue making Amazon a great place to work," Nantel said.

Amazon declined to comment further while the vote count is underway.