A quadruple amputee – who claims she was dumped by her husband of 14 years while fighting for her life – says she’s emerged stronger.

Kim Gilliam Steele, 54, from Georgia developed sepsis after having a toxic reaction to her new medication for Crohn’s disease in 2016.

Doctors had no choice but to amputate Kim’s arms and her legs four months later after they turned black, and to top it all off,  Kim claims her husband of 14 years decided to leave her while she was still recovering.

Kim says she was left with depression but after going to rehab and learning how to live as an amputee, Kim decided to turn her life around by using her experience to help others and create more awareness around sepsis.

‘I feel like I’m living a better life than I was before because my whole mindset has changed and I now feel like I have a purpose,’ she said. 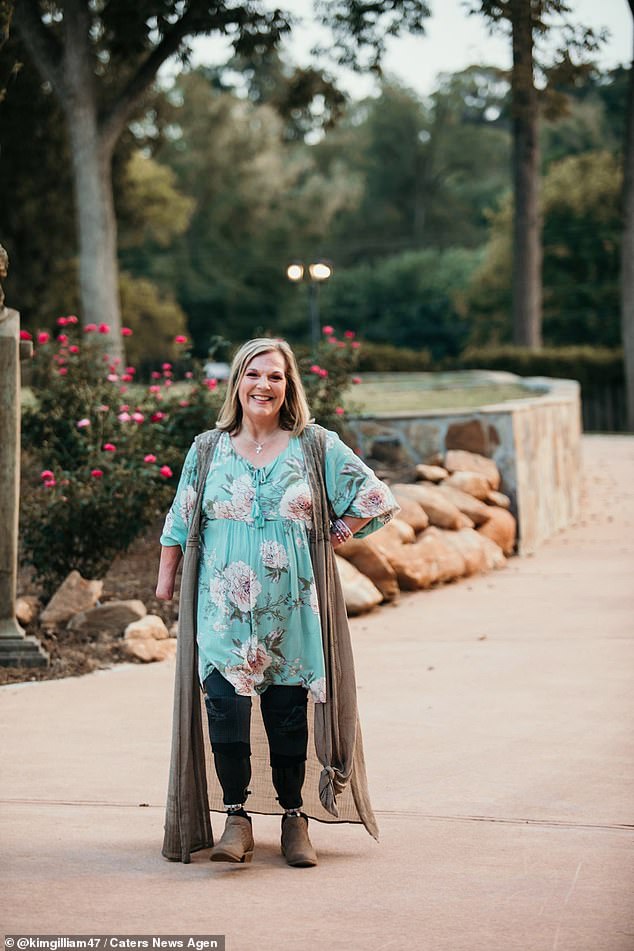 Kim Gilliam Steele, 54, from Georgia developed sepsis after having a toxic reaction to her new medication for Crohn’s disease in 2017. She had all her limbs amputated and spent several months in hospital. Her husband of 14 years left her while she was recovering, leading her to experience depression. But now fully recovered, Kim is trying to be more positive and spread awareness about sepsis 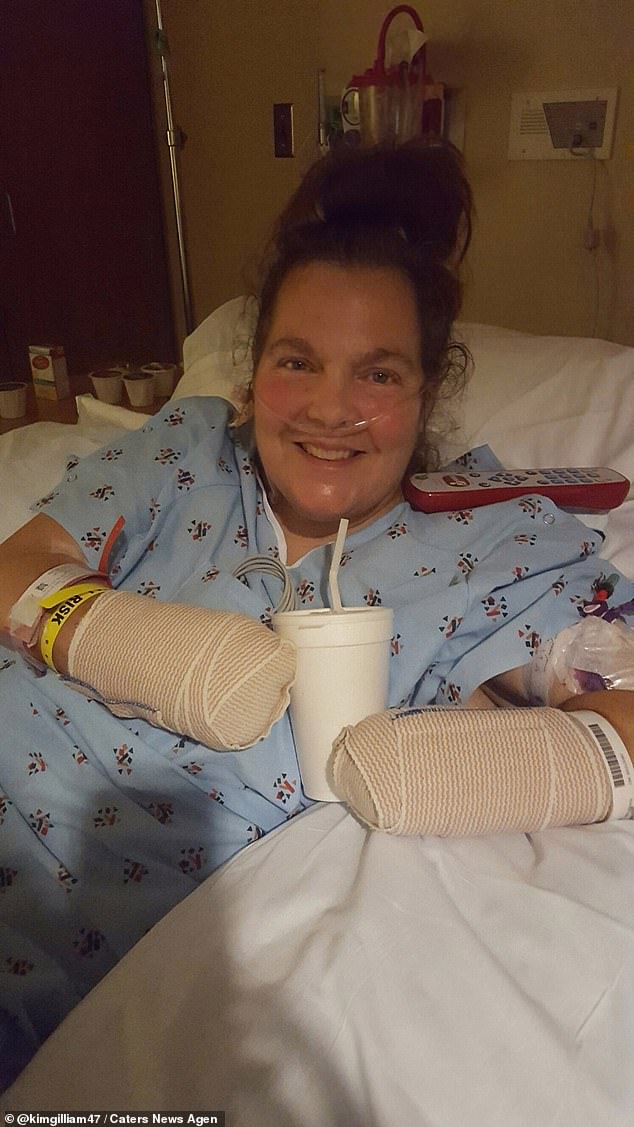 Kim in hospital after her hands were amputated in 2016. She explained she suffered from depression after leaving rehab in 2017

Kim explained: ‘I was devastated when he left me but I knew by the way he was acting that he wasn’t going to stick around.

‘Not only did I have to deal with losing my limbs; I had to accept that I was losing my family as well.

‘I truly believe I would not be where I am today if he would have stayed; I wouldn’t be the strong independent person I am.

‘In 2016 my doctor suggested I try new medication for my Crohn’s disease because he thought it would help but four days in, I suffered from a toxic reaction and went into anaphylactic shock which eventually led to sepsis. 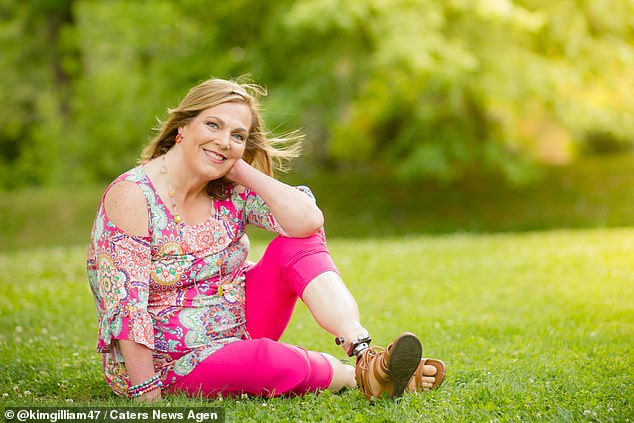 The survivor said she was devastated by her divorce at first, but has now a more positive outlook on life (pictured) 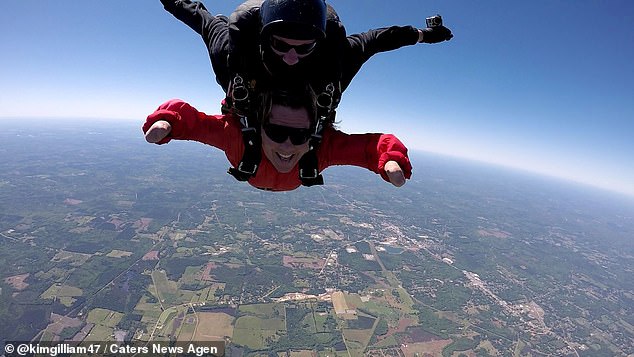 In spite of losing her limbs, Kim is keen to try new experiences and managed to go skydiving after her rehab

What is Crohn’s disease?

Crohn’s disease is an agonising digestive condition that blights the lives of 115,000 people in Britain and as many as 1.6 million in the US.

Eight out of ten patients will need a part of the intestine removed as it becomes so damaged it prevents digestion.

Its cause is still not known and there is currently no cure but some with the condition have considered their diet to be a factor.

However, bacteria is already known to play a major role in causing Crohn’s disease, in addition to genetics and diet.

Conventional treatment is with drugs that suppress the immune system’s production of a protein called TNF, which causes inflammation.

‘Once I came out of the hospital, I had to rely on my family to do everything for me.

‘My life came to a screeching halt and it led me to a very dark place; I had lost my limbs and my husband all in a short amount of time and learning how I was going to live with this was extremely difficult.

‘Rehab was one of the most wonderful places I could have gone to; it made me realize that you can still live a productive life after something like this happens and I wanted to use my experience to help others.

‘I have a wheelchair but I also have prosthetic legs that I am able to use everyday.

‘I have been living by myself since April 2017 and am able to look after my three dogs, clean my home, drive a regular vehicle with no special adaptions and I live every day as if it were my last.

‘When you go that close to death, your whole life perspective changes.’

Kim was given a less than nine per cent chance of surviving after being put into a medically induced coma. 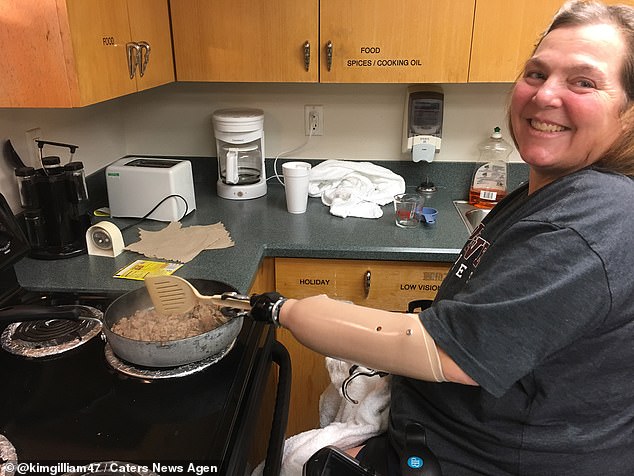 Kim has learned to do several things by herself without her hands, including cooking. She’s been living by herself for three years 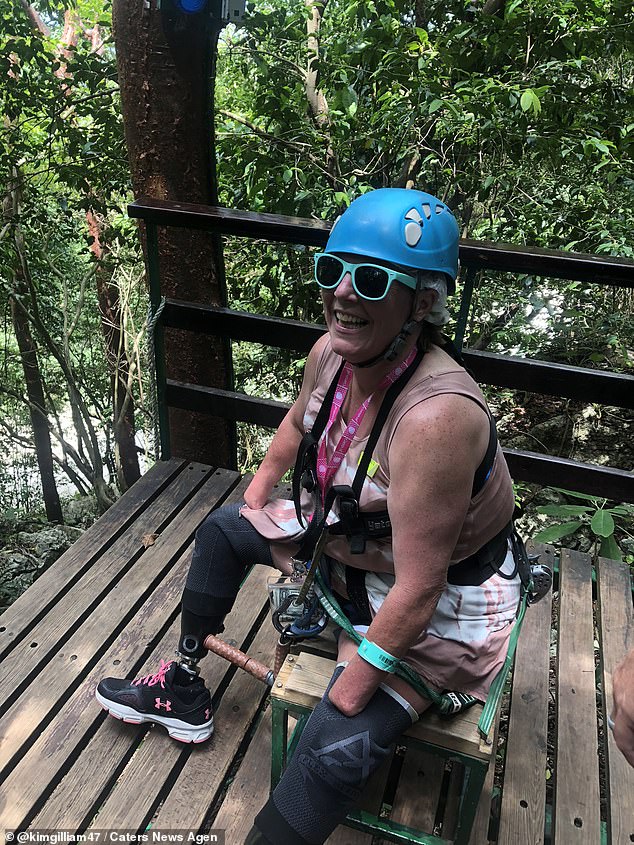 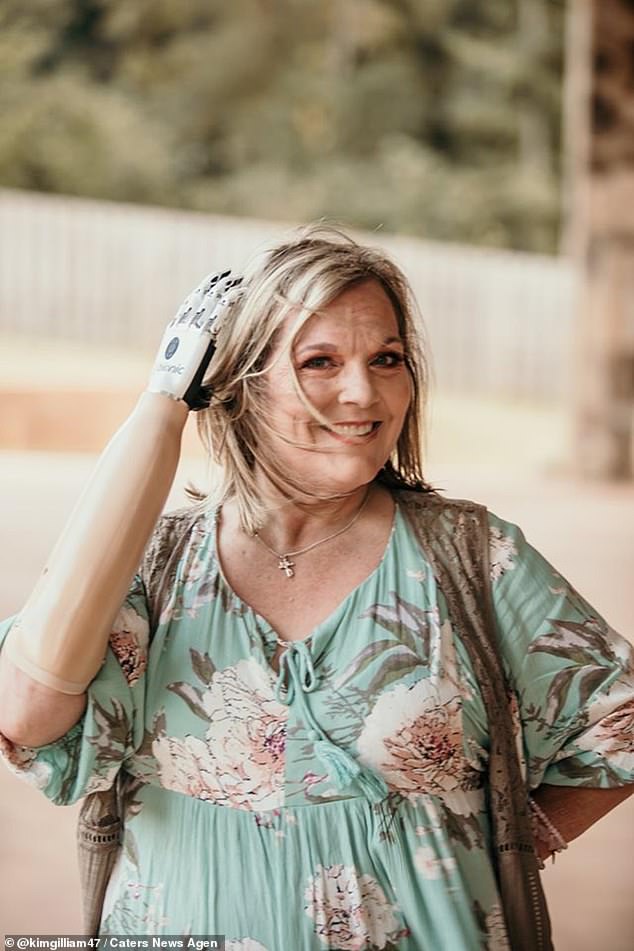 Divorcee Kim said she was okay with herself if she didn’t find love again. And admitted men were less accepting of women with missing limbs 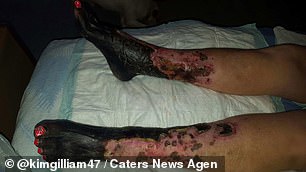 Pictured: Kim’s limbs turned black due to a bad reaction to her medication, which caused sepsis

Kim said: ‘So many people are losing their lives to sepsis everyday and my goal is to try and make hospitals more aware and proactive in their response to sepsis.

‘Losing your limbs is a major change and I want people to know that they can live a productive life if they want to.

‘When I realized what I wanted to do and that I was going to fight, I started working so hard towards that goal and now, my life is good. 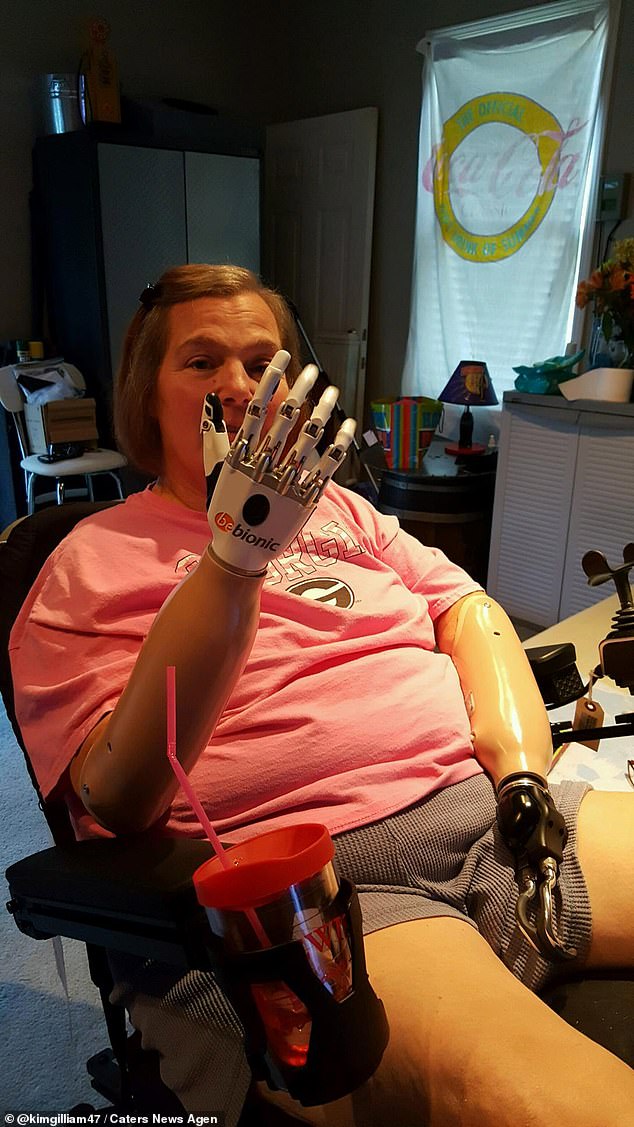 While she learned to manage without her limbs, Kim has both a wheelchair and prosthetic legs and is pictured his trying prosthetic hands on 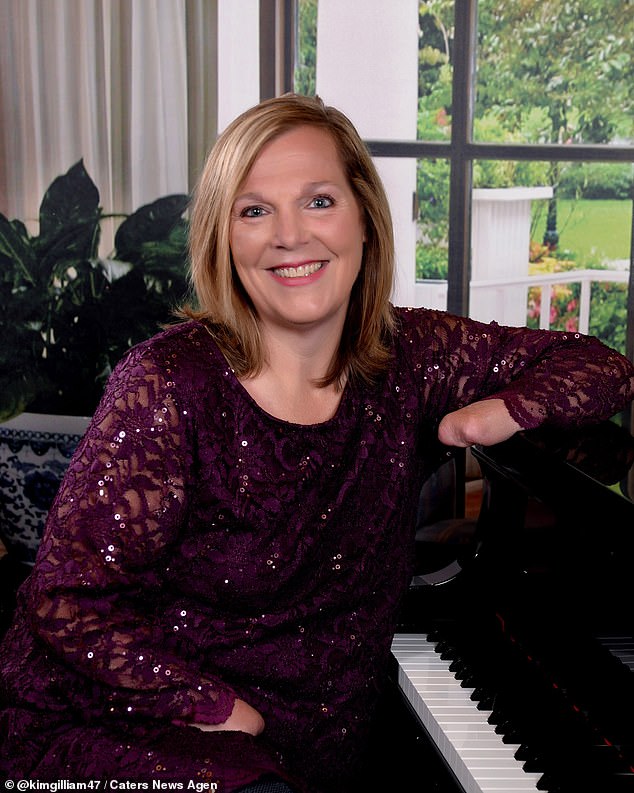 Kim, pictured now, said she wanted other people to know they could lead a productive life without limbs

‘Most amputees need a carer but I’ve pushed myself to where I can live on my own.

‘Ever since this all happened, it has pushed me out of my comfort zone. Two years ago on Easter Sunday I decided to go sky diving.

‘They were hesitant about letting me do it at first but it was the most amazing experience and I feel like I can do anything now.

‘It proves that I am stronger than I ever thought I would be and I want to be an advocate for others and inspire others. 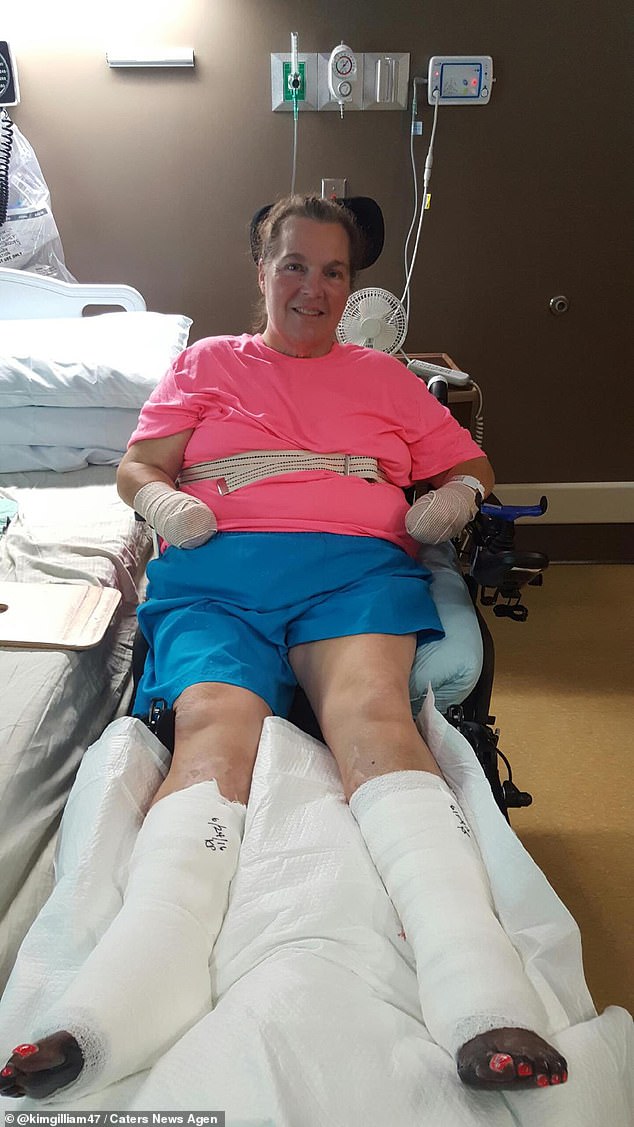 Kim in hospital in 2016 after her hands were amputated, before her legs followed suit. Her skin turned black due to sepsis 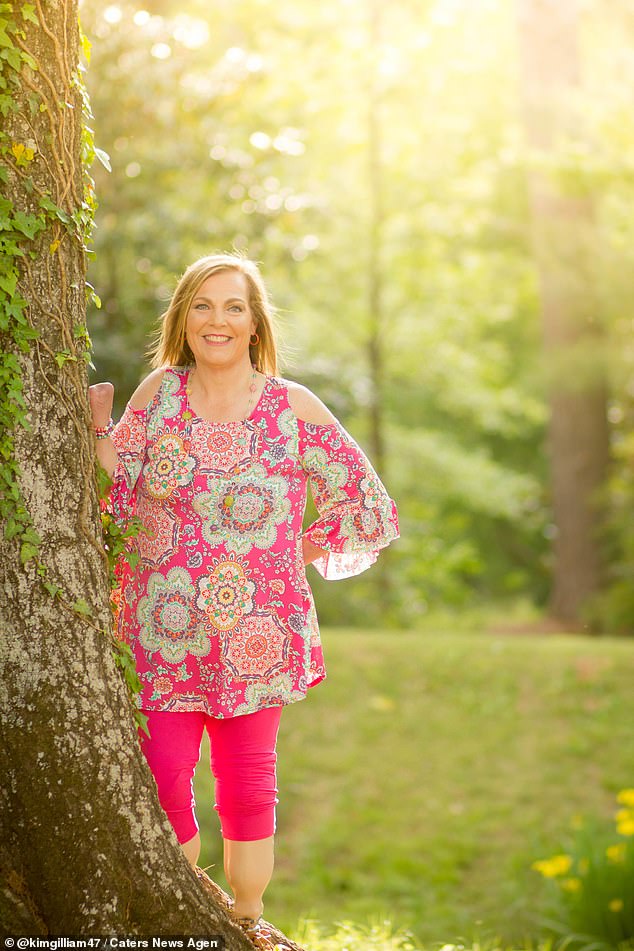 Kim now. She explained she was happy with who she was now and could count on the support of her family 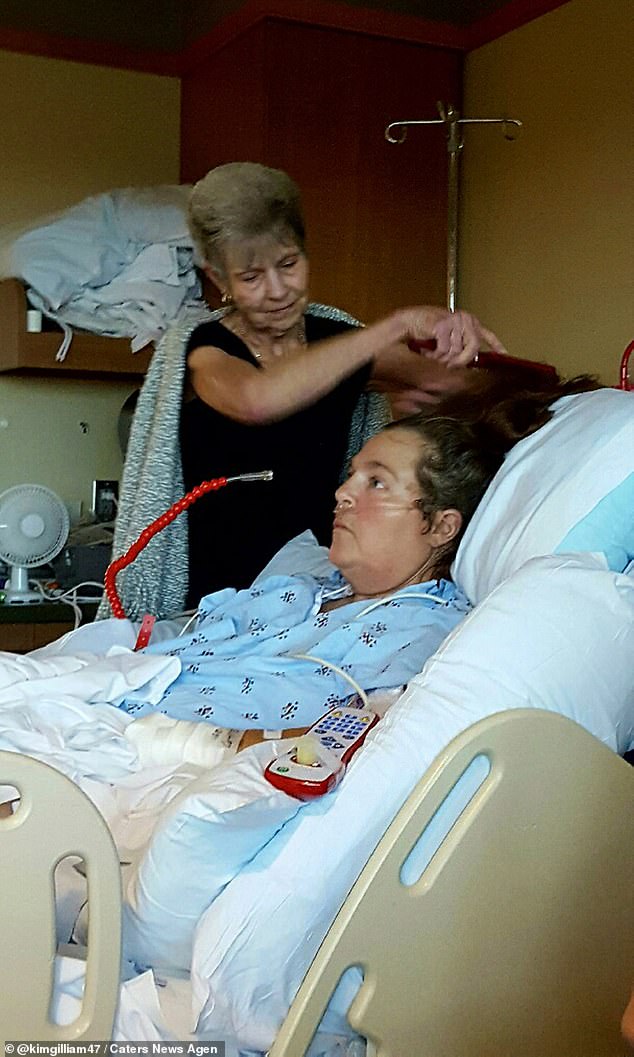 Kim in hospital in 2016 shortly after the life changing operation she went through. She said she was living by herself two months after living hospital and coping vert well

‘My family are always here for me and I have wonderful neighbors but I am doing really well on my own; I came home from hospital in February 2017 and two months later I was living by myself.

‘You need supportive people in your life; I will reach out to people who are going through the same situation and will even go and visit people who need help.

‘I hope to find love again one day but most men aren’t as accepting of women missing their limbs.

‘If I don’t find love again I’m happy being who I am. I want to continue spreading awareness and positivity around the world.’ 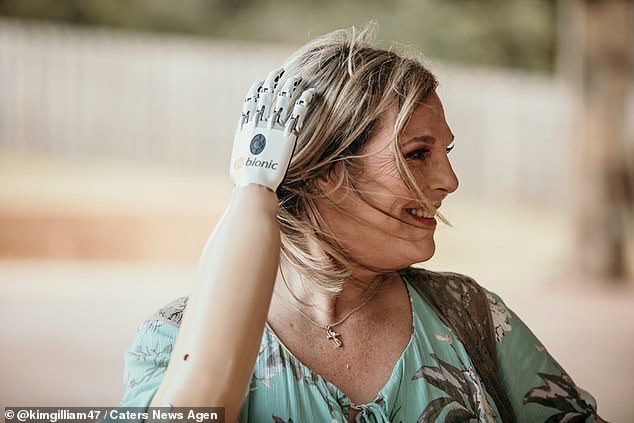 Kim with a bionic hand now. She said most amputees needed a carer to help look after them, but that she was coping without one 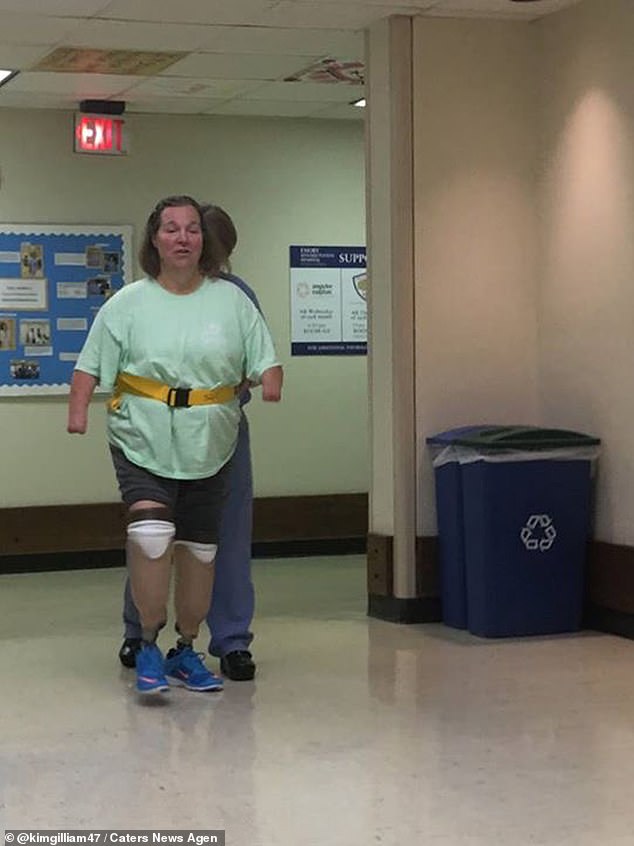 Kim getting used to her new legs at the hospital during her post-op rehab. She also has a wheelchair just in case 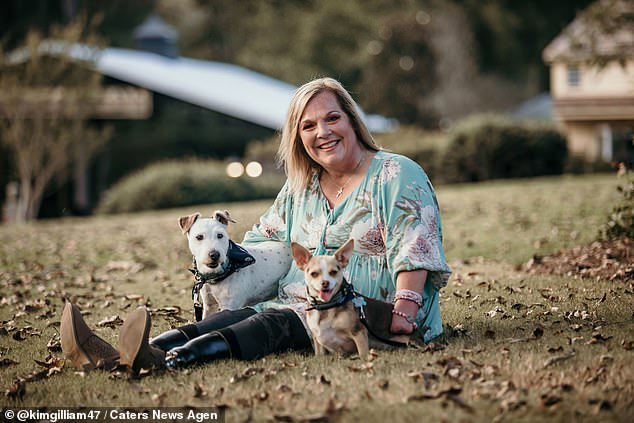 On the grass with two of her three dogs. Kim said she was happy and liked to push herself out of her comfort zone

Sepsis is a life-threatening condition caused when the body releases chemicals to fight an infection.

These chemicals damage the body’s own tissues and organs and can lead to shock, organ failure and death.

Organ failure and death are more likely if sepsis is not recognized early and treated immediately.

Sepsis infects an estimated 55,000 Australians each year, killing between 5,000 and 9,000 making it more than four times deadlier than the road toll.

The symptoms can look like gastro or flu and can become deadly, rapidly.

The six major signs of something potentially deadly can be identified by the acronym ‘SEPSIS’:

Children may also show convulsions or fits, and a rash that doesn’t fade when you press it – and more than 40 per cent of cases occur in children under five.

Anyone who develops these symptoms should seek medical help urgently — and ask doctors: ‘Could this be sepsis?’

Sepsis is a leading cause of avoidable death killing about 10,000 Australians each year

The early symptoms of sepsis can be easily confused with more mild conditions, making it difficult to diagnose.

A high temperature (fever), chills and shivering, a fast heartbeat and rapid breathing are also indicators.

A patient can rapidly deteriorate if sepsis is missed early on, so quick diagnosis and treatment is vital – yet this rarely happens.

In the early stages, sepsis can be mistaken for a chest infection, flu or upset stomach.

It is most common and dangerous in older adults, pregnant women, children younger than one, people with chronic conditions or those who have weakened immune systems.