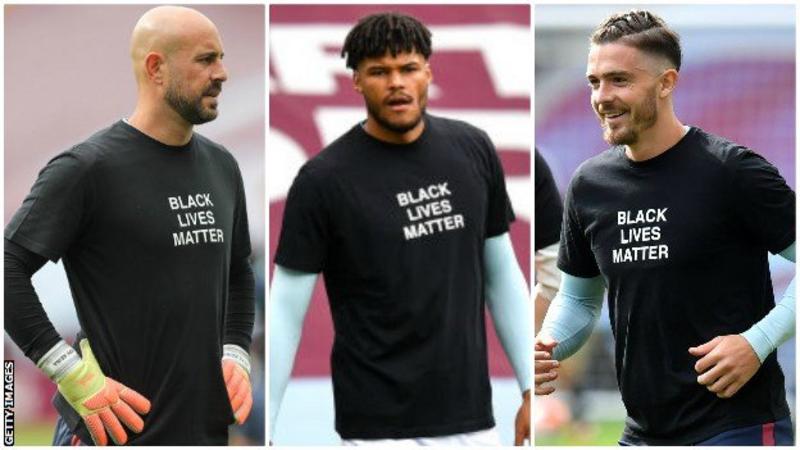 Aston Villa and Sheffield United’s players took a knee in support of the Black Lives Matter movement immediately following the whistle to kick-off the first Premier League game of the restarted season.

Referee Michael Oliver blew the whistle before also taking a knee on the pitch.

Villa’s players and staff wore black shirts with the words ‘Black Lives Matter’ on in the warm-up.

A black banner was also on display at Villa Park during the match.

A joint statement issued by both clubs shortly after kick-off said they “were proud to stand in solidarity” with the actions of their players and coaching staff in “expressing our collective support for the Black Lives Matter movement.”

Both clubs also said they hoped that the act of ‘taking a knee’ will “send a strong message of unity and amplify the many messages of support from Premier League players and the wider football family”.

The Premier League announced their support for the movement for racial equality following the death of George Floyd in the United States which sparked protests worldwide.

Floyd, a 46-year-old unarmed black man, died as a white police officer held a knee on his neck for nearly nine minutes on 25 May.

Players’ names will be replaced on the back of their shirts with the words ‘Black Lives Matter’ in all of the first 12 matches of the restarted Premier League season.

A ‘Black Lives Matter’ badge will also feature on all playing shirts for the rest of the season. 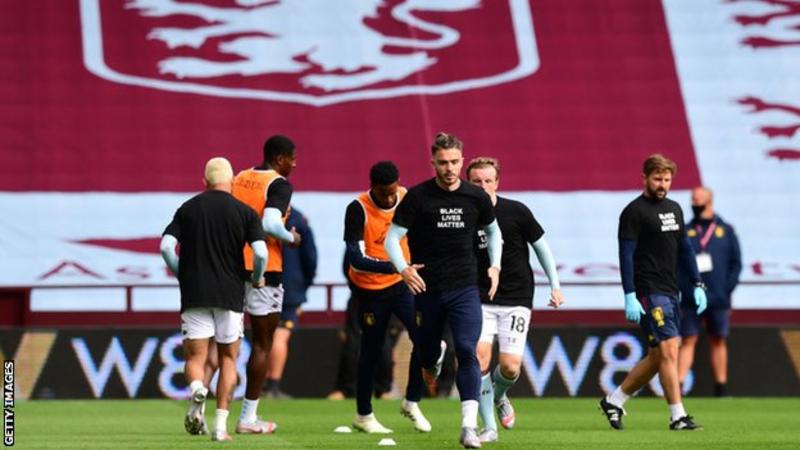 ‘That touched my heart’

Former Crystal Palace striker Clinton Morrison said the moment players took a knee in the opening game of the restart was “special”.

He told BBC Radio 5 Live: “That was special, that touched my heart. I didn’t expect that. You could see it was planned. It was magnificent. Credit to both sets of players and staff.”

Former Arsenal and England striker Ian Wright said Premier League players wearing ‘Black Lives Matter’ on their shirts shows the league wants to be on the right side of history.

“What the Premier League have done, is to give them the power,” said Wright, who was sent racist abuse on social media last month.

Research by UK Sport and Sport England last year found that black, Asian and minority ethnic (BAME) people accounted for just 5.2% of board members across the 130 sport organisations they fund, including the Football Association.

According to the 2011 Census, around 13% of the population of England and Wales is from a BAME background.