The AstraZeneca vaccine has been granted provisional approval by the medical regulator, paving the way for all Australians to receive a coronavirus vaccine by the end of the year.

The Therapeutic Goods Administration has approved it for adults aged 18 and over, but said the decision to immunise those aged over 65 should be made on a case-by-case basis. 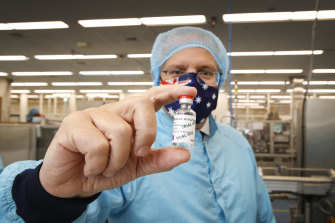 Prime Minister Scott Morrison at the CSL facility that will make the AstraZeneca vaccine which the TGA cleared for local use.Credit:Getty Images

“Australians can be confident that the TGA’s review process of this vaccine was rigorous and of the highest standard,” the TGA said in a statement.

“The vaccine has met requirements for standards, for safety, quality, and efficacy, and will be provided free to Australians and it means that Australia now has two safe and effective COVID-19 vaccines available,” Mr Morrison said.

“Australia is one of the few countries in the world that can manufacture its own COVID-19 vaccine here by CSL.”

The AstraZeneca vaccine is the second coronavirus vaccine to be approved in Australia.

The Pfizer vaccine gained provisional approval last month, and people will begin receiving those vaccinations from next Monday.

More than 140,000 doses of the Pfizer vaccine arrived on Monday, in a major vaccination milestone announced by Health Minister Greg Hunt. Pfizer is set to ship 20 million doses in total to Australia.

The country will have 53.8 million doses of the AstraZeneca vaccine, with 3.8 million imported from overseas and 50 million manufactured by CSL in Australia. The imported doses will begin arriving in the first week of March, and CSL’s first locally produced vaccines will be available later that month.

Most Australians will get the AstraZeneca vaccine, which Mr Hunt has previously described it as the “ace in the hole” of the nation’s rollout.

Developed by researchers at the University of Oxford and pharmaceutical company AstraZeneca, the vaccine is a “non-replicating viral vector vaccine”. Scientists have taken a virus that usually gives chimpanzees a cold but is harmless to humans, and genetically engineered it to look like SARS-CoV-2, the virus that causes COVID-19, to trigger an immune response.

Unlike the Pfizer vaccine, which requires storage at minus 70 degrees creating a number of logistical challenges for widespread distribution, the AstraZeneca vaccine only needs to be stored at 2 to 8 degrees, as is the case with most vaccines.

Most people will receive their AstraZeneca vaccine in phases 2a and 2b of the rollout at a general practice vaccination hub, their local GP or approved pharmacy.

Earlier this month, CSL told The Sydney Morning Herald and The Age it was confident it could make updated versions of AstraZeneca’s COVID-19 vaccine to cover any virus variants that might arise.