Mr Morrison declared in February the Royal Commission into National Natural Disaster Arrangements would be "focused on practical action that has a direct link to making Australians safer". 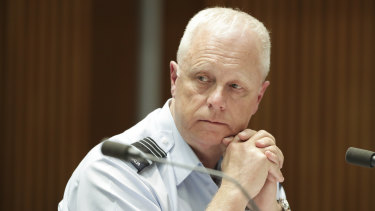 Inquiry chairman Air Chief Marshal Mark Binskin said the commission would release “preliminary observations to share our present perspectives as we approach the final stages of our inquiry”.Credit:Alex Ellinghausen

The commission was handed a tight six-month reporting window "so recommendations can be acted upon before our next bushfire season", Mr Morrison said. While the bushfire season has already begun in Queensland and NSW, the interim report explicitly says it does not contain draft recommendations.

The 24-page "interim observations" report released on Monday instead identifies a long list of research initiatives and policy reforms. A number of "propositions" for comment will be released next week. The commission, which received 1700 submissions and heard evidence from 290 witnesses, is now working with state and federal fire managers.

Inquiry chairman Air Chief Marshal Mark Binskin said the commission would release "preliminary observations to share our present perspectives as we approach the final stages of our inquiry".

It said hundreds of thousands of Australians lived in high-risk areas. Of the 3000 homes destroyed in the past summer, 99 per cent were located in areas identified as bushfire prone, it noted, with 74 per cent built before the introduction of the Australian Standard 3959 for construction in a bushfire-prone area.

The commission is seeking feedback on a national agency to co-ordinate state and federal preparation and response to natural disasters, which would "support the development of skills and expertise in recovery, and foster consistent approaches to recovery".

It also suggested investigation of a national disaster declaration system because currently there was no "clear mechanism to elevate matters to national leaders". Mr Morrison was criticised last summer for being too slow to call out the defence force to assist with bushfires.

National co-ordination is also a priority for disaster warnings and real-time monitoring – such as fire service warning apps – which the commission said "differ in quality and consistency" across the country.

Emergency Management Minister David Littleproud said the "interim observations identify areas that all levels of government, separately and collectively, can work on to improve our preparedness for upcoming disaster season".

The Berejiklian government last week said it would implement all 76 recommendations from the independent NSW Bushfire Inquiry. It backed increased use of satellite technology and co-ordination between jurisdictions to improve alerts and responses to bushfires and noted the need to improve guidance for landholders to conduct fuel-reduction burns, but said existing rules needed to be implemented better rather than new legislation.

The commission said fires cost more than $2 billion in insured losses, $3.6 billion in economic losses to tourism, agriculture and hospitality and $2 billion in health costs.

The commission was due to report by August 31 but due to disruption from COVID-19 that date was extended. Another block of hearings kick off on September 21 with the final report due by October 28.