Steve Lazarides shared the previously-unpublished pictures — that he shot on a traveler site in Deptford, London ― with HuffPost this week following the release of the second book of images he took during his decade as the artist’s right-hand-man. 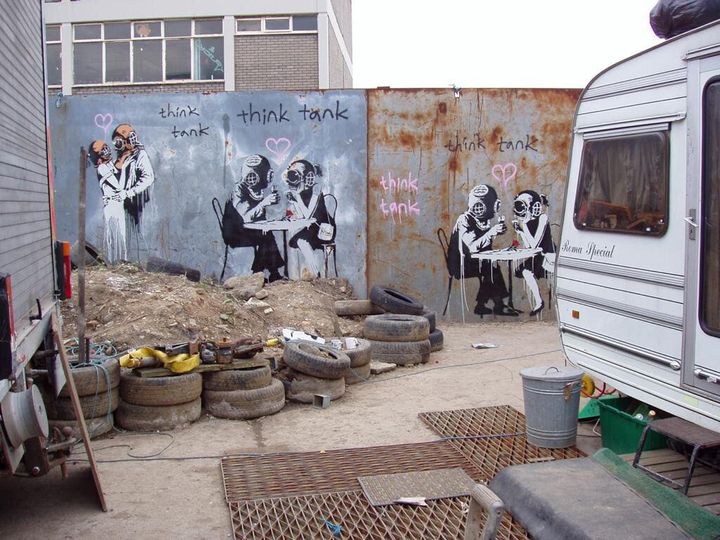 “It was one of my favorite shoots,” recalled Lazarides, who took two sets of images on the day ― one series of closeups for the band, who’d commissioned Banksy for the work, and another of the artwork in its environment.

“I loved the way visually it looked in this site,” he said.

Blur went with this Banksy painting of two divers and used Lazarides’ picture for the album cover: 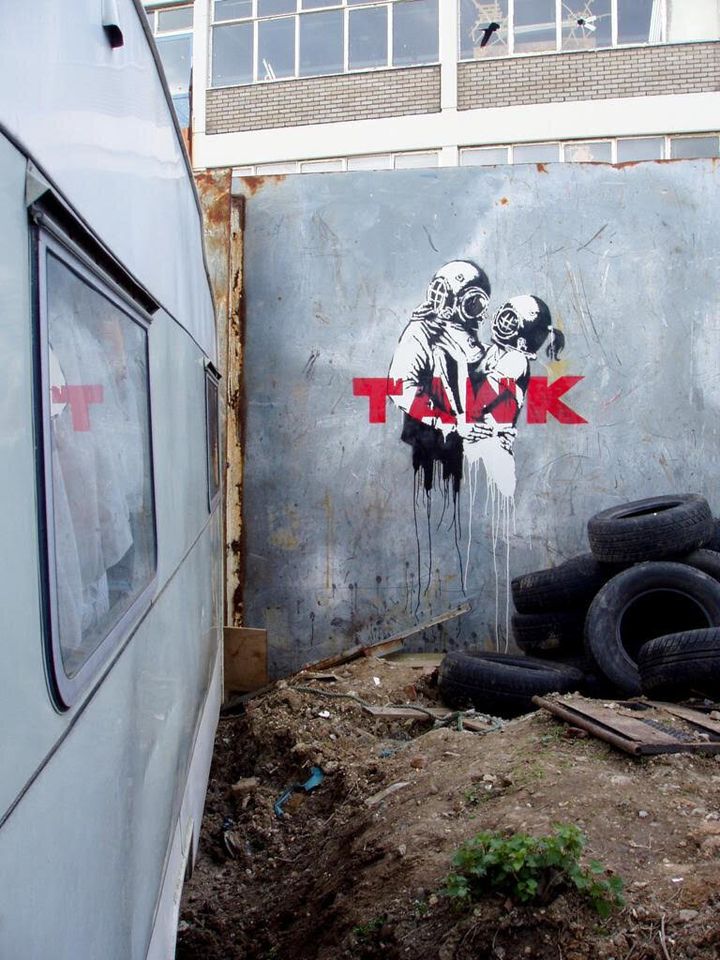 The divers flipped around, without any text: 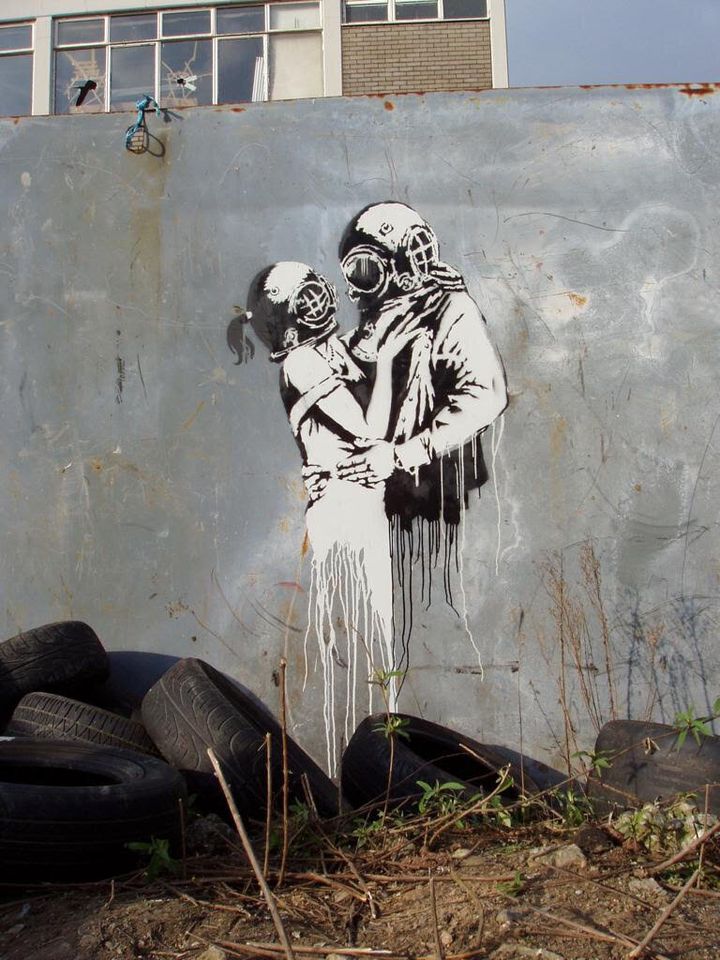 A child diver and a bird: 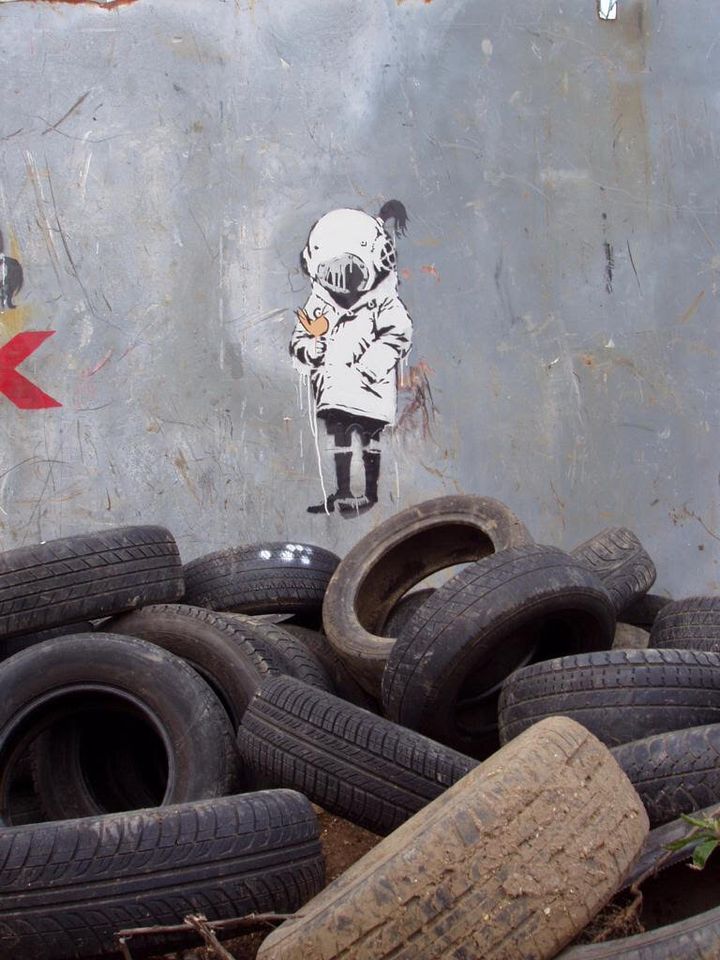 And another child diver appearing to be pooped on by a bird: 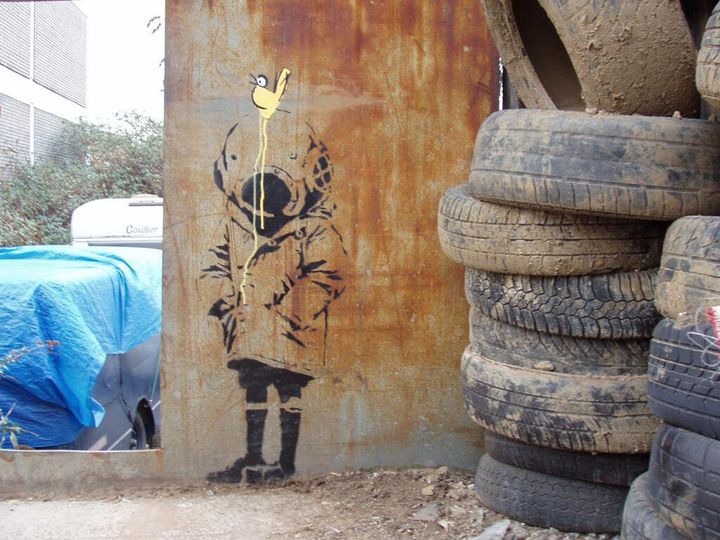 Lazarides also shared this image of Banksy painting a mural in east London, around the same time, that became the basis for the artwork of Blur’s single “Crazy Beat.”

The piece was later accidentally ruined. 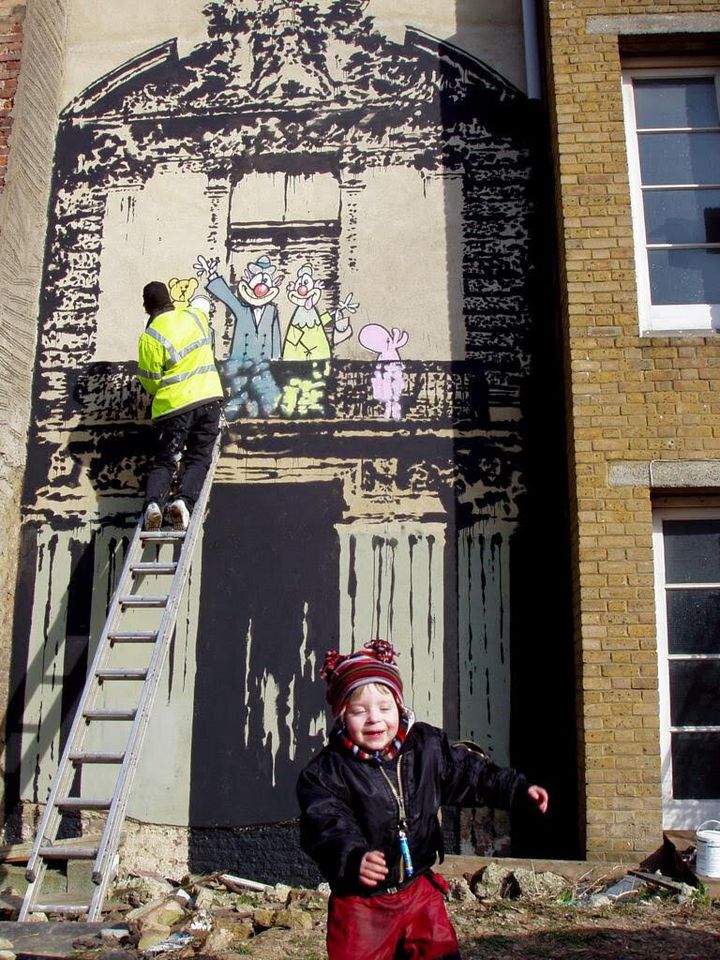 Lazarides said the travelers cut the Blur shoot pieces from the wall. The art was worth around 100,000 British pounds (about $128,000).

“That was a lot of Banksy in one place. Some sold some at auction but I’ve no idea what happened to the rest of it,” he said.

Lazarides last year self-published the first volume of his “Banksy Captured” books, containing hundreds of images he took while working as the artist’s driver, agent, gallerist and dealer from 1997 to 2008.

It featured multiple pictures of the elusive Banksy himself, albeit always unidentifiable as in the picture below, and documented several of his stunts, as told by Lazarides. 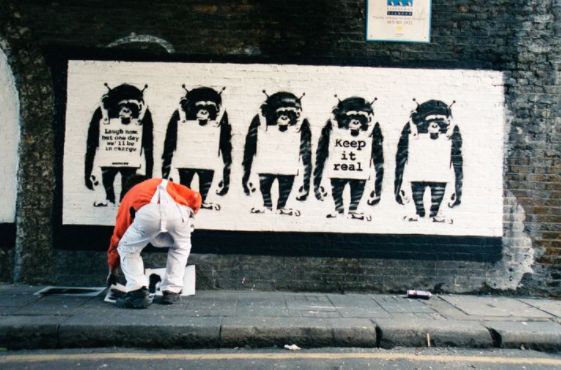 The second installment of the book is in a similar vein, said Lazarides.

It includes never-seen-before images he shot of Banksy’s 2006 “Barely Legal” show in Los Angeles, his infiltration of London’s Natural History Museum and a flash mob he organized for the rock band Jane’s Addiction.

“Some shit I came across I’d just completely forgotten about,” Lazarides admitted.

The 300-page second edition is currently only available in hardback and costs 125 British pounds (around $160). “I know not everyone can afford that for a book but I really wanted to go old school and do a pretty lush hardback edition first,” said Lazarides.

A paperback version is planned for later this year.

“I was a few pictures too over and if anything was going to go, it was this section. It was a wrench,” he explained.

There are no plans for a third volume.

“I’m bored of Banksy now,” Lazarides joked. Instead, he’s now focused on his newly-launched online “LAZ EMPORIUM” store selling what he describes as “objects d’anarchy,” accessible art and pieces from his own collection. 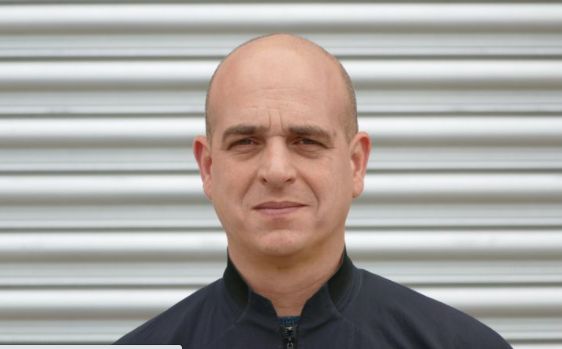 Prints, books, furniture and homewares by Banksy, Damien Hirst, Tracey Emin and 3D (aka Robert Del Naja from Massive Attack, who has been rumored to be the secretive street artist Banksy) are among the items already on sale.

They will be added to with pieces created in Lazarides’ new artistic manufacturing hub near Bristol in southwest England, from where both he and Banksy hail and first met.

Everything artistic is on the table, said Lazarides, who said artists, photographers, writers and other creatives can pitch him ideas as long as they are “fucking cool.”

One of the first projects is “a searing commentary on the state of British cities” as seen in photos taken by inner-city youths, said Lazarides.

“No one can tell us what to do,” he said. “I’m a free spirit, I don’t like being fucking shackled or shuffled into a corner. The only thing that will dictate is the public’s appetite.”