On the day NSW’s COVID case numbers skipped the 500s and soared within reach of Victoria’s darkest days last year, a defiant Gladys Berejiklian declared at her 11am update: “I give the same message every day because some people aren’t hearing the same message.”

Berejiklian’s message on Wednesday was stay at home and don’t break the rules. While that statement may have been a simple one, her instructions are not always so clear. The messaging over the past weeks has become contradictory and chaotic. 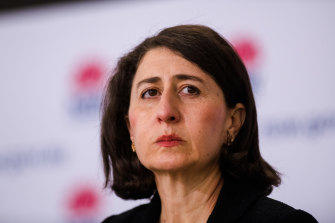 The Premier has oscillated between insisting we can vaccinate our way out of the outbreak to stressing that it will be a combination of harsh lockdown measures and “jabs in arms” that will see life return to normal.

At the same time, as case numbers continue to rise and Berejiklian warns us that September and October are going to be the toughest months of the outbreak, we are also being promised that some restrictions will be eased.

Berejiklian’s threshold is 6 million jabs, which she says NSW is on track to meet by the end of the month, and which is also when the lockdown was initially due to end. As of Wednesday, that figure was 5.3 million.

The Premier wants to give hope to people as they endure lockdown – Greater Sydney is now in its eighth week – as well as encourage as many as possible to get vaccinated. She often speaks about the need for incentives.

Yet despite the promises, Berejiklian will not be drawn on what the freedoms will be. The only expectation is that it will involve vaccinated hairdressers, barbers and beauticians delivering services to vaccinated clients.

Berejiklian has told colleagues that she is particularly keen to give fully vaccinated people outside the 12 local government hotspot areas some freedoms around wellbeing. The long-awaited road map out of lockdown is still a work in progress, but the early incentives for being fully inoculated are likely to be a haircut or leg wax.

There is no doubt some people are flouting the rules, probably knowingly. However, this cannot fully explain the rising case numbers. The biggest sources of infection are workplaces and homes, people just going about their lives, trying to earn a living and look after their families. Not throwing illegal barbecues and engagement parties.

On Saturday, when the government announced extra powers would be given to police, which included restricting Greater Sydney residents to their local government areas or five kilometres from home for exercise or recreation, Berejiklian conceded there was no evidence of outdoor transmission.

The result was a new rule, seemingly not based on health advice or science, that has only served to confuse.

Meanwhile, Chief Health Officer Kerry Chant has steered away from Berejiklian’s promises of easing restrictions. Her response has been that case numbers are too high and must be dramatically reduced before she will turn her mind to anything resembling freedoms.

Chant, whose absence from several consecutive press conferences late last week set off unfounded rumours that she had stepped down or offered her resignation to Berejiklian, fronted the media on Sunday. Usually calm and collected, Chant appeared deeply worried.

Her warning was the most stark of the pandemic: “I cannot describe my concern level if we do not drive these cases down.” If she is considering advising that restrictions be eased, her language suggested otherwise.

But on Wednesday, when case numbers hit a shock high of 633, Berejiklian did not back away. Asked whether it was now time to stop promising that some restrictions could be lifted, she responded: No.

“The high vaccination rate gives us the opportunities to think about what we can do to support people that are completely vaccinated during the difficult months of September and October,” she said.

Berejiklian says Chant will provide advice on what the government can do once it hits its 6 million jab target.

The Premier is reluctant to stray from that promise despite the outbreak showing no signs of slowing. Meanwhile, Chant has not publicly shared Berejiklian’s optimism around the threshold. This suggests politics is increasingly creeping in to the government’s pandemic response.

The Premier tells us that her messaging has been heard clearly over the past two months, yet the rising case numbers and deaths tell a different story. Perhaps it is time for Berejiklian to acknowledge that she isn’t cutting through. The problem may not only rest with a small minority of rule breakers, as she suggests, but rather the government’s strategy and how it communicates it.

The Opinion newsletter is a weekly wrap of views that will challenge, champion and inform your own. Sign up here.